Next up in the FO Parade is Wisteria: 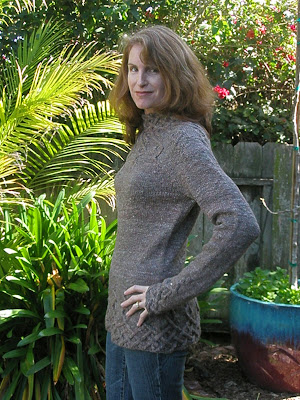 Pattern: Wisteria by Kate Gilbert from The Twist Collective. I love this pattern. I had a few problems with it, mostly from misreading the pattern (which I still hold was not entirely my fault). Mostly, though, I was able to knit from the pattern. I did lengthen the body and sleeves, and used front and back darts instead of side decreases for shaping. I also did an extra repeat of the collar pattern to make a higher collar--mine's more of a mock turtleneck than a high crewneck.

Yarn: My handspun, from Ashland Bay roving, 70/30 merino/tussah silk in the Autumn colorway. 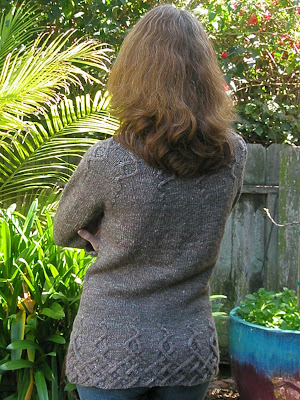 Thoughts: This project holds a special place in my heart. It's not the best sweater I've ever made, and it's not my first handspun sweater, but it is the first sweater for which I have attempted to deliberately spin yarn. I've blogged about this process several times, although I realize I barely mentioned the knitting part at all. (That's because I knitted this sweater during our Tahoe vacation, and I couldn't blog.) The yarn turned out maybe just a bit heavier than it should have been, but I was able to get gauge by knitting just a little tighter than I would have liked. This worked in my favor, actually, since the yarn grew more on blocking than I anticipated, and would certainly have grown more had I not knitted it rather firmly. 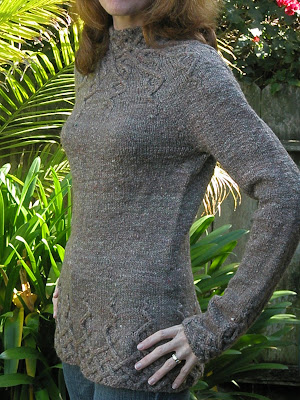 I haven't actually worn this yet; the weather hasn't been cool enough for such a warm, heavy pullover. But I am looking forward to finally putting it to use...next winter.
Posted by Yarnhog at 6:00 AM

You're amazing! This sweater is just as beautiful as the others! But I still think you need to move...that background of palmtrees and flowers should be replaced with snow;-)

Would that this parade will never end!

Beautiful! and you spun the yarn!! Wow.

Amazing! You must knit at the speed of light.

I love your elongated version. Much more elegant than the one pictured with the pattern. LOVE the cables on this one.

Wow! Your sweater turned out beautiful (not that we would expect anything less). Do you ever sleep? :)

Again I am bowled over by another kick ass sweater! You just seem to churned out these lovelies. Wisteria is just beautiful and even more special cause you spun the yarn!

Oooh, those cables at the top and bottom are just lovely!

I just love this sweater, you inspire me to knit more if that i possible:)

I love this one the best! Beautiful!