Just...tough. Every day this week, something has gone wrong at work, either personally or professionally. Most of it is not my fault, but I'm exhausted from the stress of dealing with it. I've mentioned here before that I am "volunteering" because the agency I am working for has had a hiring freeze in place for the past two years. Even in normal economic times, the only way in is to start as a student worker or the equivalent, and work for a year or so before applying for a real job. Right now, though, they aren't even hiring people for those positions. To fill the ranks, they are relying on "volunteer attorneys." Which is just what it sounds like: all the work and responsibility, none of the pay. Obviously, not many people can afford to do this. The idea is, those who stick it out will have a much better chance of getting hired when the agency does finally start hiring again. I know; it sound ridiculous. But there are reasons it makes sense for me to do this.

In my position, I am pretty much in the middle of a very extended job interview, so I constantly feel like I'm under a microscope. Whenever something happens around me that draws possible negative attention, I am hyper aware that I am constantly being assessed, and that whatever conclusions my supervisors draw may affect my ability to eventually get hired. I am much more vulnerable than someone who already has a job, because things too minor to ever get anyone fired are more than sufficient to keep me from being hired. Which makes my work life just a weeeee bit stressful.

I'm hoping to post actual knitting content this weekend, once I get a chance to get some pictures and this stress headache has subsided to a dull roar. Until then...
Posted by Yarnhog at 6:23 PM 12 comments: Links to this post

I had planned to begin an FO Parade today, but that would have required actually getting FOtos. Which I didn't. We had lovely weather yesterday (if you consider 84 degrees in January "lovely"), but it was also the first day in almost three weeks that Younger Son has been well enough to go out, so I took him to the zoo instead.

You read that right. Three weeks. The poor kid got the flu (despite a flu shot), which lasted ten days, and then he developed pneumonia and dual ear infections. He was absolutely miserable. This began (naturally) on what would have been his first day back to school after the interminable winter break. The KH and I have been tag-teaming kids for over a month now. Today would have been our first kid-free day--so of course Older Son woke up with a fever and headache, and I am home with him instead of doing the bazillion other things I need to be doing. 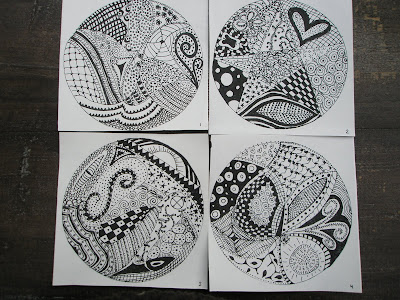 This is what I've been doing instead of knitting. My pen ran out of ink, though, so I'll have to take a break until I can get another.
Posted by Yarnhog at 11:02 AM 8 comments: Links to this post

What Sound Do Lemmings Make?

I was catching up with some of my favorite blogs today and I came across this one of Becky's. It's about Zentangles, which I had never heard of before. Essentially, it's just a form of abstract doodling. It's meant to be very Zen and relaxing. That is quite appealing to me at the moment. Most of my brain power seems to be tied up in my work these days, and with the general stress of trying to manage both work life and family life, I don't seem to have much left over, even for knitting. So this seemed like a relaxing creative pursuit, and since I am nothing if not open to the smallest suggestion, I immediately pulled out a piece of paper and a pen and started doodling.

Here is the result: 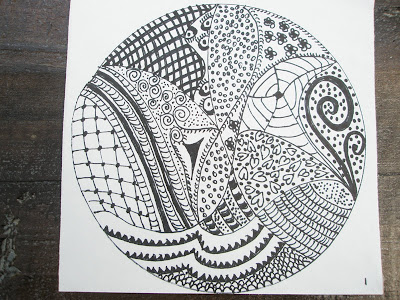 But I'm apparently not very Zen. Instead of getting into a mindless zone, I kept judging the results and trying to figure out what to do next. I don't have any particular artistic talent, so this required more effort than I expected. I don't think I've drawn anything except knitting diagrams and smiley faces since I was child.

It was fun, though. And maybe with practice I'll even learn to relax.
Posted by Yarnhog at 2:31 PM 8 comments: Links to this post 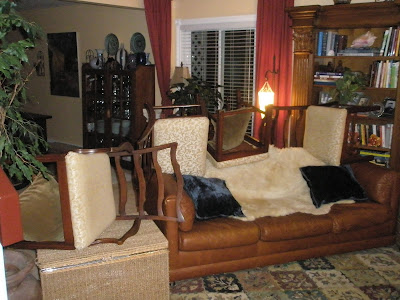 This is the sight that greeted me when I got up in the wee hours of yesterday morning. My immediate thought was, "We have a poltergeist. Well, naturally." After all, we've had everything else: kids home on break, ant invasions, chicken moult, flu, flooding, fires, skin eruptions--heck, throw in a few locusts and it's been a regular parade of biblical plagues around here. What's a little poltergeist?

But then I looked a little closer and found this: 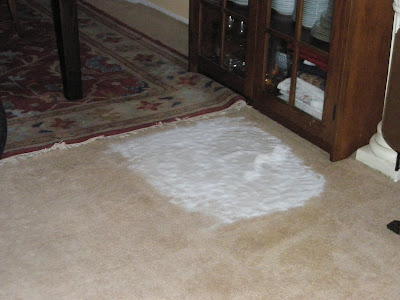 And I realized that the creative furniture arrangement was the result, not of a poltergeist, but of a frustrated husband. You see, this is what we call The Spot. The Spot is ground zero in the Great Canine Battle for World Supremacy, otherwise known as The Pissing Contest. For the past several months, Heidi and Sam have been locked in mortal combat over "ownership" of this patch of carpet in our dining room. We have tried everything to put an end to this contest. We have gated the area, laid towels and tarps, sprayed it with every "get the hell out of here spray" known to the internet, lain in wait to catch the culprits in the act, yelled and screamed, locked dogs in the laundry room, and confined them to our room at night to keep them out of the area. We have scrubbed and shampooed and swabbed and sopped and sprayed and sprinkled in a vain effort to rid the house of the vile odor emanating from The Spot. And we have failed. Failed utterly. Failed to keep the dogs away; failed to remove the smell. The night before last was apparently The Last Straw.

I was not awake for The Last Straw (praise all gods that be). I was trying to get a few hours of sleep after spending the day caring for a child who was doing his best impression of the little girl from The Exorcist, with a fever that never got below 102 degrees, even with Motrin. (The administration of which was a saga in itself. Suffice it to say, the child can't swallow pills, pukes up liquid meds, and will take only orange flavored chewables, which the KH discovered have been discontinued only after visiting five stores in search of them.)

Since I had to be in court at 8:00 am, I went to bed early, leaving the KH to watch Finding Nemo with Exorcist Boy. At some point after that, but before 1:00 am, which is when EB finally fell asleep, one of the dogs evidently upped the ante in The Pissing Contest by elevating it to A Pooping Contest. And this, it seems, was The Last Straw. The white stuff on the floor is salt. Two boxes of it. It's supposed to be a great desiccant (that's something that dries stuff out). In my mind, I picture a Great Lake of Pee under the carpet, so two boxes of salt seems pretty inadequate. But, hey, it can't hurt. I'm pretty sure nothing could be worse for the carpet than what's already on it. What you can't see in that picture is where the KH pulled the carpet up to look under it. He assures me it is not wet underneath a few feet away and that there is no Great Lake, but I find this oddly un-reassuring. (At some future date, I'll be happy to share with you my Rant Against Wall to Wall Carpeting, The Stupidest Thing Man Ever Invented. It's sure to be illuminating.)

After pouring the salt on The Spot, he created that fantastic modern art installation by piling most of the dining room furniture on top of the living room furniture to create what he tells me is a dog-proof barrier. But considering one of the dogs involved routinely jumps the entire sofa in a single bound to land smack dab in the middle of the KH's desk when she feels neglected, I remain unconvinced.

On the bright side, school break is over, the chickens' feathers are growing back, the yard is starting to dry out, and I have Raid, a fire extinguisher, and two more boxes of salt in reserve, so I'm cautiously optimistic. I don't have anywhere to sit and my sick kid is home for the fourth day in a row, but still. Cautious optimism. How's that for an inspiring mantra for the new year?
Posted by Yarnhog at 10:07 AM 12 comments: Links to this post

Rumors of My Death

...have been greatly exaggerated. I'm not dead, I'm only MOSTLY dead. (Who can name the movie?)

Things have been busy around here. I was shocked to see that I posted only three times in December. Or perhaps I should be shocked that I posted at all in December. It's a matter of perspective, I suppose. But I didn't want to let any more time go by without wishing you all a Happy New Year... 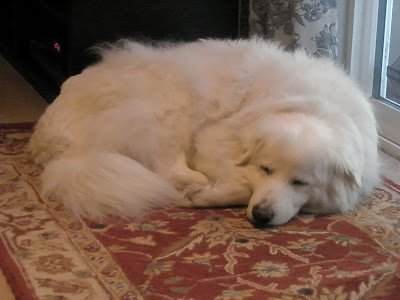 Posted by Yarnhog at 3:53 PM 8 comments: Links to this post