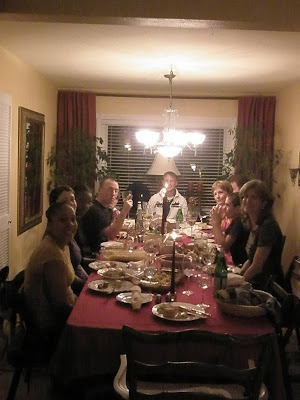 I am flopped on the sofa right now, slowly recovering from the effects of a long day of cooking and entertaining, and indulging in waaaaaay too much turkey, ham, and fixin's. We shall not mention the pie. Pie and I are still not on speaking terms.

We had a wonderful Thanksgiving here. We usually have a crowd of family and friends, but for various reasons, they were mostly otherwise occupied this year. When we learned we were only going to have seven people for our dinner, we contacted the USO and offered to host some sailors. (The "adopt a sailor" program has been around for decades--it allows local families to host sailors who are away from home for the holidays and would like to celebrate with a family instead of in the barracks.) They sent us five young--and I mean young--sailors who are currently in training in San Diego. There were three girls and two boys. I can't really call them women and men. The youngest was 19 and the oldest was only 22. They were almost all from small towns and away from home for the first time. They were all good kids and really polite and nice. And they were so darned grateful to be at our house instead of on base. They played video games with our kids and talked about their families and their home towns and some of their experiences in the Navy. And they ate. No one can eat like a 20 year old guy. It was heartwarming to see how much they all enjoyed having home-cooked food. We sent them all back to the base with leftovers and pie and cookies. 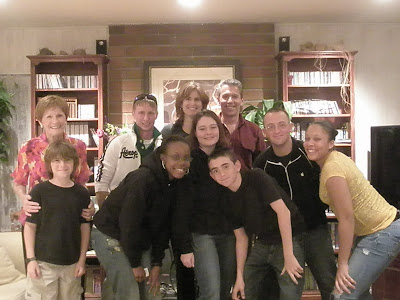 We still have a ton of leftovers. We don't like to run short of food here, so we always make way too much. We had a large turkey, a large ham, three types of potatoes, pounds of stuffing, a vat of cranberries (courtesy of my mom, who makes the most amazing cranberry sauce), enough appetizers for an NFL team, and at least six different desserts, including three pies--about which we still will not speak.

The preparation went mostly smoothly, despite the fact that we only have one not-so-big oven, which makes for interesting planning--and the fact that my husband cut his finger halfway off chopping apples for the stuffing and had to go to urgent care to get it sewn up, leaving me to finish stuffing and cooking the turkey and making the side dishes. I know this is hard to believe, but I've somehow managed to go 40 years without roasting a turkey. The simple explanation is that my husband loves cooking Thanksgiving dinner, so he always does it. I was a little concerned (and more than a little grossed out--you have to put the stuffing where?), but it turned out beautifully, thanks to DH's preparations. And he did return in time to pick up the sailors and make the mashed potatoes and gravy. Apparently the urgent care had it down to a system--he was the fourth such injury of the day! I had no idea Thanksgiving was such a dangerous holiday.

I hope those of you who celebrate the holiday had an equally lovely day and were able to spend it with friends and family. I am truly thankful for all of you!
Posted by Yarnhog at 10:37 AM 12 comments: Links to this post

I realize I owe y'all some actual knitting, and despite my lack of blogging, I have been knitting, so let's get right to the FO, shall we? 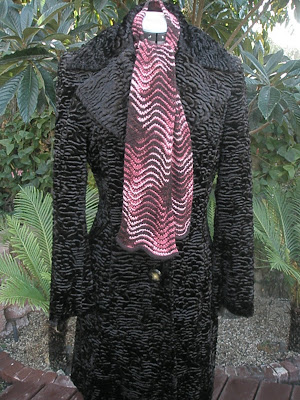 This is my Chevron Scarf, which I started about two years ago. Apparently, I am not a scarf knitter. This one would probably have sat for another two years without any further attention from me, except that Suzanne blogged about her new Signature needles and showed them in use with a Chevron Scarf, and I am nothing if not corruptible. My excuse for ordering a pair of my very own was that the only size 3 needle I had was a 40" Addi circular, and knitting a 6" wide scarf on it was driving me crazy (I know, I know...it's not a very long trip). But the theory seems to have been correct, since once the Signatures arrived, I finished this long-suffering UFO in a couple of days. It's not very long, since I only had one skein of Koigu and one of Fly Designs Monarch, but since I'll probably never have a reason to wear it, the length doesn't really matter. It goes perfectly with my brown faux lamb coat--which I'll probably also never have a reason to wear. (Gotta love the land of eternal summer.)

Now for the excuses. You may have noticed my lack of blogging. Mostly I'm just lazy. But there have been some extenuating circumstances. Such as, I got a new laptop! No, not a Mac, although I considered it. I got a Sony Vaio. I used to have one, and I loved it, but when it was time for a new one, I got an HP. It worked. Sort of. But I've had it for three years, and it was starting to fall apart. Literally: the hinge on the top broke and now it can't be opened or closed, which kind of defeats the purpose of a laptop. Also, there is a short in the screen, so that it only gives a picture if the screen is opened to exactly the right spot. It if moves while in use, the picture disappears. This is a little scary when you're in the middle of putting together a gazillion forms and documents and you're not quite sure when you last hit "save". Much as I love the new computer, it takes time to install applications and move files, and...well. You understand. 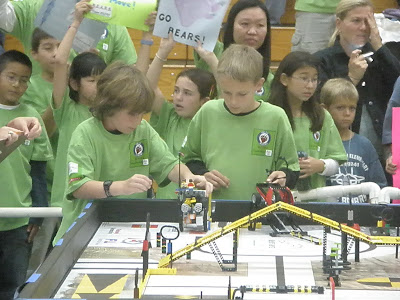 That's Younger Son on the left, intently setting up his team's Lego robot to compete in the regional FLL qualifying tournament. (In case you're not interested in clicking the link, FLL stands for "FIRST Lego League," which is an international engineering competition for 9-14 year old kids. They use the Lego Mindstorms robot kit to build robots to complete a variety of preset tasks. They also have to come up with and present a unique project to a panel of judges based on a given theme, which was "smart move" (future transportation). They are judged on robot performance, robot design, teamwork, and presentation. At the end of the day, awards are given in a variety of different categories, the finale being the presentation of trophies to the three teams that earn the highest total points.) There are about 15,000 teams internationally, with about 200 in California. There were 22 competing this day; the top teams qualify for the state competition, which will be held next month at Legoland California. Younger Son's team consists of nine 9-10 year olds. They've been working on their robot and project for several hours a week for the past couple of months. They have awesome coaches and are sponsored by BAE Systems. And I guess it paid off: 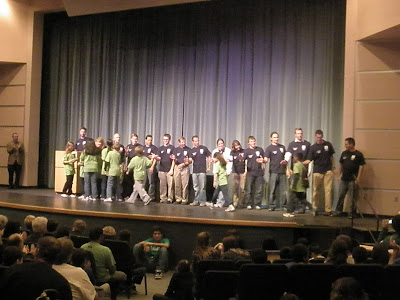 Here they are at the end of a very long day, collecting their awards! 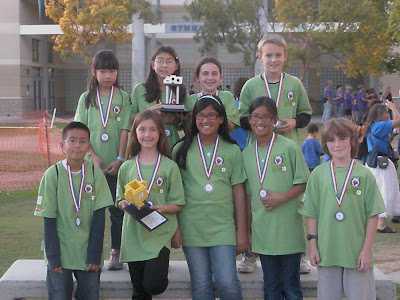 They took second place for Robot Design, and first place in the overall competition! They were so excited. They were also exhausted, as the day began before dawn and went until 5 pm. Now they have three weeks to recover before the next competition.

And that brings me to my third excuse for poor blogging performance, which may be a little startling to those of you suffering through storms and cold weather. This is the peak of fall gardening season here in San Diego. I love to garden. Although spring is my favorite season, there is definitely something to be said for fall, with its cooler temperatures after a long, hot summer, and the chance to clear out all the summer overgrowth. This year, there was even more to do, since the puppies ate my entire yard over the summer, and we had the pool redone and built a deck. After several weeks of work, I've got it just about under control: 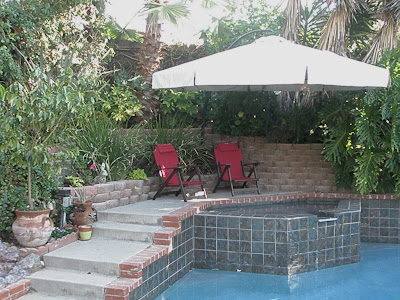 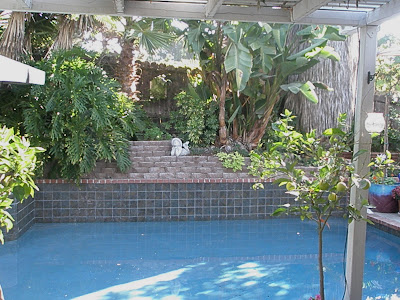 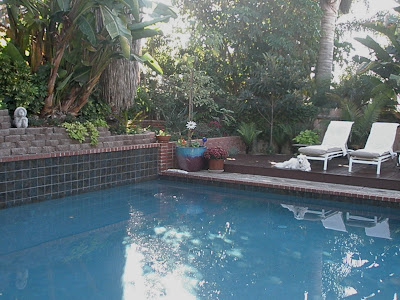 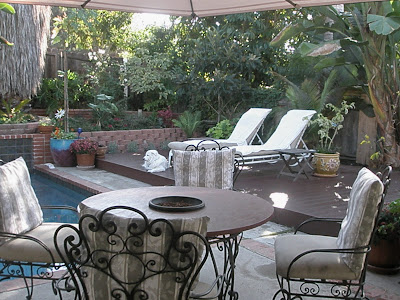 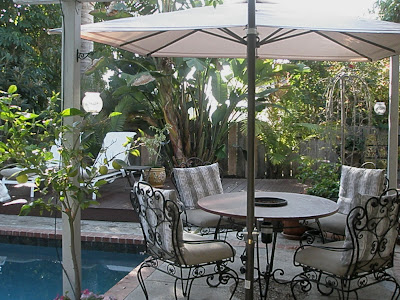 This is one of those times when I really appreciate living here. Because, really, how many people can do this in the backyard in the middle of November? 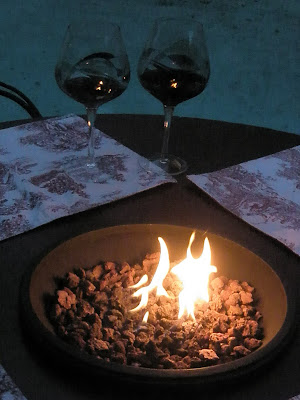 Posted by Yarnhog at 9:16 AM 16 comments: Links to this post

You Asked For It

Okay, here it is: 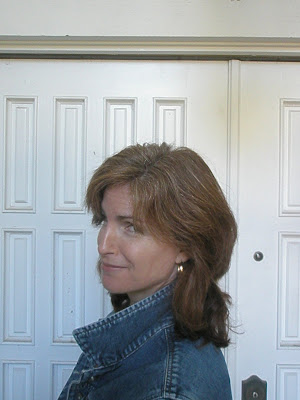 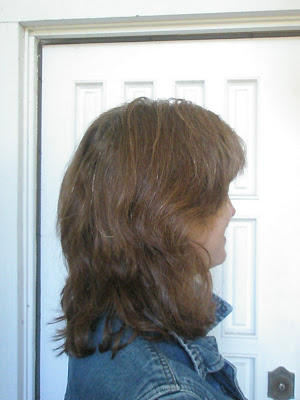 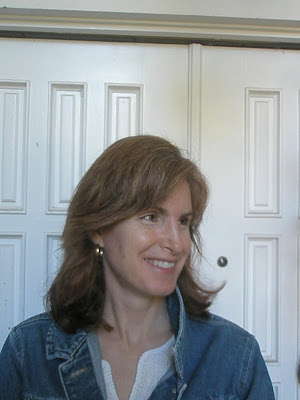 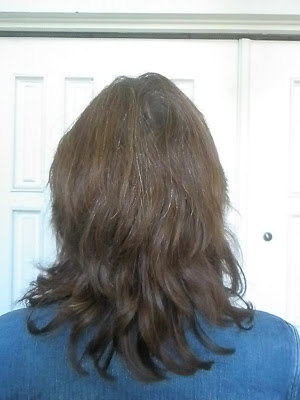 Whaddya think? Pat Benatar or Keith Partridge?
Posted by Yarnhog at 6:00 AM 22 comments: Links to this post