I am a faithful person. Devoted to my husband. My children. My friends.

Just not, apparently, to my knitting. 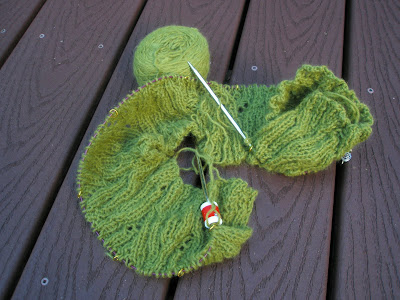 I cast on for Eve's Ribs, as I said I would. And I was excited, too. It's a lovely pattern and I'm doing it in a lovely yarn. But...it's lace. It's easy lace, lace in dk weight yarn, lace on big needles, but...it's lace.

I suppose it was inevitable. I suppose, given my history with lace, that I shouldn't have expected to be able to remain faithful.

It's just a little embarrassing how quickly and completely I succumbed to the charms of a new, non-lace project. 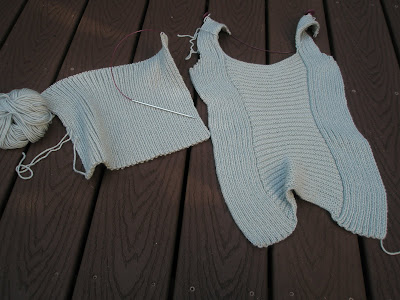 This is Ribby, for lack of a better name. I know it looks a little, um, weird, but I think it's going to work out just fine. Right now I'm planning for it to be a tank top to wear under a suit, but I may make short sleeves instead. I'll decide after I get it assembled. The pattern is nonexistent; I'm just winging it. The yarn is Rowan Cashsoft DK, which I ordered by mistake a couple of years ago, thinking it was Rowan Cashcotton. I've never used it because I'm not a huge fan of light grey generally, but it's the perfect color to wear with a black or charcoal or navy suit, all of which I own. 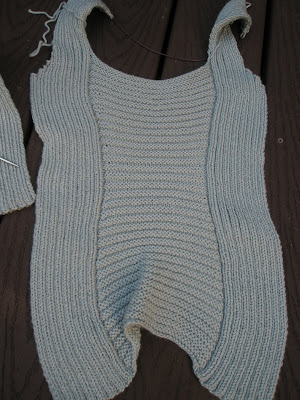 The thing is, cheating on Eve's Ribs seems to have opened some kind of door. Now all I can think about is all the other great patterns waiting for my attention: the cardigans, the pullovers, the jackets, the coats...

This morning I was checking out Rav and found this. It is a modification of this Rebecca pattern. I was instantly assailed by that "MUST HAVE" crazy and clicked over to Rebecca to download the pattern. While I was there, it seemed a waste to click "buy" for just one item, so I also downloaded this.

Now I am knitting away on Ribby, fantasizing about the newest patterns in my queue of ten bazillion others, considering yarn and color options, figuring out which needles I can free up.

Damn. I admit it. I'm a knitting slut.
Posted by Yarnhog at 8:30 AM 3 comments: Links to this post

And the Winner Is... 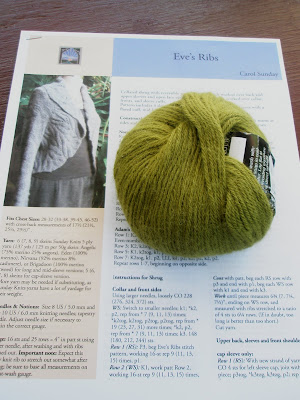 This will be my next knit. It was not in my queue. It does not qualify as office attire. It is not the dressy black wrap I so need for going out at night in the fall and winter. In other words, it is a total lark. I can't justify it in any way, except that I have the perfect yarn (Cascade Indulgence) in the perfect quantity in my stash, and it's not earmarked for anything else, and I just feel like knitting it, darn it!

The pattern offers several sleeve variants. I like the long, flared sleeve best: 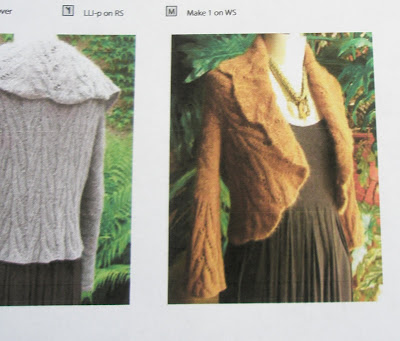 It is not an easy pattern to modify, so I'm not going to. I figure the alpaca/angora blend I'm using, combined with the lacy ribbed pattern, will probably stretch like crazy and end up fitting me just fine. It's a loose knit anyway, so fit is not so critical. For once, I'm just going to blindly follow the pattern and see what happens. That will be an adventure all by itself!
Posted by Yarnhog at 4:05 PM 4 comments: Links to this post

And here it is: The Noro Log Cabin Afghan! 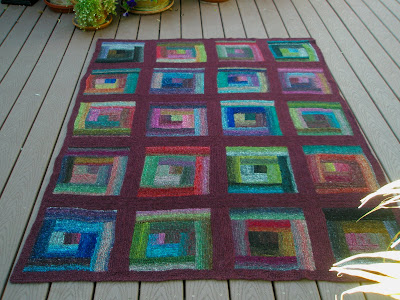 I started this back in March and fairly quickly worked up all the very addictive squares. But then it took a while to plow through all the assembling, which involved miles and miles of garter stitch and almost as much grafting. 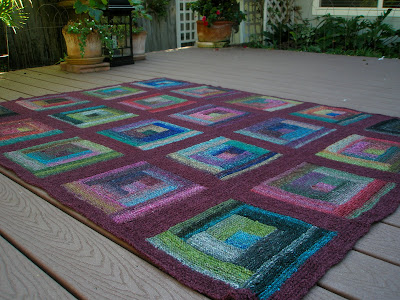 In the end, it was totally worth the trouble. The afghan is warm and colorful and lovely to curl up with.

I should have made my strips narrower, since a) they ended up wider than the "logs" and b) I ran out of yarn before I could make the border as wide as I wanted. But calculating exactly how wide they needed to be to use all my yarn without running out too soon would have required...well...math. And I try to minimize the need for math in knitting, because, as I have proved time and again, math lies. I know there are those of you who disagree that math is inherently dishonest, and maybe even those who would suggest that I--myself--might in some way bear some responsibility for the way math has repeatedly failed to conform to my knitting reality, but I reject those arguments and repeat: math lies.

So, after much consideration, I decided to use the "ah, screw it" approach to making a border and just started single crocheting around and around the edge of the afghan until I ran out of yarn. Which, naturally, happened two feet before the end of a round. At that point, I extended the "ah, screw it" approach to its natural corollary, "ah, f*&! it!", ripped back to the end of the side (not all the way back to the beginning of the round, which would have made the border the same width on all sides but also narrower on three sides), and tied it off. I figure, no one will ever notice that one side is one row narrower than the other three, and I used up all but a few feet of my yarn. 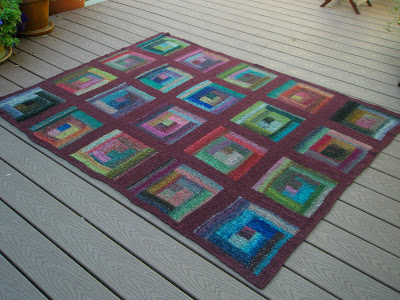 Being familiar with the ways of Noro, I soaked this baby overnight in some water with a good dose of fabric softener, and it's now drying out on the deck. Since I've also finished Morgaine (modeled pics coming soon!), I am now without project on the needles! I will be remedying that situation in short order, as soon as I decide what I feel like knitting next. I am getting ready to start a new job in a formal office environment (more about that later), so I am trying to come up with a sweater I could wear in that setting. It's the sort of place you have to wear a suit every day. I was thinking a fitted shell or sweater for under a suit, but I been able to find any patterns I think would work. I'm not averse to designing my own, but I don't really have a vision for it. Any suggestions?
Posted by Yarnhog at 6:00 AM 15 comments: Links to this post

Son: Mom, which one is better, Harvard or Yale?

Me: Because I went to Harvard.

Son: Wow! No wonder you're so smart. I'm going to Harvard, too.

I'll be accepting donations to his college fund, in case anyone's interested.
Posted by Yarnhog at 11:07 AM 6 comments: Links to this post 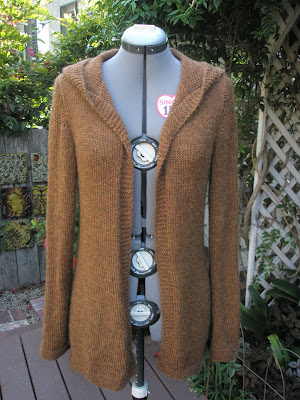 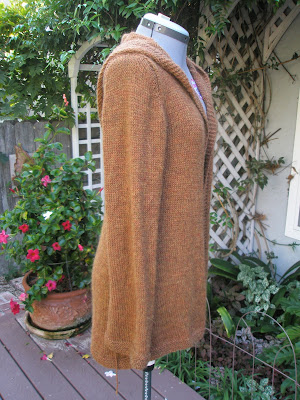 There is nothing quite as satisfying as finishing the knitting and just...putting it on. No piecing, no fitting, no sewing. Especially no sewing. 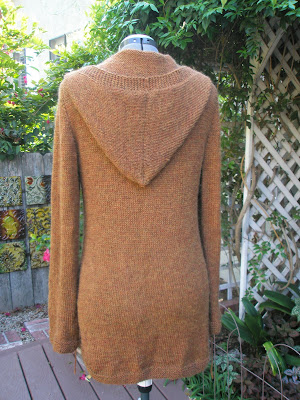 It doesn't get you out of blocking, of course, which is why these are still not modeled shots. When I finished knitting Morgaine this afternoon, I gave her a nice bath and then hung her on Bertha to dry. (That's what constitutes blocking around here.) As I expected and planned, she has grown significantly in length, and I think she'll fit perfectly once she's dry. 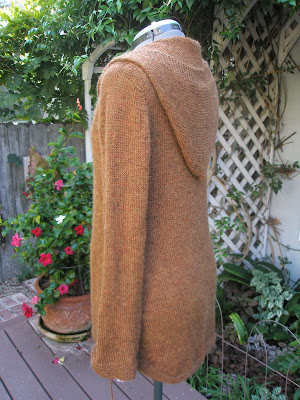 I have some pretty ceramic buttons I've been saving for a while which I think will work well on this. I just need to sew them on and make a few button loops, and this one will be an FO.

Come on, Fall!
Posted by Yarnhog at 4:45 PM 8 comments: Links to this post

...but keep the old, one is silver and the other gold!

Was anyone else a Girl Scout? Did you have to sing that song every single meeting, too? The wretched Beatles medley after John Lennon was assassinated was almost a relief.

Here is proof that the FO parade was not just an excuse to cover the fact that I haven't been knitting. I have indeed been knitting. Here is the current state of the Noro Log Cabin blanket: 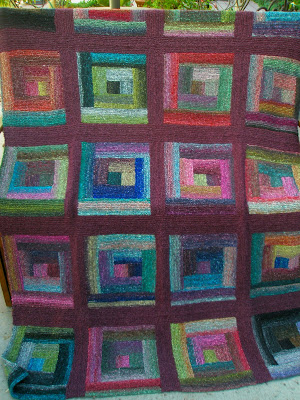 Yes, that is all the squares, edged and grafted together!

And here is the yarn I have left: 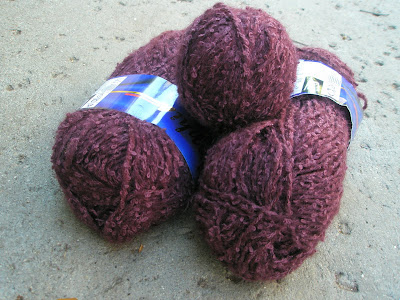 Although it looks like a fair amount, my calculations indicate that there is not enough to do the matching border I intended. My calculations consist of considering that it's taken me six and a half balls so far. There are three long strips and two short strips. I have two and a half balls left, and to do a matching border would mean knitting a bit more than two long strips and two short strips. Even in my math-resistant world, this equals not enough yarn.

I am taking suggestions. This yarn is discontinued and utterly unavailable (I've looked). It is impossible to match, being a wool/cotton/nylon baby boucle in plum (I've tried). So my options are to make a smaller sort of border, like maybe an applied I-cord (god save me), or to pick an entirely different yarn for the border. I am leaning toward the narrower border, but I'd love to hear other options. I have spent too long on this to give up now, no matter how tempting it may seem at the moment.

And this is Morgaine, which is what I am calling my version of this pattern--the one I didn't order because it was only available by snail mail and I am not that patient. 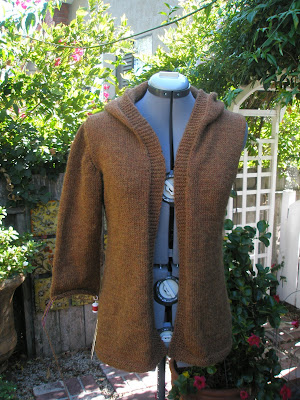 Instead, I just used the photo as a guide. And I've saved about as much time as you save when you get caught speeding and spend half an hour exchanging pleasantries with the Highway Patrol. I have ripped almost as much as I have knitted. Natch. But I think I have it worked out now. I had to set it aside for a couple of days when I ripped the sleeve cap for the second time, but I'm reasonably happy with the current version of the cap and I think it will end up perfect after blocking. 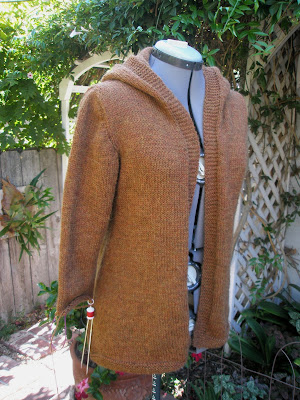 This yarn is Ultra Alpaca, so it will undoubtedly grow like crazy in length when it hits water. I am counting on it, in fact, since I deliberately shortened all my measurements to accommodate this growth. (Now watch; this will end up being the only non-growing alpaca in history.) 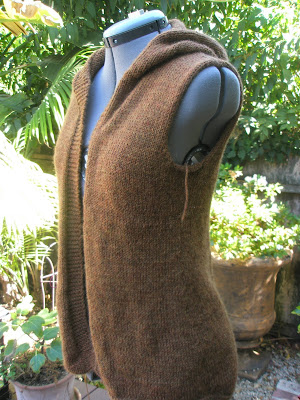 I gave it a hood, which will benefit from a good blocking. 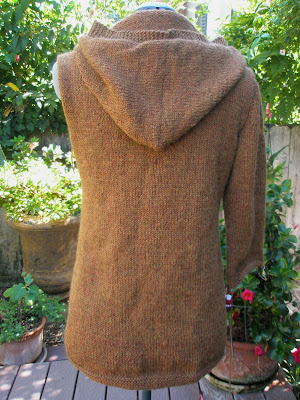 I also did a shirttail-esque short row hem, which is longer in the back than the front. I was thinking sort of a medieval cloak shape. The added advantage is that it covers my butt without hanging to my knees in the front. 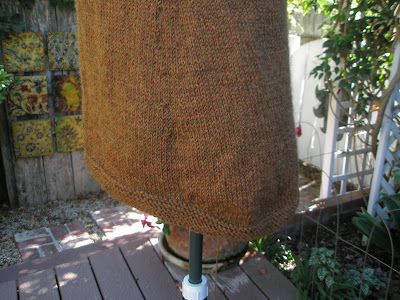 These are my only "real" WIPs right now. "Real" WIPs are those which stand a chance of being finished in the near future, as opposed to the other sort of WIPs, which are just UFOs in denial. (We won't discuss how many of those I have floating around.)

And you know what that means, don't you? It means I will be picking a new project in the next few days! Ah, the possibilities...
Posted by Yarnhog at 4:06 PM 12 comments: Links to this post