This is one I've blogged about ad nauseum. It is a long, sad story of love gone wrong. Way back in November, I started this with great enthusiasm for both yarn and pattern. Alas, before I was even done with the knitting, I began to suspect that the yarn was not a good match for the pattern. Once again, I was seduced by a variegated yarn that was beautiful in the skein, but knitted up was...not. 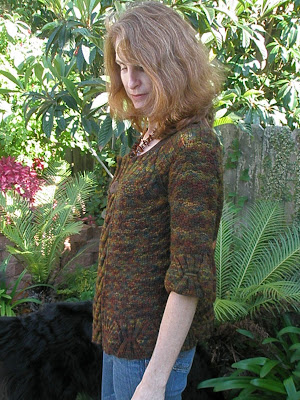 I finished it anyway, was dismayed at its ugliness, and buried it in the closet. A few months later, I decided to give it another shot by overdyeing it. This worked pretty well, toning down the more acidic tones and blending the colors together without completely obscuring them. But I still didn't much care for the shape. A few weeks later, I finally got around to buying some buttons for it, and sewed them on. And you know...I sort of like it! 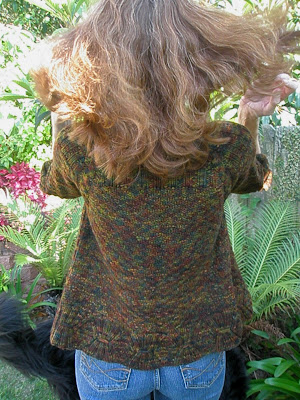 Yarn: Handpaintedyarn.com bulky merino in the Noviembre colorway. About 7 skeins?

Mods: Quite a few. Longer, narrower, different stitch pattern for the body and sleeves (that Trinity stitch is a b*tch and sucks up yarn). 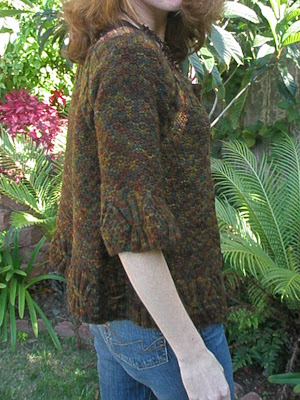 I still don't know whether this is cute or looks like a dumpy housecoat, but I've worn it once and got two compliments (from people who didn't have to), so I think it's probably okay. What do you think?
Posted by Yarnhog at 6:00 AM

I really think you need to move to a colder climate so that your BEAUTIFUL sweaters will get the wear time they deserve! ;)

I like it on you! Being tall and slender, you can carry that style off and make it look like STYLE. Me, I'd be answering questions about when the baby's due. *snarl* In my next life I want to be taller... But seriously, very cute sweater!

Very Cute sweater! I think the overdyeing was definitely the right choice for the yarn. I feel the same way about the Trinity stitch. Which stitch did you replace it with? I love the texture.

I really like the unconstructed look. It doesn't look frumpy at all, it's cute and chic! (Complimenting because I want to.) ;)

I like it! I think it's cute and different. I would wear it.

I like it. It's different! Thanks for the parade of FO's. i look at them and have dreams of someday!

Not a dumpy housecoat. I love the way it matches your hair.

I like it! I think the colour shades look fine - better than the orig. shade. What stitch did you use to replace that trinity (should be eternity) stitch?

It's not your normal, tailored style, which is probably why you're hesitant, but it is sooooooo cute on you! Keep wearing it!

Very cute, and very much in style (I see the unstructured look everywhere lately). The overdyed colors look much more like autumn leaves than the original colors, at least on my monitor. Wear it!

I think it looks great and not at all dumpy. The overdye looks terrific too. You can still see some variegation but it's nice not nasty. Wow, will this paradeof sweaters ever end! You're a sweater factory!

I'm going with cute. It's cute. And so are you!