After staring at the Aran Cardigan hanging over a kitchen chair for two weeks (where I deliberately left it to spur myself to some sort of productive action), I finally tackled the zipper installation. It's not my favorite activity, but sometimes only a zipper will do. A few people commented on an earlier post that they have avoided attempting to install a zipper because it seems so hard. I've made two zippered cardigans before this one, both before I learned that installing a zipper is supposed to be hard, so I was never afraid to try it. In all honesty, I can assure you it is not hard in either concept or execution, even with my negligible sewing skills. If I can manage it, you surely can! For those of you who might not have tried it before, I took pictures of the process so I could prove it to you.

If you recall, the zipper I ordered for this sweater turned out to be much too long. So the first order of business was shortening it. Thanks to Sue, I knew that I needed to remove the zipper stops at the top, cut the zipper to the right length, then reattach the stops. The little things at the top are, naturally, the stops: 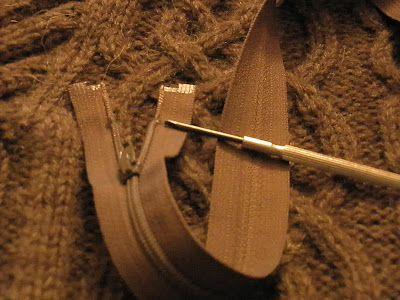 Alas, after twenty minutes with a tiny screwdriver and a needlenose pliers, I discovered that, in an excess of caution, the manufacturer of this particular zipper not only crimps the stop in place, but also glues them down, to be sure they won't come loose. And I'm sure they would be happy to know that nothing short of a nuclear blast is going to separate one of their zipper stops from the zipper. Not to worry, though. I happened to have a zipper repair kit handy, and there were extra stops in the kit. So I put the zipper in place and decided where to cut: 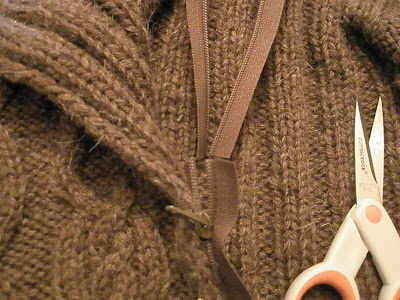 [This, by the way, is the actual, real color of the sweater, at least on my monitor.]

Unfortunately, as soon as I cut it, the fabric began to fray, so I sealed it with some clear nail polish and then installed the new stops by crimping them over the end of the zipper with the needlenose pliers: 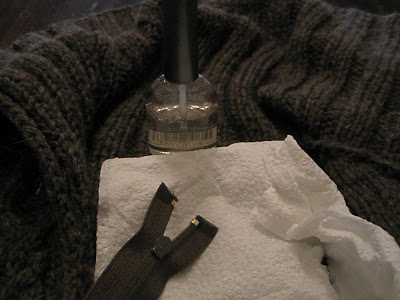 With the zipper shortened to the proper length, I began pinning it in place: 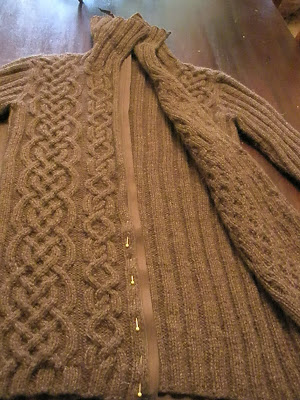 Leaving the zipper zipped together, I positioned it so that the selvedge stitch covered half the teeth of the zipper. I like my zippers to be hidden. By positioning the selvedge stitch half over the teeth on each side, the zipper will be completely covered when the zipper is closed. It's important not to stretch the knitting while you're pinning so that you don't end up with a weirdly puckered zipper when it's sewn in.

Once I had the first side pinned all the way up, I started sewing. Here you can see how the selvedge stitch partially covers the teeth of the zipper: 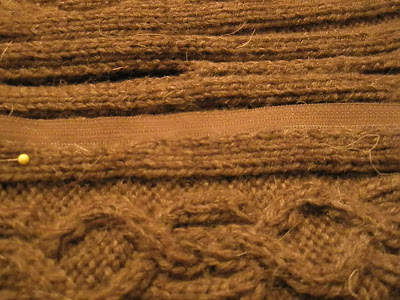 I sewed straight through the zipper and the knitted fabric one stitch in from the edge, and as close to the zipper teeth as possible: 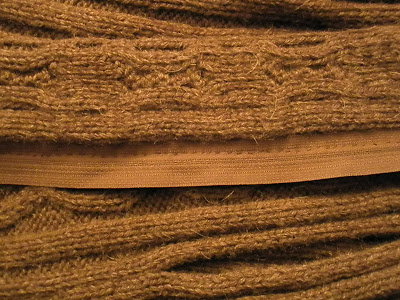 I tried to make small, even, straight stitches, but as you can see from the back of the zipper, I'm no seamstress. That's okay; no one will see the back of your zipper. You don't need to know how to sew. Just stitch as neatly as you can and take your time. It's not fun (at least, it's not fun for me), but it's not difficult.

Here's the first side all sewn in: 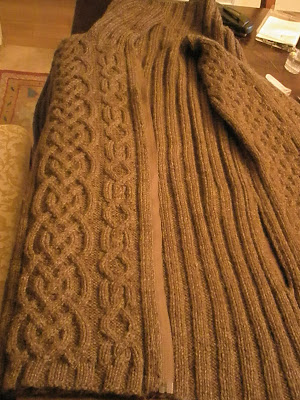 To sew the zipper to the other front, I unzipped the zipper and pinned the loose half to the opposite side. (You could pin it in place with the zipper closed, but I find this too difficult.) 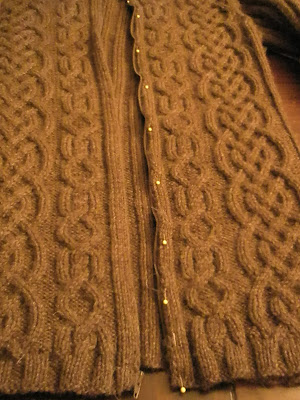 To make sure I had the zipper lined up properly, I then rezipped the zipper: 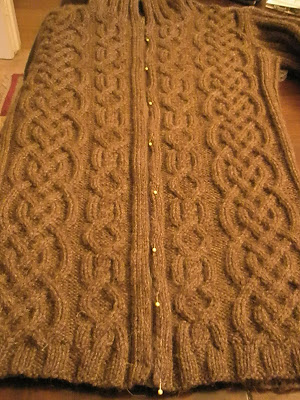 It seemed to be lined up correctly, so I unzipped it again and sewed the second half of the zipper in place, and voila! 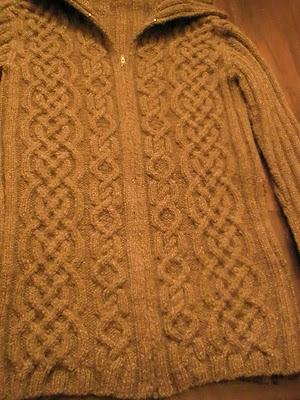 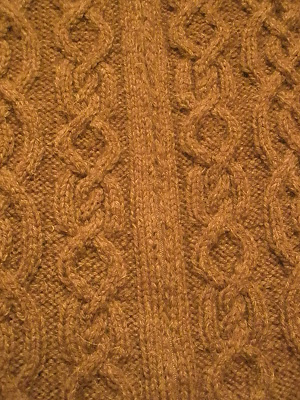 Now if I can just bring myself to tackle the concept of zippered pockets...
Posted by Yarnhog at 7:19 PM

OMG! Its truly beautiful!!! I love it.

Incredible! That sweater is gorgeous, and your zipper installation was perfect! Congratulations!

P.S. The color showed up a lovely warm brown this time, not the gray I've seen before.

I'm sorry, but I remain unconvinced that any part of that was easy! You are just entirely too clever and should never be allowed to use the word easy again. It doesn't mean what you think it means!

That said, I can't wait to see it modeled... it's just gorgeous.

I have sewn clothes for years- including inserting zippers- and I have knitted sweaters for years, but I've never combined the two to make a zippered sweater! Inserting the zipper just seemed too difficult. Thanks for showing how to do it! The sweater is gorgeous!

Your sweater came out just amazing! I'm a tad curious though - did you machine-sew the zipper, or by hand?

Fabulous job and the sweater is absolutely gorgeous too. I'm so jealous!

That's really cool. I should bookmark this for later reference...

I am not a fan of hand sewing or putting zippers into hand knits. It never goes quite that smoothly for me. Yours came out great!

Beautiful! I love how you shortened the zipper. I am with you on the hand sewing....not my thing either :)

beautiful! can't wait to see it on.

Ok, you truly get the MacGuyver award for this little stunt. Does admitting that I would have just bought a new zipper make you think less of me?;)

The sweater is a stunner!!

HOORAY! So glad you were able to shorten the zipper. It looks amazing.

I find it interesting that the stop was glued! In all my years of shortening zippers and doing alterations I have never encountered that before. I used to add glue when I shortened and replaced the stops for my own piece of mind but never found it on a zipper before.

Great thinking on stopping the fraying, I should have mentioned that some do that. Sorry! Those zipper repair kits can be lifesavers. I also sometimes save the bottom stops and pulls from old jeans because somehow DH manages to break them. That trick has saved many a pair of jeans over the years.

Just thrilled that my suggestion helped.

EXCELLENT! I have never done anything that needs a zip. I don't feel at all confident in attempting it.

fantastic job - it came out beautifully! And well done documenting it for the knitting community!