So I swatched all those yarns I showed you in the last post, hoping to come to a decision about Surface. And I wasn't really happy with any of them. On good advice from many of you, I nixed the variegated right off. The Roma, although it claims to be a dk weight, is really a worsted weight and knits up best around 19 stitches to 4 inches, instead of the 23 stitches to 4 inches called for by Surface. The Cashsoft is a lovely yarn with a beautiful sheen, and is the most likely candidate of the three, but I'm still hesitant about that silvery grey. While I was dithering, I dove back into the stash and found this: 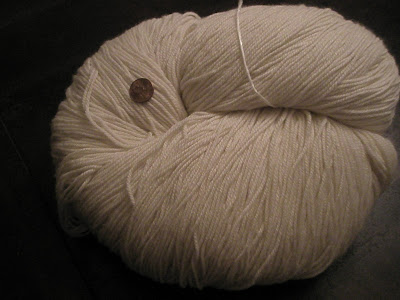 This is one big hank o' yarn. I got this through a Rav destash a few months back for maybe $20. It's a pound of merino/bamboo. The only label is a scrap of paper reading: "Untitled. 60% merino/40% bamboo. 3 ply 1240 yds/lb." There is no yarn weight given, but judging from the yardage per pound and the appearance of the yarn itself, it's around a dk weight. At least it seemed worth swatching.

So the first order of business was to turn this big hank o' yarn into a big ball 'o yarn. Now, you all know I love my ball winder and swift. But there's no way my ball winder can handle a pound of yarn, and I didn't want to cut this up into smaller balls that I would have to splice together later. I'm guessing the bamboo will make spit splicing difficult and who wants more ends to weave in? No, I decided, this yarn needed hand winding.

But not by me. I don't like hand winding. Fortunately, I have an in-house master winder who graciously accepted the challenge of hand winding this massive hank of yarn. I have no pictures of the procedure, because the master winder threatened to do nasty things with my camera if I took any. He evidently prefers to keep his secret identity just that. Suffice it to say, it was a big job. He wound steadily for an hour and a half. (He also made me rub his shoulders this morning because they had cramped up so much from the experience that they woke him up in the middle of the night.)

And this is the result: 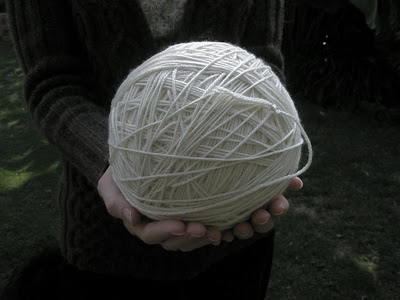 That is one big ball 'o yarn. (Yes, that is the Aran Cardigan I'm wearing. I got tired of waiting for making pockets to sound exciting and crocheted the pocket openings shut so that I could wear it now and still go back later and insert pockets. It worked beautifully, but that's another post.)
Posted by Yarnhog at 10:56 AM

Okay, that is unbelievable! I can't stand winding by hand so I'm very impressed.

I hope you made breakfast for the 'master winder' ;)

That looks to me like one big honkin' snowball. Not that you have those in SoCal, but still.

Wow. You seriously owe him another neck massage and taking him out to brunch today.

You should consider renting your resident hand winder...I have some delicate lace weight that can't be done on the ball winder that needs the skills of a master winder such as him.