I've been having an unusually difficult time choosing a pattern for my next project. I am in a woolly sort of mood these days, probably because the weather is (finally!) consistently in the 50's and 60's, which is as close to winter as we get around here. I have an urge to knit a zippered aran cardigan from some brown fishermen's wool I have in the stash. One would think, of all the thousands of aran sweater patterns, it should be easy to pick one that suits and just get on with it. Not so. After a truly absurd amount of time perusing the options on Ravelry, in my various books, and in every back issue of every knitting magazine I own, I finally found a winner (Ravelry link). Ironically enough, it was already in my queue, which is, of course, the last place I looked. Alas, it is not available for download or individual purchase, and is from a four year old magazine. But, oh, I love the internet! A copy should even now be winging its way toward me--I hope.

In the meantime, I am unwilling to cast on anything else, since I know I will want to start the aran as soon as I have the pattern in hand (yes, I really do try to keep to one primary project at a time). I have been keeping busy instead by modifying some of my FO's to better suit. As I've mentioned before, I've come to realize I like my sweaters a bit longer than I usually make them. So I've been altering some of my favorites. This one, for example: 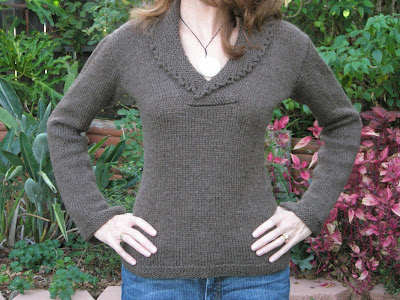 This is my Not-So-Sahara, knitted from lovely Cascade Eco Wool. I wear it almost constantly. But the wool is springy rather than stretchy, and I find it tends to shrink up as I wear it after blocking, causing me to tug at the bottom and cuffs. So I picked out the bound off edges (just one more advantage to top-down knits) and lengthened them about two inches. Now it looks like this: 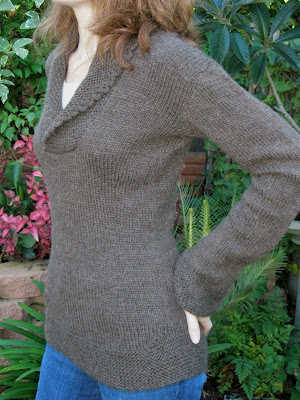 I'm much happier with it now.

I also fixed one of my husband's sweaters, which I knitted about three years ago (the yarn is discontinued Cervinia Londra--wool and acrylic; the design is my own). 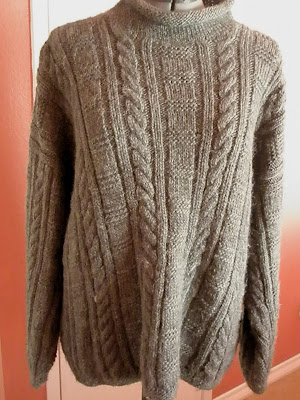 That's Bertha modeling it. She's smaller than my husband, so it's a little drapey.

This one was done in pieces, bottom up, and sewn together. So it wasn't until the whole thing was done that I realized the sleeves were long enough for an orangutan. He's worn them rolled up for years, but it's always bugged him. So I shortened them. This proved to be much more difficult than I expected. I figured I could just cut the sleeves where I wanted the cuffs to start, pick up the live stitches, and work downward. It works well in theory. It was hugely frustrating in practice. The yarn is slightly fuzzy, and has been worn and washed a lot. It was tough to locate individual rows, much less individual stitches. And then there are a multitude of cables and textured stitches, which complicated things. It ended up taking me several hours to get all the stitches onto needles in a way that made sense. And then I realized that I had made all the sleeve increases below the elbow, so that after cutting off the bottom four inches of sleeve, I had a really, really w i d e cuff to work with. I ended up decreasing a lot of stitches, hiding the decreases in both the last pattern row and the cuff itself. I was afraid I was going to end up with a weird sort of puffed sleeve effect (anyone remember the "puffy shirt" from Seinfeld?), but it seems to have turned out pretty well. Here's a close up: 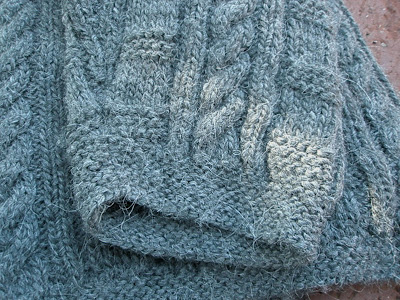 My husband is happy with it, anyway, which is what matters.

Next up is going to be this: 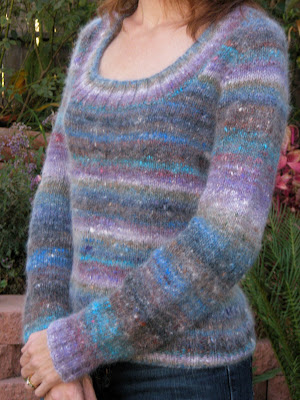 This is another recent project, my Kochoran Scoop. There is really nothing wrong with this, except that I think I would wear it more if it were longer. Since I have more of the yarn I used, and this one is also top-down, it's a simple thing to add a few inches to the bottom. That should keep me busy for this evening, at least.

And finally, I've set to work on a new spinning project. I have about a pound and a half of merino/silk roving in a silvery-grey with green and burgundy accents that I think would be perfect for Wisteria. 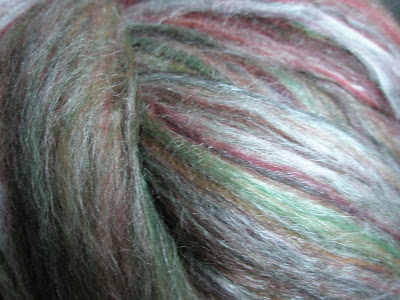 I was pretty ho-hum about that particular pattern, until I saw this version (Ravelry link). I think the stripey-ness of the semi-variegated yarn used in the original turned me off; I love the more subdued look of the heathered grey. I spun up some of my roving last night, and it is coming out a muted silver with a beautiful silky sheen. 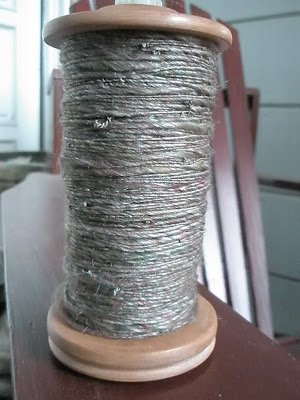 Color in spinning is utterly baffling to me. I never have the slightest idea how a roving will look spun up--or if I do, I'm completely wrong. The spun singles here is almost solid, although it's a little darker in person than in the picture. I like Wisteria better in a solid color, so that's okay. I think I'm spinning to get about the right gauge (after I ply it)--although spinning gauge, too, is always a mystery to me--so it may work out. Don't look for an immediate cast on in any case; I'm not a very fast spinner, and a pound and a half is a lot of roving.

There you have it: what a sweater knitter does when she doesn't have a sweater on the needles. I mean, other than sit in a corner, rocking and moaning and sucking her thumb.
Posted by Yarnhog at 2:49 PM

i like how you are fixing up some of your knits. I am doing the same. I have a one that is just way too big for me.
when you work so hard on something it should be just how you like it!

That cable/rib cardigan will suit you nicely when it's finished. It looks as though it was designed for you.

As for Wisteria- I think Kate Gilbert is a genius of sorts.

I like how you're fixing your knits. Definitely a benefit to knitting top down.

I've made that Cable Rib Cardigan and love it. I have gotten more comments and compliments on it than any other item that I've knit. I expect you should expect the same. :D

I concur on lengthening your sweaters -- they are even more flattering now. Top-down really has some important advantages.

nice, very nice. I think not having anything to knit is like not having a good book to read. I feel lost without one.

I never, ever, had the guts to modify a sweater the way you do. I think I'll have to start knitting top down (never done that either!)

It's so nice, having so much to learn! Thank you for sharing!

I also like my shirts/sweaters/cardigans longer than typical. It is actually one of the reasons I started knitting. Of course in my mind I would knit the "perfect" sweater first time out :).....here's to hoping I get one right soon.

Aw, man! I wanted to knit that, too! Now I have to find someone with a back copy of Vogue Knitting?!

I was going to suggest you design your own aran and I see you are more than capable when I see your hub's sweater. Your choice on Ravelry is very nice and I am sure you can knit this without a pattern. Just by looking at it you can get the cabling and then with a calculator you can get the rest. Thus making it your won creation from start to finish. You can do it.

The roving is spinning up beautifully. I too am clueless about how a roving will look when spun. It's always different that I expect. Maybe you should design a Sinfeld inspired Puffy Sleeved sweater. That's one of my favorite episodes.

Oh that Rav pattern is so you, can't wait to see you knit that thing up in like a weekend!

That's a lot of sweater surgery; you are the boss of your knitting! Well done, intrepid one!

Wow! Would you come fix my disasters, pretty please? :)

That is so funny. I was also in the mood to knit myself a cabley zippered cardigan and I picked that same pattern after some ravelry searching. I was unsuccessful in finding a copy of the pattern and then got sucked into other projects. Let me know what you think of it. I might renew my search.

At Accent Packaging Equipment we offer packaging solutions for companies looking at cost effective packaging equipment. If you need results in weigh filling, liquid filling, labeling or packaging, you came to the right place.labelers