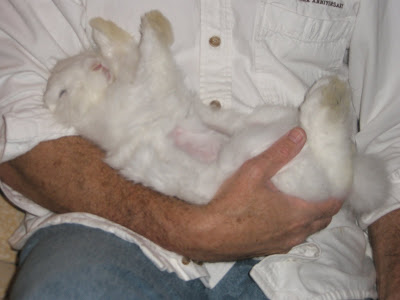 It is my new spinning partner, Eli the Angora Bunny!

He just got spayed and had a haircut, which is why his belly is shaved and his coat is so short. And yes, I did say "spayed" even though he's a male. Evidently, the vet thought he was a female and only discovered the error AFTER he tried to spay the poor boy.

I got Eli from a local rabbit rescue. They were worried no one would take him because of his hair! Silly, silly non-spinners. He is still a baby--about four months old--so he'll get bigger. If he's anything like my old angora bunny The Beast, he will get a lot bigger.

The KH was totally opposed to the idea (he still hasn't recovered from the addition of Peanut), so I picked Eli up while he was out of town. Yeah, I do stuff like that. To my delight, Eli immediately charmed the KH, who discovered he has a new napping buddy. 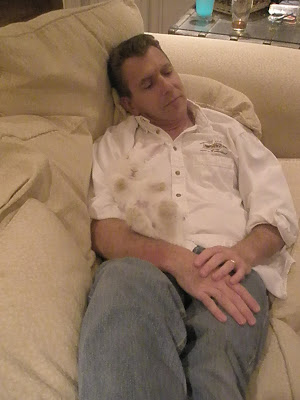 And he moved Eli's hutch from the backyard into his home office. 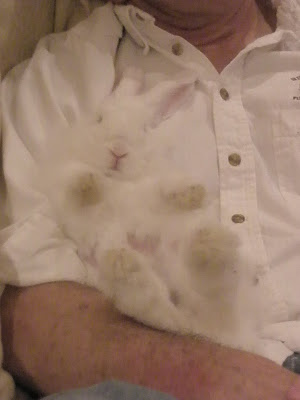 Because, really, who could resist that furry face?
Posted by Yarnhog at 9:47 AM 12 comments:

Guess What This Is? 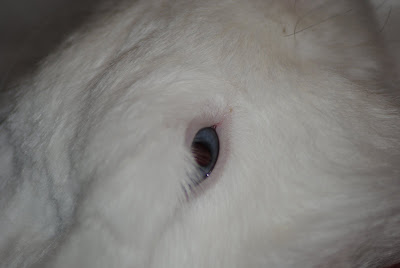 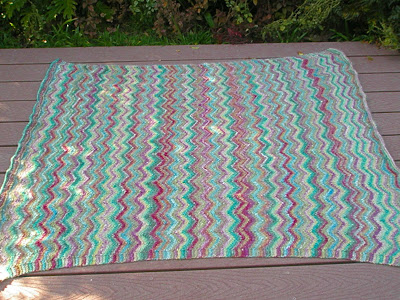 I finished Mom Blankie today. It wasn't the ten days I so hopefully planned on Christmas Day, but I did finish it in just about a month. 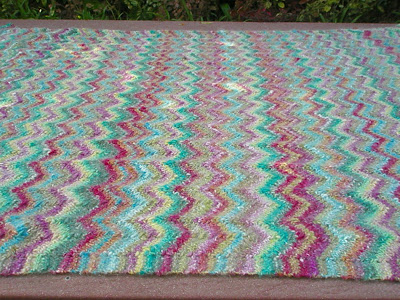 Mods: None, other than the size, and the fact that I used self-striping yarn instead of sock yarn scraps. Very easy and relaxing pattern, perfect for tv knitting! And now, perfect for tv watching, too. :)
Posted by Yarnhog at 5:24 PM 4 comments: 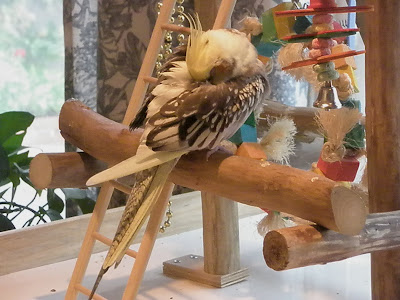 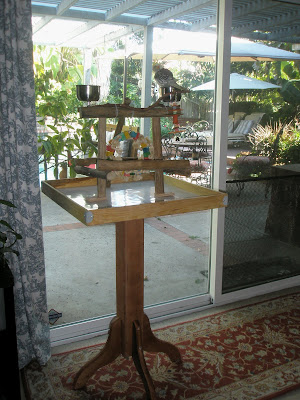 I went to the birdy store for some toys for Peanut today, and while I did not come home with the adorable Cockatoo I'm seeing on the side, I did come home with this awesome play stand for my tiny bird. (It's hard to get a picture in front of a sunny window.) 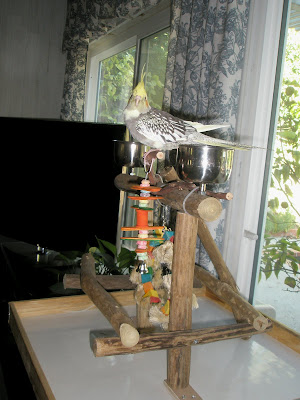 Peanut willingly stepped up on the stand, before she realized this meant she would not be on my shoulder, my chest, my finger, or any other part of her favorite perch. Which is the point, from my perspective. This gives her a place to hang out in the same room with the rest of the family, without actually having to be ON a member of the family. It is also mostly out of Kozmo's range. He could certainly knock it over if he wanted to, but at least he can't grab her on his way past, and I won't leave them together unattended. 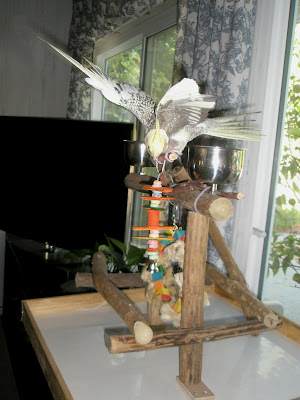 This is how Peanut reacts when Koz gets too close. I call this her Eagle Pose. She spreads her wings as wide as they will go to make herself look as big as possible, and then she hisses like a little dragon! It's incredibly cute, and it really gets the point across. Koz does an abrupt about-face and leaves the room every time she does it. They say it's not the size of the dog in the fight that counts, but the size of the fight in the dog. I guess that applies to birds, too!
Posted by Yarnhog at 2:06 PM 7 comments:

And Then There Were Two 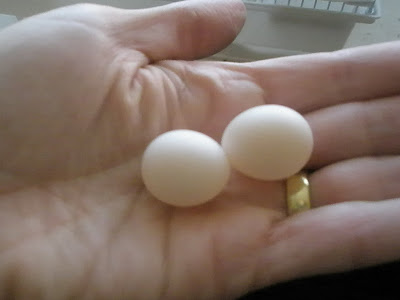 Yes, my Peanut is a fertile little birdie.

I expected this today, so I've been putting her in her cage every hour or so to see if she would lay in the "nest." She didn't, but she did lay this one in the cage instead of on Younger Son, so I'm calling it an improvement. She doesn't seem to buy into the whole "nest" idea; she actually took the other egg out of the nest and left it in a corner of the cage...but not the same corner as where she laid this one. She seems a little confused about how this whole "roosting" thing works.

I put both eggs back in the nest and brought Peanut back downstairs (she won't start incubating until she's done laying).

She enjoys sitting on my shoulder or chest and chattering to me or preening herself, but she really loves my computer keyboard. She climbs onto it and sticks her head under my typing fingers to get petted. It's super cute, but inconvenient...and getting bird poop out from between the keys is kind of a pain. So I relocated her to a different spot on the computer: 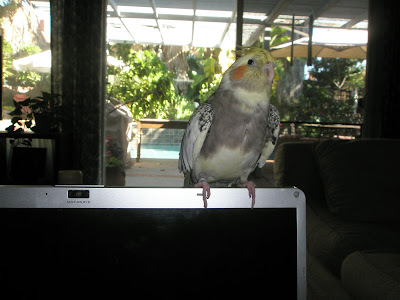 She loves it. She is sitting there, enjoying the warmth, chirping away, and preening herself as I type.

We did have a near-disaster yesterday. I was bringing her downstairs on my shoulder when she abruptly decided she wanted to fly. She fluttered down the stairs and into the family room, where she landed ON Kozmo, who was sleeping on the floor! He reacted as one would expect an 85 pound dog to react when rudely awakened by the two ounce usurper of his master's affection. Fortunately, I got to Koz before he got a grip on Peanut. He was mightily offended by being dragged away by his tail (the first thing I could reach), but far more offended when Older Son swatted him on the nose! No one in this family has ever so much as scolded him, so the nose swat was a grave offense. I pointed out to Older Son that Koz didn't do anything wrong (he was just being a dog), and OS made every effort to make up with Koz, but it may take a while.

Peanut was unharmed, except for the loss of a tail feather and some dog drool on her back. She was completely unfazed by the incident and remains convinced of her own superiority.
Posted by Yarnhog at 1:14 PM 4 comments: 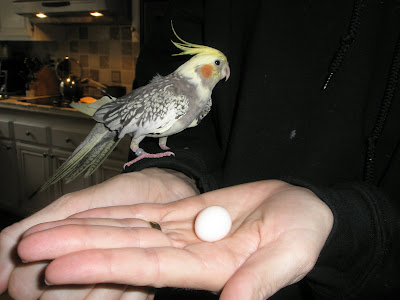 Only I would buy a male bird that turns out to be pregnant.

Apparently I can expect Peanut to lay between one and seven more eggs in the next week or two. They may or may not be fertile, since I don't know whether she mated while she was living with the other cockatiels.

Is there any way this could be the KG's fault?
Posted by Yarnhog at 8:00 AM 8 comments: 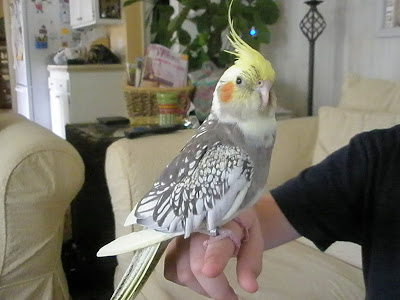 We have a new baby in the house! This is Peanut. He is a male (we think) cockatiel. He is a hand-raised baby, so he's very tame and friendly. He's about eight months old, so not really a baby anymore. More of an adolescent. And judging from his immediate and slightly obsessive interest in me, I think his little birdie hormones are in full swing. 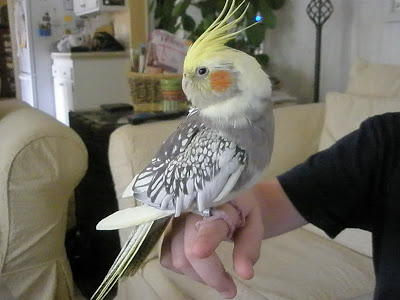 He is technically Younger Son's bird (as you can see from the "perch" in the pictures). For the past several weeks, I have been considering getting a larger bird to keep me company during the day (since the dogs do nothing but sleep). I've been to every bird shop in town, talked to every rescue, and visited about a hundred different birds. Then I took Younger Son with me to my favorite bird shop and we came home with this little guy for him. It turns out, though, that the bird doesn't care who he was purchased for. He would like nothing better than to spend his whole day climbing on me and getting kisses. I had no idea birds could be so cuddly and affectionate. Or so smart! And the bigger birds have nothing on this little guy for personality and interactiveness. 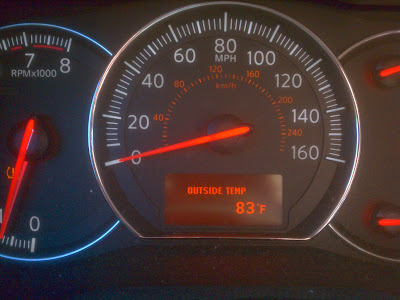 The thermometer in my car yesterday at lunchtime.
Posted by Yarnhog at 7:27 AM 5 comments: