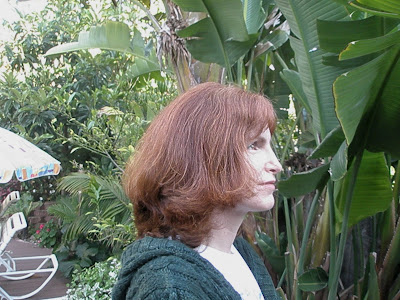 Okay, so it's not that bad. I just couldn't resist a nice bit of alliteration.

I got my hair cut today. This is always a mildly distressing experience for me, but was an even more serious prospect than usual today, since I have been unable to get an appointment with my usual stylist for the past three months and had to go to someone else. She's been cutting my husband's hair for years, and she's great with a crew cut, but that's not really the look I'm going for, ya know? It's not that I don't trust her, it's just that past experience has taught me that I do not communicate well with hair stylists. Somehow, whatever I say comes across as, "Yes, please chop off as much as possible, and while you're at it, make it look like I crossed paths with a rabid dog on my way home."

So I was nervous about the whole thing, but I couldn't take one more day of pulling my hair back into a pony tail to keep it out of my face while I'm working and I didn't have a better option. 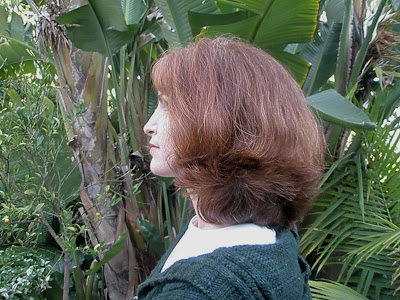 I tried to explain my usual style to her, but I guess it wasn't that easy to decipher from the grown-out mess on my head. There was a lot of snipping and combing and snipping and blow-drying and snipping some more. Quite a bit more snipping than I'm really comfortable with, to tell you the truth, and only my over-developed sense of courtesy--and the fact that the woman had a pair of razor sharp scissors to my head--kept me from screaming, "Stop with the snipping already! It's short enough! What are you DOING back there anyway?!"

And then, although I clearly asked her to dry it so the ends curled under, every time I looked up, she was drying the ends with a distinct outward flip. A lot of flip. Enough flip to skateboard off of. But, hey, at least she was done with the scissors, and flip washes out.

The end result is significantly shorter, poofier, and more...uh...helmet-like than I was going for--although that last will probably change after I wash it and do my usual sleep-on-it-wet-as-a-styling-technique routine. 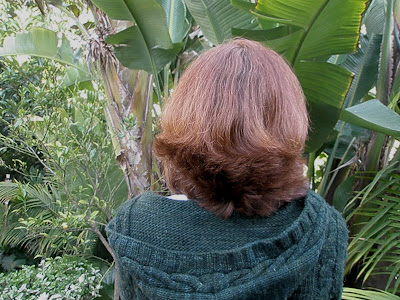 I think I'm more or less okay with it, though. At least the pony tail is gone.
Posted by Yarnhog at 5:56 PM 10 comments: 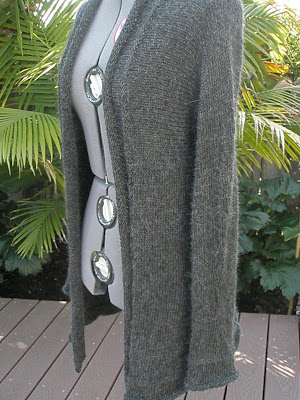 On the knitting front, at least.

Warm and Fuzzy (Summer Solstice) is blocking! I finished it last night around midnight and left it soaking in a warm bath overnight. 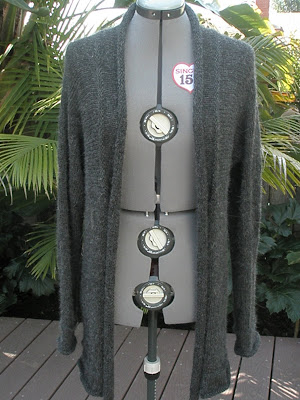 As I expected (and planned for), the alpaca grew like crazy in length when it hit water. The yarn also softened up nicely and became delightfully drapey. 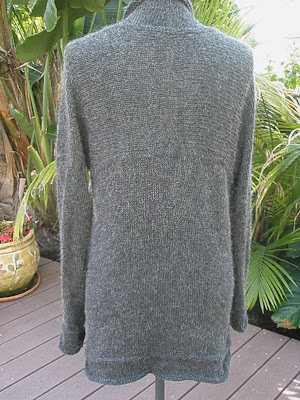 The end result is a wrap-like sweater that falls below the hip on me--and looks much better on me than on Bertha.

The design is fun to knit, with almost no finishing. I did add a few details that weren't in the original, like these purl stripes on the cuffs, hem, and collar. 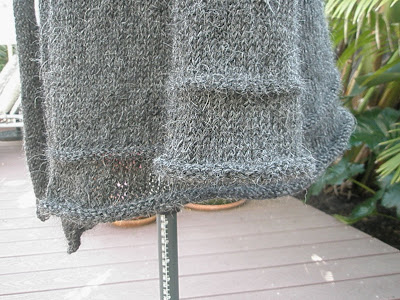 It's almost dry now, and I did a little test try-on. It fits perfectly! I'll be taking it to work with me tomorrow, but I'll try to get modeled shots next weekend.

While I was at my unpaid--but you get to pay for gas and parking and all your other expenses--job, my husband was, with great relief, sending out a large bill to a client after a solid week (and weekend) of work, payment of which...well, let's just say it would be a nice idea, what with property taxes and income taxes being due this month, in addition to all the other bills, and the kids still wanting to eat and all.

And then Sam started bleeding from his mouth and the rest of the day pretty much went to hell.

The KH examined Sam's mouth and found...something bloody. So he took Sam to the vet. While sitting in the examining room, he got an email from the client--the one who now owes us a substantial amount of money. The sense of the email was, "I hate you and I'm not paying." And then the vet came in and told him Sam has a tumor. Numerous tumors, actually, but the big bloody thing in his mouth was the one that needed emergency surgery.

As in, you're not getting out of here without forking over the mortgage payment surgery. Sell your firstborn and all his toys surgery. Cough up a kidney, because that's the only way you're going to pay for this surgery.

'Cause this is a freakin' GREAT week for that.

I'm trying to be philosophical here. I really am. But the past couple of years have been a long, hard haul, and there is no end in sight. I try every day to be cheerful and optimistic and say things like, "It's going to be okay; we just have to keep going. Eventually it'll get better. It's just a matter of time." Most of the time, I even believe it. But today I'm wondering if I ought to just give it up and change my name to Job. My cheerful has gone missing and hasn't left a forwarding address. Stick a fork in me, because I'm done. Th-th-th-th-th-that's all, folks.

But I don't have time for a nervous breakdown. The kitchen needs cleaning, the laundry needs doing, the house needs vacuuming, the sick dog needs meds, the kids need help with their homework...

I'm generally a pretty monogamous knitter. I don't like to have a lot of WIPs going at once, because I find it distracting. A sweater, maybe a bigger project, like an afghan, maybe a sock--that's about all I can handle at one time.

Which makes it tough to explain what's happening around here lately.

I have had less time for knitting the past few months, since I started working full time away from home. You would think that would cause me to cast on fewer projects than usual. Oddly, the opposite seems to be true.

This is what's been going on: 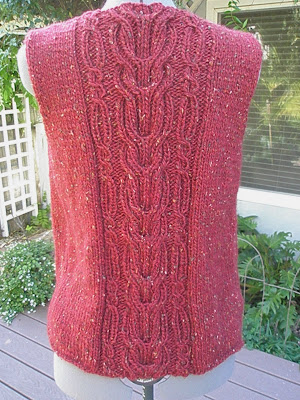 This is Red Ruffles. I've blogged about it before (you can use the search box if you're interested--I'm not). It's been around for a while, and it went on hiatus after I discovered I had totally screwed up the right front. Eventually I got around to ripping and reknitting that front, sewed it on, and knitted the first sleeve. Which I then decided looked waaaaay too wide. So now the whole mess is sitting in the WIP basket waiting for me to accept that I'm going to have to rip and reknit that sleeve. 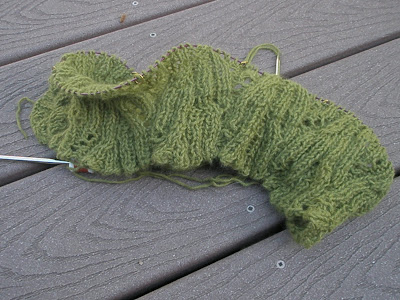 This is...something green. I know I blogged about it, and there has to be a pattern around here somewhere, but I don't have the energy to dig it up and figure out what's supposed to be happening with it. 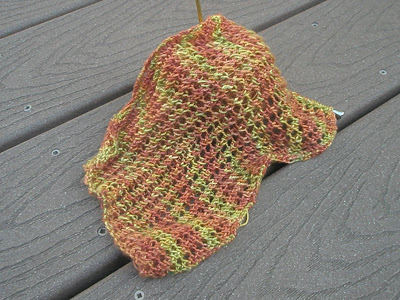 This is the World's Easiest Lace scarf, which I blogged about here. As you can see, nothing has happened on it since that post. 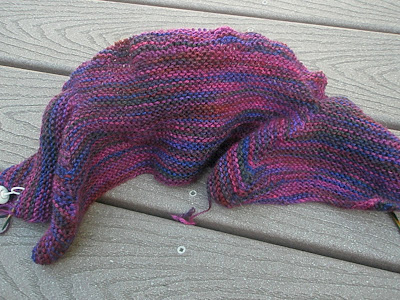 This is my very first BSJ, knitted from some brilliant purple and pink Mountain Colors Bearfoot, my favorite sock yarn. It is for the same childhood friend who received Icarus as a bridal shower gift. She is due in May, so at least I have a while longer to procrastinate on this one. 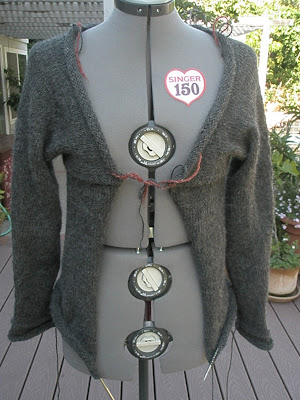 And then there's this. This is Summer Solstice by Heidi Kirrmaier. Mine is a winter version made from 100% alpaca. And before you point out that I live in San Diego and don't need a 100% alpaca sweater, you need to come spend a day where I work. I don't know what's wrong with the ventilation system in that place, but I swear I saw icicles hanging from the vents on Friday. I don't like sitting at my desk wearing my suit jacket, although it's preferable to having my nose dripping all day. So I thought I'd make a basic grey sweater to keep in my office for when the temperature drops below freezing. 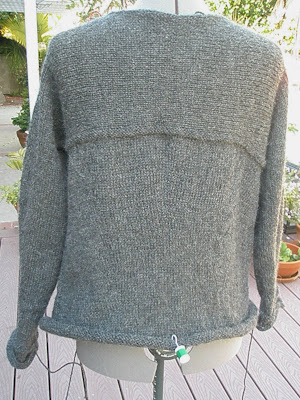 The construction on this is very interesting. I eventually gave up on trying to comprehend it and just followed the pattern. It seems to be turning out right. 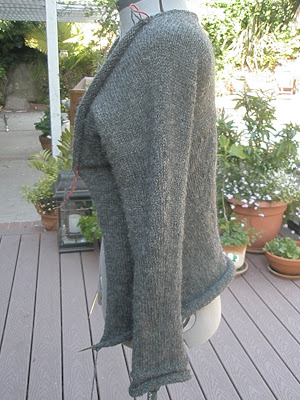 There's an awful lot of plain stockinette, but that's not generally a negative for me. If I'm getting a little tired of it, well, I'm almost done. The best part is, the sleeves are knitted first, so when I'm done with the body, I'm really done! Oh. Except for the collar, which also runs down both fronts. Yeah. That could take a while longer.

Somewhere around here there is also a camisole waiting for straps, some black cashmere that wants to be a turtleneck, and half a lonely sock, hoping for a little attention, but I think you get the idea.

I'm not sure what's going on, but if you don't hear from me for a while, send help. I may be buried under the ever-growing pile of WIPs.
Posted by Yarnhog at 3:51 PM 3 comments: 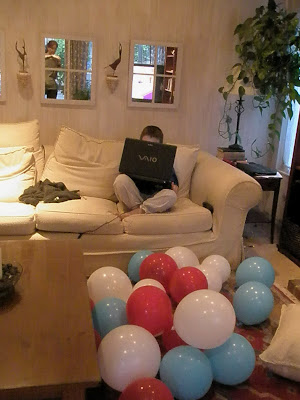 They don't need a reason for balloons. 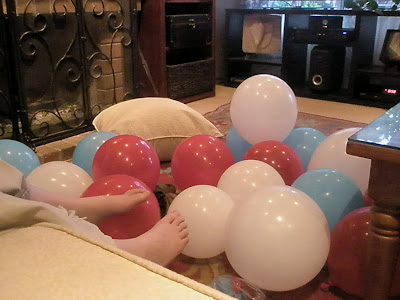