I had the urge to knit a lace scarf out of some Sea Silk I had in the stash. Alas, we all know my unfortunate history with lace knitting. I wanted to actually enjoy the experience, and after a couple of hours on Ravelry, it became obvious to me that I was going to have to come up with something a whole lot easier than any of the lace scarf patterns available online. 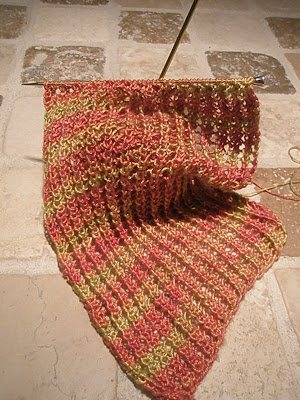 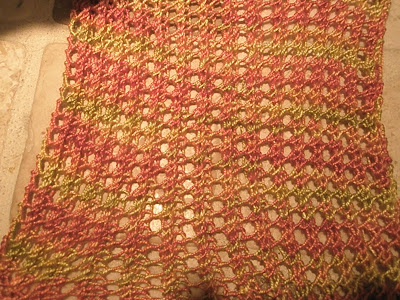 I had a hard time coming up with decent pictures, as it is dark out and my kitchen lighting doesn't seem to be the best for this sort of thing. But I hope you get the general idea.

Without further ado, here's the pattern:

Cast on a multiple of three stitches, plus two for the edges. I used 47 stitches, which is giving me a scarf about 8" wide with my chosen yarn and needles. Your results will, of course, vary. If this matters to you, knit a swatch.

Knit until you're sick of it, or the scarf is long enough, whichever comes first. Cast off. Block it if you want to.

The pattern as written creates a scarf that is entirely lace, with a single-stitch garter border. If you want more of an edge, cast on a few more stitches and work those in garter stitch. If you want a shawl, cast on more stitches; just make sure you use a multiple of three for the lace section. I think this would make a great shawl or throw in worsted, or even bulky weight, yarn. 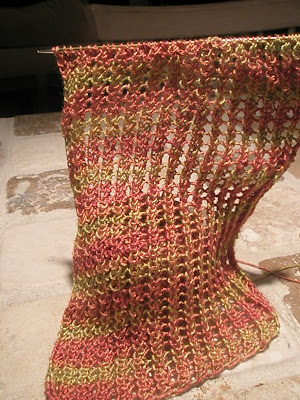 The pattern looks great from both sides, which I think is important in a scarf.

So...anyone feel like knitting along? I only have about eight inches done, so you have plenty of time to join me!
Posted by Yarnhog at 6:50 PM 10 comments: 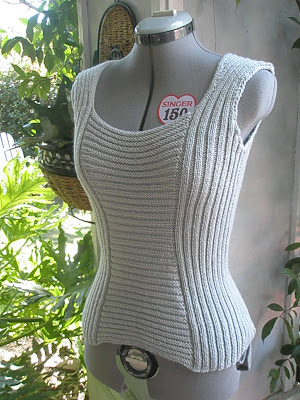 I blogged about this one here. Again, a while ago. It doesn't look a whole lot different now, but I thought it deserved an official FO post.

This is an interesting design, if I do say so myself: nothing more than basic ribbing, with a little shaping, but the horizontal ribbing in the center panel makes for a pretty dramatic design feature and adds curves where they don't really exist. 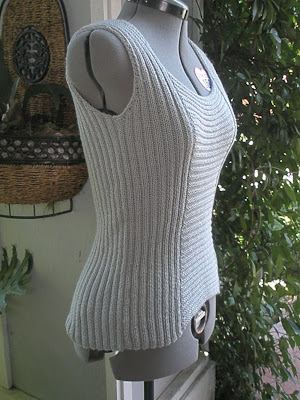 I used some Rowan cashsoft dk I had in the stash for a long time (I ordered it by mistake, thinking it was cashcotton). I debated for some time about what sort of sleeves to make for this. In the end, I decided to make it a tank top, mostly because I wanted to move on to something new and this was the fastest finish. 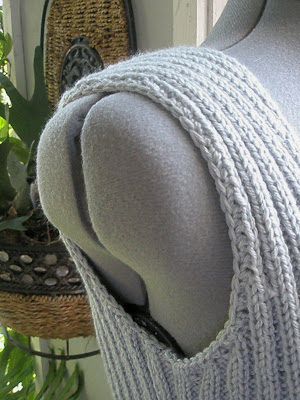 I did a quick single crochet finish around the armholes to give them some structure. 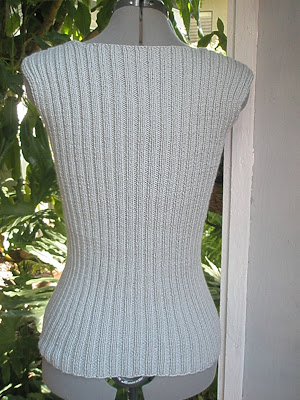 I've never actually worn this. I think it would be more wearable with sleeves, and some day I may get around to knitting some. In the meantime, I think it would make a good vest over a shirt, but since that's not really a wardrobe concept I've ever embraced, it mostly just sits on a shelf in my closet.
Posted by Yarnhog at 9:27 AM 14 comments:

Look! Up in the Sky! 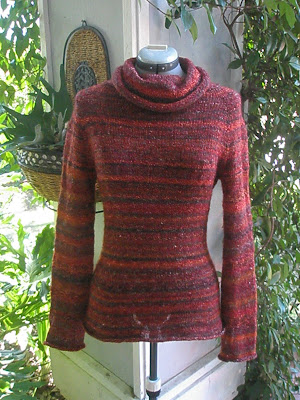 I blogged about this one way back here. It's been done for a while and I've been wearing it regularly. In fact, it needs washing, so I decided to get some pictures before I put it in to soak--because, you know, I'm always convinced my knitting is going to hit water and dissolve. It hasn't happened yet, but I'm still on the alert. 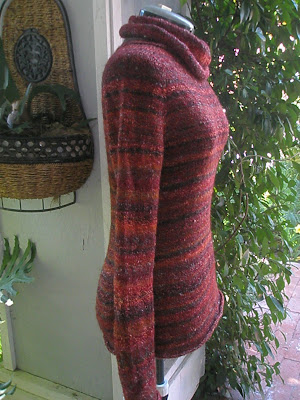 This is the one I've named Flame D'Amore. It's based on Francis Revisited, which is a lovely pattern all by itself, but I'm not one to follow a pattern. I worked this from some handspun merino and merino tencel which I plied together for a fingering-dk weight yarn. I knitted it at 19 stitches to four inches for a light, drapey fabric. I added plenty of waist shaping using darts both front and back. 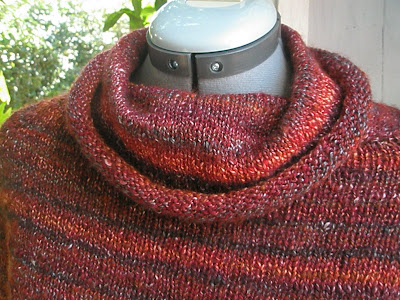 I did this one as a top-down raglan and knitted the cowl neck on afterward. I picked up stitches and worked the sleeves top-down in the round, so there was no seaming at all. We love that! 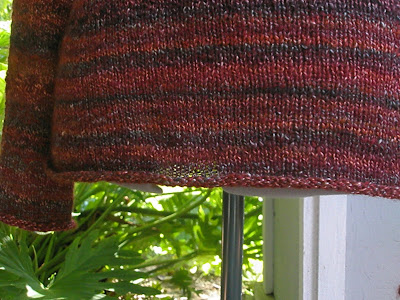 I left the edges to roll for a light, casual finish. They rolled a bit too much initially, but after a little steam blocking, they relaxed nicely and gave just the baby-roll I was hoping for.

The fabric is surprisingly warm, considering the light weight. I've even worn it to work under a suit a couple of times. It looks great with a black suit; the reds and blacks add a nice pop of color. Since I wear black suits several times a week, I'm always on the lookout for flattering bright colors to wear with black.
Posted by Yarnhog at 1:49 PM 10 comments: