Sparkly and I have come to an agreement. I will spend every waking moment with it, and it will cease to torment me with gauge problems, seaming nightmares, and fit issues. So far, we've accomplished only the first part of that agreement. That's the problem with these good time floozies: high maintenance, no substance.

I bit the bullet and took the first sleeve out of the body (again--for those who might be counting, that's three times). I ripped and reknit the last part of each sleeve cap to make them rounder. Then I sewed both sleeves into the body--with nice, rounded seams. 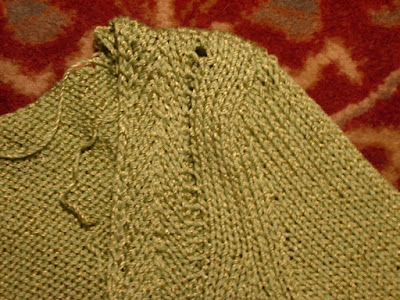 As I started to seam the side, however, that little gauge problem with the stockinette stitch back returned to bite me in the butt. The back was at least an inch shorter than the front. I sat and thought about that for a while. I definitely did not want to remove all my hard-won seams and rip out half the back to lengthen it. I also did not want the weird line that would result from picking up and knitting down from the cast on edge. So instead, I used the trick I figured out when I wanted to redo the ribbing on the Split-Personality Cardigan. I wove a needle through the back, picking up one leg of each stitch. Then I cut the knitting and picked out the loose threads, leaving live stitches on the needle. Instead of attaching the yarn and knitting down, which would have been visible (the stitches would have been upside down), I knitted a separate edging piece in the same lace I used on the front, and then grafted it (kitchener stitched it) to the body. 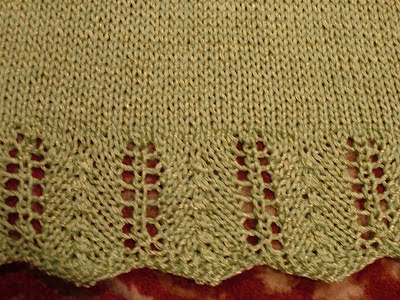 Yeah. 64 stitches of grafting. No joke. I pulled it a little too tight, which is why it looks like there is a seam there. I tried to loosen it, but there was no way. I'm hoping (all together now) it will block out.

I nearly have the little monster sewn up--just one more side/sleeve seam to go, but I've hit my limit for today. At least, I think that's what the twitch over my eye is telling me.
Posted by Yarnhog at 7:13 PM

I am so incredibly impressed with your persistence, endurance, committment and all words that embrace just what an all-round patient and clever person you clearly must be. I am inspired.

It's also a really cool solution to keep in mind and while I don't tell this to everyone, I secretly love the kitchener stitch. What's wrong with me?????

Jeez, this sounds incredibly un-fun! Best of luck, the grafting turned out better than I could have done, and I bet it will look so beautiful when done!