As you might expect, I have been combing the internet, my shelf of knitting books, and the local bookstores, looking for a pattern for my friend's wedding shawl. I did consider designing one myself--for about a second and a half. Since I've never even tried this sort of project, and it's important to me that it not turn out looking like something the cat shredded up, I'm pretty convinced that using a published pattern is the way to go.

I have the list down to a few contenders. I have been careful to keep in mind my inexperience, and the fact that I have other things to do over the course of the next several months besides work on this project. Many of the truly stunning patterns I have found are so complex that they would consume hundreds of hours--and then only be appreciated by other knitters, which my friend is not. So I am going for effect, rather than a display of technical prowess. With that in mind, the contenders are (in no particular order):

Icarus, from the Summer 2006 Interweave Knits

and last, but not least,

Wing O' the Moth, from Knitspot

I do not want to bias you by telling you which way I am leaning. I would, however, appreciate your honest thoughts on the subject. If you were the bride, which one would you most like to receive? If you were knitting it, which one would you most like to knit (and why)? If you have any other suggestions, I'd be delighted to hear them. I figure I can take my time deciding (which, for me, means about 24 hours, since I'm a little obsessive when I get an idea).

Thanks for the help. I'll let you know my decision when I make it.

And now, the progress on Sparkly: 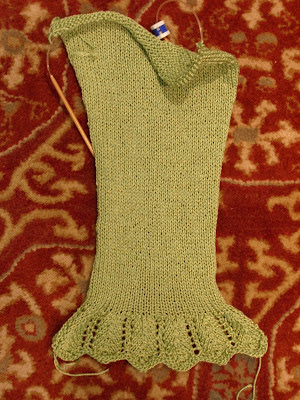 The fronts are done. The back is done. The first sleeve is almost done, as you can see. In its unblocked state, it is an unruly little minx, but it should block out fine. I have only one tiny qualm about it: I have already knitted 20 more rows than the pattern calls for, and this sleeve is still not as long as the measurements call for. Now, this could just be a matter of row gauge, I admit. But, oddly enough, the lace sections knitted up exactly to measure. It is only the stockinette sections that seem to be completely off. I noticed this, and blithely ignored it, while I was knitting the (all stockinette) back. I matched the rows counts and increases/decreases to the fronts, and came out with a finished piece that was noticeably different, size-wise. I am still going with "it'll block out" for the time being. But on the sleeves, there is no amount of blocking that's going to make them fit my freakishly long arms without adding rows. So I have. But I'm still concerned. See--this is why I write my own patterns. This uncertainty is disturbing. At least when I write my own, I expect to have to make corrections and reknit.

At this point, I'm thinking that either the back will remain too short after blocking, in which case I will have to reknit and lengthen it, or the sleeves will end up way too long, and I will have to reknit and shorten them. Either way, there is frogging in my future, and I'm not that thrilled about it. It won't be long now, though. A couple more days and I should have a finished Sparkly to show off.
Posted by Yarnhog at 1:58 PM

Tough decision. I think I like Icarus the best but Wing 'O The Moth is gorgeous! Some help I am.....

Icarus! It's not an overwhelming lace pattern, just beautiful columns that spread out into an elegant lace. My pick over all.

Rosebud was the patern I knit for my friend. Not too difficult and was beautiful when completed. Second choice is Icarus. I also have knit the pattern and it is lovely.

The Sparky sleeve is is very strking. I like the lace effect on the bottom of the sleeve. Have you used a knit gauge to see if you are knitting tighter that the pattern calls for? If the gauge is different, then you an calculate the new number of rows.

Looking forward to the finished project.

I have no idea of difficulty. If I were getting married, I'd want Icaraus. I might be biased because of the pose, but I have to think I'd feel like a magic fairy princess.