Since finishing Wisteria a few days ago--bringing my finished-but-unblogged sweater total to four, I believe--I have been without a sweater on the needles. Installing the zipper on the Aran Cardigan distracted me for a while, and I do still need to do something about the pockets, but I was starting to get an annoying little twitch in my left eyelid, and every time I sat down on the sofa, my hands would start air knitting all by themselves. In the interests of my own mental health, I had to find something to cast on.

Despite the many, many patterns in my Rav queue--not to mention the many, many other patterns saved on my computer, and the large box of patterns awaiting my attention in the stash closet--I couldn't find anything that made me want to cast on. What I really wanted was a plain, top-down raglan turtleneck in an interesting yarn. I have a couple of lots of Noro in the stash, but I didn't feel like stripes. I have a bunch of solids, too, but I didn't feel like solids. What I felt like was this: 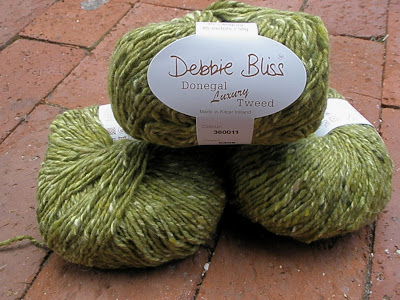 This, as you can see, is Debbie Bliss Donegal Luxury Tweed, which is the same donegal tweed as Takhi and Kilcarra (they're all from the same mill, I believe) but with the addition of a bit of angora to soften it. I bought it quite recently, on clearance from an online store in the UK, and it's been calling my name ever since. I planned to use it for another aran sweater, but I'm just not feeling the love. I don't want to work with it; I just want to play with it.

So top-down raglan turtleneck it is. I figure, I can probably get it done in time to wear it at least a couple of times before the endless summer rears its ugly head again and I have to put all the sweaters away for another six or seven or eight months.

Of course, being me, I couldn't let it go at that. As much as I love knitting plain stockinette--and I say with no sarcasm at all that I love plain stockinette--I was concerned that an entire one piece sweater all in plain stockinette in the round might just get a little...boring. Maybe a nice cable down the front would help. Something a little different. Something bold, that wouldn't get lost in the textured, tweedy yarn. Like the one from Norah Gaughan's Cire Perdue (from Norah Gaughan volume 3). I am fascinated by this cable. I am not, however, fascinated by the background of reverse stockinette, which I don't much like under the best of circumstances. And frankly, the idea of purling an entire sweater in the round makes me a little twitchy. So I just borrowed the cable design and put it into my stockinette sweater as a panel, right down the front. See? 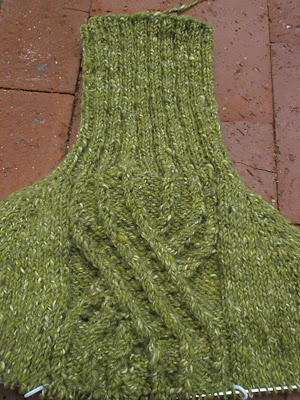 I'm really enjoying knitting this. The yarn is both soft and tweedy, the color makes me think of every growing plant I've ever seen, and the cable is dramatic and distinctive without being heavy. I think I have the sizing right and my raglan increases properly spaced, but I won't know for certain until I divide for the sleeves and can put the thing on a piece of scrap yarn and try it on. But that's part of the charm of knitting without a net, isn't it? If I'm wrong, I can always rip it out and try again. Heaven knows, I'm an expert at that.
Posted by Yarnhog at 10:44 AM

that is lovely- debbie bliss makes such smooshy great yarn. Hey look- it's also the color of a frog.

Another winner, fer sher. And I can't see that yarn without hearing my kids' Irish step mom pronouncing it 'Donny-gall' (wheras I always thought it was 'Don-uh-gul').

I am bound to like this when complete as the colour is right up my street. That travelling stitches panel looks good.

Um...about purling the entire sweater in the round...aka reverse stockinette....You could knit it inside out, knitting on the "far side" of the circular needle.

I am with you on the reverse stockinette -- I hated when that was the fashion, even though I was not knitting sweaters at the time. Yours is perfect: yummy yarn, gorgeous semi-springlike color, interesting cable to knit. I love it!

Love the color, and ripping is always good if it doesn't work! Nothing wrong with a good rip session! (Frogging a sweater the color of a frog...)

Oh that yarn is beautiful and I love the cable! Good call. Can't wait to see it (and the other finished/unblogged sweaters)!

I love the tweedy green. Beautiful cable as well. Yet again I am in complete awe of how fast and beautiful your knits are!

Sigh...I'm green with envy...both with the yarn and with how fast you knit! It looks really pretty.

That luxury aran is such yummy yarn. I pet it everytime I go to the yarn store near my office. And the sweaterin progress: lurve it! The color is awesome.
Lookign forward to the parade of 4 completed sweaters too.

you must be the sweater-knitting-est person i know. do you have a whole closet full yet? LOVE the look of this yarn. LOVE it! can't wait to see this finished.

I love that color! And I really really want to see Wisteria. Please?

You are a knitting goddess, no doubt about it. I can't even THINK about knitting as much and as fast as you - the very idea makes my brain twitch. Sigh. Maybe someday I, too, will finish a sweater. (Yeah, right...as soon as I finish that cover-model gig for Vogue.) Knit on!

Oh, that is pretty! The cable and the yarn work perfectly together.