Although the last round went to the KG and her supreme sense of irony, I still count the dyeing experience as a success: I was able to obtain the color I wanted and to duplicate it on subsequent batches. Since I have lots of yarn--a surprising amount of which is in colors I don't really like--and not a lot of money to spend on yarn, I returned to the stash for another lot to send to the dyepot.

It didn't take long to settle on this: 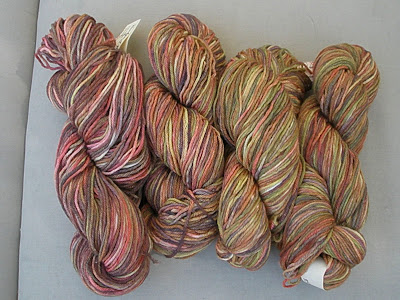 This is a lovely merino/silk blend in a dk weight. Unfortunately, as beautiful as the colors are in the skein, I have learned through hard experience that I don't at all like the way variegated yarns look knit up. In fact, the sweaters I've knitted from variegated yarns have mostly found their way to the dyepot after the fact.

To add to the problem with this yarn, the skeins don't match. Two are pretty similar, but the other two are totally different. I don't alternate skeins. It makes me crazy, and I don't need any more crazy in my life.

The vastly different colors limited my choice of possible colors for overdyeing this yarn. Almost any color I picked would result in some areas of brown because of the color combinations. So I knew I needed to choose a color that would work with some brownish variegation. And because I wanted to mostly cover the existing colors, I wanted something dark and saturated. I settled on dark plum. I love the color, it looks good on me, and I had the dyes to accomplish it. I knew going in that I would not end up with a solid color, but more of a tonal yarn, because of the underlying variegation. That's okay with me; I like tonal yarns, heathery yarns, tweed yarns...just not strongly variegated yarns. I was hoping for a variety of shades of plummy colors.

Since I knew I was going to dye all this yarn as a single batch, I didn't need to be quite as careful about measuring the dyes. I don't need to duplicate the color later. I decided to start with Vermillion (I use Jacquard acid dyes), which is already a dark red, and add some Sapphire Blue to give it a purple tone. For no reason other than that it seemed about right, I mixed four parts Vermillion with one part Blue. This made a really pretty berry color, but I wanted something darker. I added one part Jet Black, and the result looked pretty good, so I went with that. 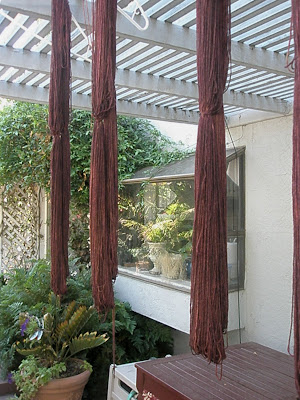 And here it is all dry: 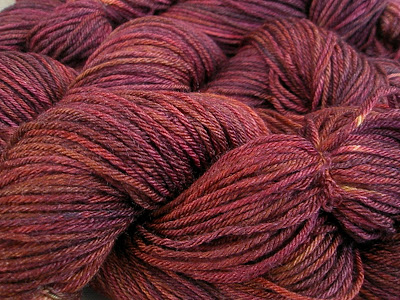 It came out mostly as I had hoped. There are some small areas that didn't really overdye, so there are spots of yellow and green and orange among the purples, but I think I can work with those. I'll either cut the yarn when I get to them, or leave them in. They're small enough sections that they may create an almost tweed effect against the more solid purple. I won't know until I knit it up. 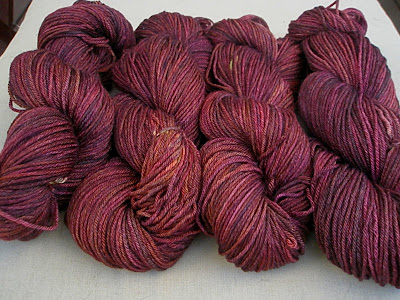 In any case, I like it much better than the original colorway, so I'm counting this one as a win. 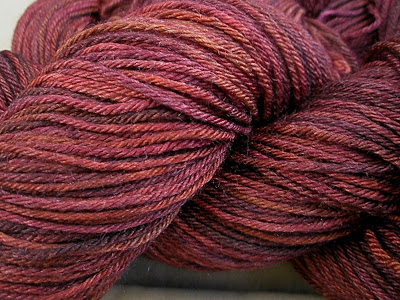 But shhh...the KG is listening!
Posted by Yarnhog at 1:40 PM

Beautiful color! I think you're really going to like this knitted up.

::whispering, so the KG cannot hear::