...after two solid days of trolling Ravelry and looking through old knitting magazines and polling the blog and still not finding a cardigan pattern that jumps out and grabs her interest?

If you're this knitter, you become utterly disgusted with knitting, knitters, yarn, patterns, the internet, and life in general. Then you open your closet and look at previous sweaters for inspiration.

And if you're this knitter, you remember that sweater you knitted four years ago and loved knitting so much you promised yourself you'd do it again. And you realize it is one of the most frequently-worn sweaters in your wardrobe, and you would really, really like another one. And then you toss the stash, find some yarn, and cast that sucker on without a backward glance. 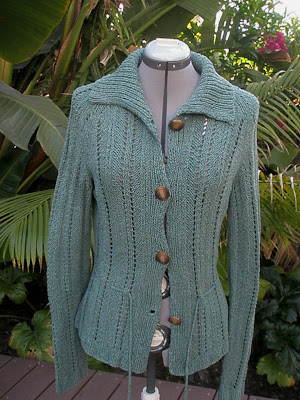 This is Ariann (from Chic Knits), which I knitted back in 2007. I had some issues with the knitting of it, exacerbated by the yarn (100% raw silk, which is a b*tch to knit), and the fact that I knitted most of it in the car on the way to and from Lake Tahoe, with two young boys and two large dogs mixing it up in the back seat the whole way. It initially did not turn out well, but after a rework a few months later, it became a favorite in my spring/summer rotation. Super easy to toss on when I'm trying to disguise the fact that I am wearing yoga pants and a t-shirt for the third straight day. I blogged it here (much better pictures).

I always wanted a second version in wool to wear in the cooler seasons. There is no way the Berroco Peruvia I've been dying to cast on was going to work, so I bit the bullet and set it aside. But I did find just the right amount of a nice, dark brown worsted weight wool in the stash, and quickly cast on the first sleeve. 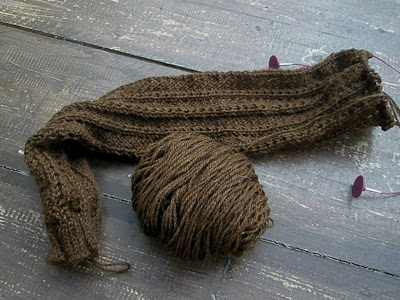 I dearly love the stitch pattern for this sweater. It's quite simple and easily memorized and I can knit it almost as fast as stockinette, even while watching tv, but it's much more interesting to work. 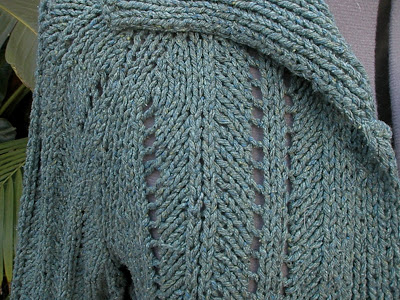 I can hear several of you exclaiming, "But it's lace! Yarnhog hates knitting lace! Lace is the bane of her knitting existence! How is this possible?" My friends, I have no idea. Ariann seems to be the one exception to the Lace Curse. I don't know why it doesn't cause me to break out in boils and spew pea soup while my head spins 360 degrees, but it doesn't. Let's just keep this quiet, shall we? I'd rather the Knitting Goddess not get wind of it.

The second sleeve is on the needles now, and then I'll get to work on the body. One of the great things about this pattern is that, while it is bottom up rather than my preferred top-down, the body is knitted in one piece, the sleeves are then attached to the body, and the yoke is worked all in one piece from there, meaning there are only two tiny seams to sew under the arms when it's done. Love that!

I'm still on the lookout for my Perfect Cardigan for this year, and the opportunity to use my Peruvia, but for the time being Ariann is taking the edge off.
Posted by Yarnhog at 9:37 AM

Congrats on rediscovering this pattern.

As always I am looking forward to seeing another finished off of yours. I have missed all your hilarious blogs!!

Lovely pattern for sure ... but have you seen the EZ "green sweater" that was recently discovered and a pattern written ? or the green sweater in the new book which is an incredible design and interesting knit ... "book = Knit One Knit All"

I guess you have found your perfect sweater. Sometimes the thing you are searching for is right in front of you. I like that yarn color.