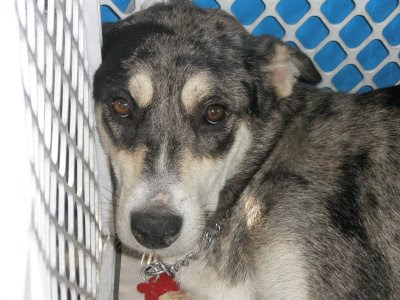 Heidi Before
Last year, around this time, we impulsively decided to take in a mother dog and her litter of puppies who were about to be put down at a horrible pound a couple hundred miles away. All of them were terribly ill and half-starved, thanks to the abuse they suffered at this so-called "shelter". Two of the eleven puppies died before they even reached us, and a third died within the first twelve hours, despite our best efforts to save her. After two months of care and attention, we were able to adopt out the remaining eight, healthy, happy puppies to wonderful families who were delighted to have them. Mama had a longer road to walk, as she was weak and ill from both the abuse and from pregnancy and nursing. She stayed with us until she was well enough to be spayed, and then stayed with us until she recovered from the surgery...and then she just stayed with us. We named her Heidi, and in the past year she has become an indispensable part of our pack. We love her dearly and are incredibly happy she came into our lives. But there are thousands of great dogs being put down every day, simply because no one wants them. If you own a dog, please make sure it is spayed or neutered. And if you've ever considered adopting a dog from a shelter or a rescue organization, we want you to know that some of the best dogs in the world are just waiting for people to take them home. 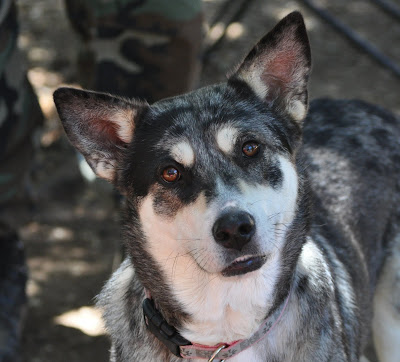 Heidi After
Posted by Yarnhog at 12:35 PM

If it wasn't for the markings I am not sure I'd believe you.

She looks great, thanks to your help. I followed the story last year and loved the pictures and happy endings. Good to see Heidi has been happy with your family.

What a beautiful girl. :) And she's so very lucky to have you.

It still makes a lump in my throat when I remember what she and her pups went through. And now - just looking at that bright face says so much.

Heidi is a luckly, lovely, loved girl. Hugs to you and your family.

I remember her story, I followed it every day. She sure is a beautiful gal. Heidi sure has come a long, long way. In that first picture you can almost feel her fear and confusion, but in the second picture she KNOWS that she is loved, there's even a smile on her face!

And thank you for allowing us to be a virtual part of hers, and your, life!

I remember when you took her in. She looks so healthy and lively now.

We have a Bouvier, Molly, also a rescue and our life is brighter because of her.

Ok, where is your love button?? (Seriously, what a transformation in the ear attitude alone!)

Oh Suzanne, Heidi's sweet dog face before & after is amazing. Such a tranformation. What a difference love makes. It brought tears to my eyes.

I second your motion. Shelter dogs need a home. It's all we have ever had; shelter cats, too. Heidi is lucky you found her. She is beautiful now, thanks to you.

I have a rescued stray, too. Her name is Zuzu. She looked like Heidi when I found her at the shelter. She is a happy girl now...and we are so lucky to have her.

My mom lives in the country. People dump dogs like garbage. She would take them all in if she could. When she is maxed out she takes them to Stonecliffe Animal Rescue. Mom always has a motley crew of canines...and we love em' all.