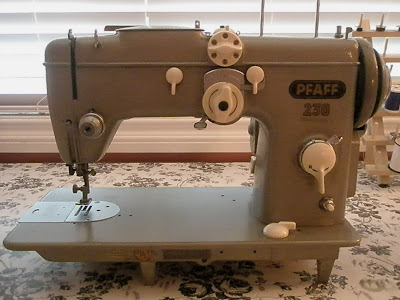 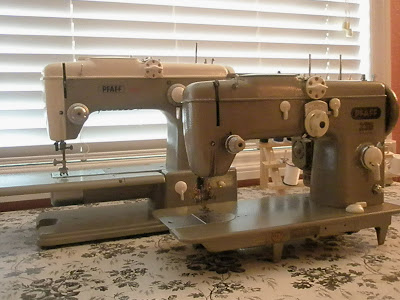 They are very similar machines. They have almost all the same functions, except that the 230 is a flat bed machine, while the 360 has a free arm. The 230 has a more powerful motor and can run much faster. It sews beautifully, now that I've fully cleaned and oiled it, taken apart and cleaned the motor, and bought a new foot pedal and cords for it. I got this one for $25 off craigslist, complete with cabinet, accessories, and all sorts of sewing bits. 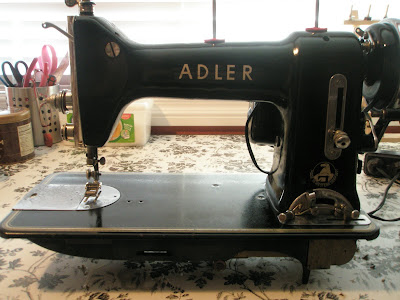 And this is another recent find--also $25 on craigslist. It is an Adler 187, which is another German machine, this one from somewhere between 1950 and 1952, which is the only time these machines were ever made. Apparently, Adler then switched to making only industrial machines. There are very few of these around. I have found exactly one online. I have read several opinions about these machines, though, claiming that they are even superior to the older Pfaffs that I love so much. Time will tell, I suppose. 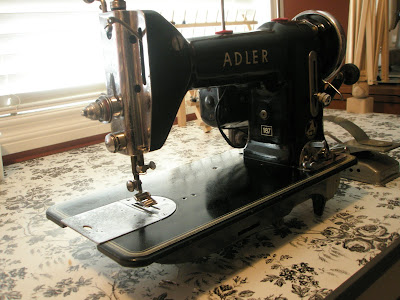 This machine was in pretty rough shape. It had been stored in a damp shed for several years. It was in a cabinet that was cool-looking but very rickety--so rickety that when I tried to get it out of my car, it crumbled into a dozen pieces! Fortunately, I had the presence of mind to hang onto the piece holding the sewing machine. Dropping it would have been bad for both my foot and the machine. Once I extricated the machines from the remains of the cabinet, I carried it up to my workroom and started cleaning.

Every shiny metal bit was caked with rust. It was so bad that I bypassed my usual cleaning methods and sprayed the metal pieces with Lime Away. It worked like a charm. The rust just melted away. Here is a picture of the worst of the three bobbins before: 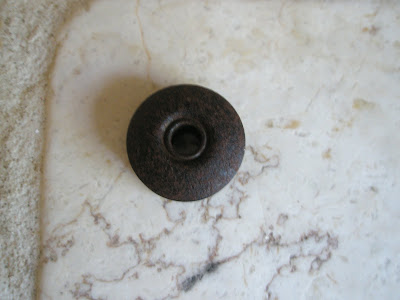 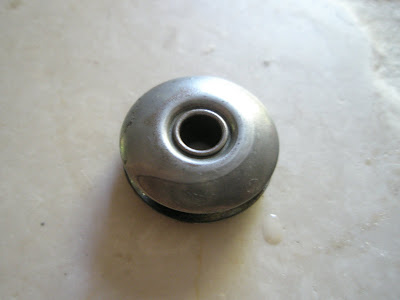 Unfortunately, the metal was pitted underneath the rust, and there's nothing I can do about that. I just wiped it with a little sewing machine oil and polished it up. 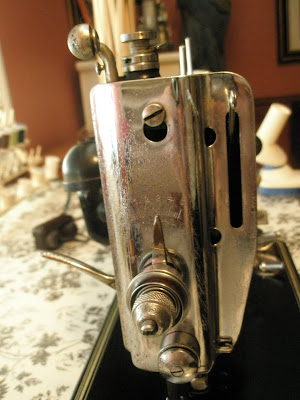 This is the only machine I have with the tensioning unit on the faceplate. I don't have a manual yet (and have been unsuccessful in locating one so far), so I'm not sure how to thread it. 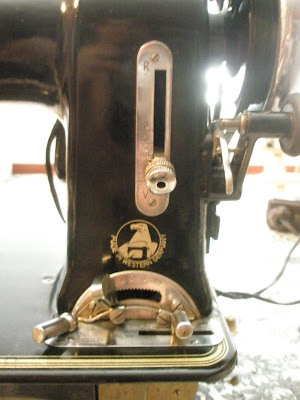 If you look really closely, you can see that the labels on the feed dog lever (at the bottom in this pic), are in German: "nahen"--sew--for up, and "stopfen"--darn--for down. I love that.

Not sure whether I should admit this, actually, but these two bring the total number of sewing machines in my workroom to nine.

Maybe I should sew something.
Posted by Yarnhog at 5:08 PM

Okay, I am going to Craigslist RIGHT NOW to see what is available in the Twin Cities.

OK, time to get sewing!

Your Adler reminds me of my Singer. I love the hum of this old machine. $25 bucks for yours is a deal!

Where are you putting all of them?

Do please nähen with the Adler!

(snicker snicker heee hee heeeee) you might have to change your blog identity name if you keep this up...

Congratulations on the new acquisitions!

Cool! How many do you have now?

Wow, those are some gorgeous machines!

Has your family staged the intervention yet? :)

I saw a couple of vintage sewing machines at a consignment store here in Encinitas. Just in case you want to round up to an even number. :)

I have a few very expensive good-quality sewing machines, and I can't remember when I last used one!

I reached your blog through Ravelry. I'm also collect sewing machines. My absolute favorite is my Singer Featherweight -- I use it more than my Pfaff or Bernina! Love your blog.

I thought I had only one machine- my new Janome- but then I started counting...there's anold electric up in the attic, I can't get it to run properly. Then there's an old Singer in a table, a threadle machine. Haven't done anything with it, it's just for decoration sofar...andthen I got another Singer, with a handle you have to turn. Sits in the windowsill in the hall. Hubby had no objections, in fact, he's the one who dragged the two Singers into the house;-)

Maybe you can help. I also have an Adler 187 and took it in to be repaired. After getting the bobbin door open there was no bobbin mechanism or bobbin. Perhaps you have a part number or some advice on getting the missing pieces?

I have a Adler 187 I picked up at our local desert industries. It's in perfect condition, works and looks perfect! It has the sewing tin with all of the attachments, a German written instruction booklet and best of all the original Adler built cabinet complete with a self storing seat and thigh peddle instead of the foot peddle. I'm so afraid.to use it although it works amazingly well...i mostly upholster and wondered if getting parts for this peach would be hard....or should I sell it to someone who can appreciate it more?

I just bought a PFAFF at a yard sale today. I can't seem to figure out the cords. There is a two-prong white cord and a female three prong black cord. Could you add a pic of the cords running from your machine to where they end up? That would be super fabulous!

ADLER SEWING MACHINE IS NEW BRAND TO ME, SINCE I HAVE A BERNINA EMBROIDERY, BROTHER EMBROIDERY, BROTHER SEWING, SINGER FEATHERWEIGHT 221,VINTAGE SINGER WITH PEDAL,AND NOW I FOUND ON CRIG LIST AN BEAUTIFUL ADLER 187 WITH CABINET, SIT AND STORAGE UNDER IT. THE SEWING MACHINE IS IN INMACULATE SHAPE AND COLOR AND IT HAS BOBBINS, ATTACHMENTS, AND CERTIFICATE OF AUTENTICITY FROM 1952. I PAID $100 FOR IT. IT HAS MANUALS (ORIGINAL AND COPY) I CAN SHARE THE MANUAL WITH SOMEBODY THAT NEED IT, I HAD TROUBLE THREADING BUT FINALLY I DID IT. THIS IS BEAUTIFUL AND I OWN ALREADY 6 SEWING MACHINES (3 ACTUAL, AND 3 VINTAGE) I LOVE SEWING MACHINES, SO I HAVE THOSE JUST TO PLAY WITH.

I just bought an old Adler Sewing machine. The only writing on it is Adler, 52, and made in germany. It works although I have not tried to thread it yet. I paid $20.00 for it in a thrift store.

Hey I just bought this same exact machine in a table for 20$ at a yard sale! It came with the accessory box full of all the feet, and a dozen bobbins! I'm excited to clean it up and restore the table too.
Did you have any luck yet on locating a manual? Also, do you know how much these are worth?
Email me! Ali.volleyball@gmail.com

Hi! I too have acquired a 187 Adler! I'm having a hard time finding any info on this machine, manual, and value. If you find out any of the above you can please shoot me a message? Thanks!!
Klthomas5477@gmail.com