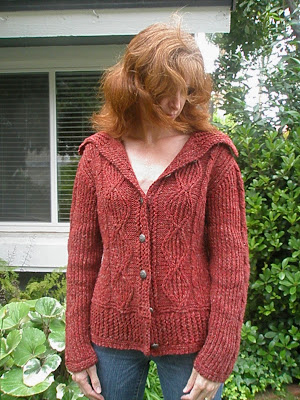 It's been a while since I put up an FO post for an actual knitted object, so I'm happy to present Spicy Tweed! 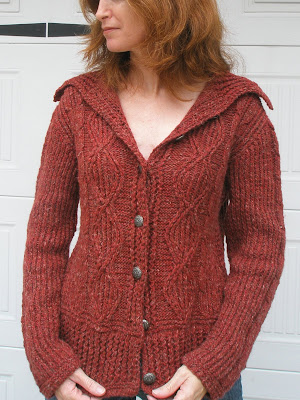 This was my WIP Cup project, and I finished with five days to spare, even though it took me two days to get around to sewing on the buttons.

Pattern: Tweedy Aran Cardigan by Norah Gaughan. Great pattern, as usual with Norah, but be aware there are thousands and thousands of twisted stitches, so if ptbl drives you bonkers, you might want to think twice.

Yarn: Harrisville Wool and Flax. This is an odd yarn. I'm still not sure whether I like it. It is composed of two softly twisted, woolen spun plies. It splits easily, which is a pain when working so many cables and twisted stitches. There is also a remarkable amount of scratchy vegetable matter in this yarn--more than Noro by quite a bit. The only yarn I've ever seen so much vm in is the "barn yarn" I used for the KH's On The Road sweater, and that was half price due to the amount of vm. The yarn is light and lofty, but not particularly soft, even after washing. And it grew like crazy with washing. It doesn't seem inclined to pill, though, which is a big plus in my book, and it's very warm. Time will tell whether this one gets a thumbs up.

Needles: Knit Picks Options circs, sizes 6 and 7. I very carefully swatched, measured, washed, and measured again, settling on sizes 5 and 6 to give me just the right size. And after I had finished the back and began the cast on for the first front, I realized I had mistakenly used size 6 and 7 needles. Ripping was out of the question, so I accepted that I would have an oversized cardigan. Which it is. Very oversized. I think it's about 40" in the bust, where I am about 35" in the bust. Not my best fitting sweater, but comfy, nonetheless. 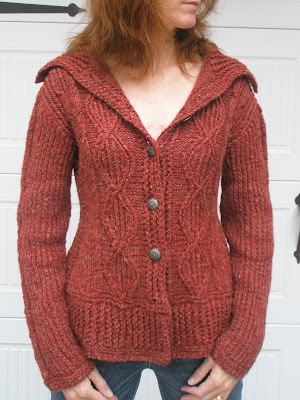 Thoughts: I didn't really enjoy knitting this. I am at a loss to explain why. I was really looking forward to it; I was excited about both the yarn and the pattern, which were well matched; it was interesting without being too difficult--but still, every time I picked it up, I lost interest within a few minutes. That's why I decided to do it for the WIP Cup. Even now, with it done, I'm only lukewarm about it. 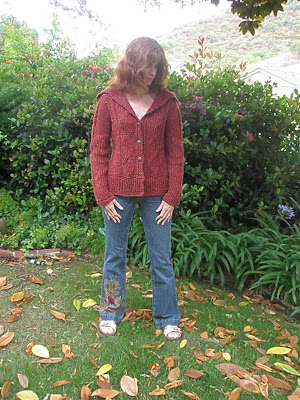 At least the weather cooperated for my FOto shoot. It's about 65 degrees here and overcast; It looks and feels a whole lot more like fall than summer!
Posted by Yarnhog at 3:24 PM

beautiful! cooler weather than we have here (95)!

I think it is beautiful!

I love that sweater. It actually looks better a bit oversized; it is a great, cozy, fall, wear-with-jeans sweater. Despite all your caveats, seeing it made me want it on top of my to-do list. I have some Harrisville Highland that I have put away just recently to make this, so you're very inspiring.

I love anything Harrisville. Their Highland is my desert-island yarn. Vegetable matter is good; that means fewer chemicals during processing.

Become one with the vegetable matter.

I've followed your blog of and on for a couple of years, and I don't think I've ever left a comment to tell you how lovely I think your knitting is. This one is gorgeous!

It's a great color and I love the stitch pattern. Hope it grows on you and you'll want to wear it when the weather is chilly/damp.

That gardi is just beautiful. And the colour is amazing. Just love that colour. I've had that same pattern on my "to do"-list for ages now (I have some Lanark for it in my stash) but somehow I end up postponing the actual knitting of it. I hate twisted stitches (they look good but are pain in the arse to knit) and to read your comments about the actual knitting process... well - I don't know - it looks so nice but could I bare to knit it is another thing entirely (I get easily bored while knitting)
Still - maybe the end result would be worth it? At least your gardi is just perfect!

It does look like the yarn is very suited to the pattern! I hope you grow to love it more each time you wear it! It certainly is beautiful!

I think it looks gorgeous!

Looks great but looking at a wool sweater today makes me feel even hotter! And that spicy color? Only adds more heat. Bet it will be great come winter.

Looks gorgeous! You say you don't like the fit; I think the cardigan fits you perfectly (judging by the photos; you of course know best). The pattern is beautiful, but your mention of thousands of twisted stitches made me shutter: this pattern shall never make it into my queue! (Brave woman to deal with that many ptbl.)

Beautiful sweater, and it looks like it fits you well (just so you know). Re: splitty yarn. I have found that blunt needles like Addi Turbos work better at avoiding splitting the yarn; KP Options are quite pointed and are slowly falling out of favor with me because of those points. But having said all that, I must say that blunt needles might not have worked so well with the twisted stitches.

It looks fantastic! Sorry you're only lukewarm about it. Maybe after time passes, you'll grow fonder of it.

It looks great. Hopefully the coziness and good looks will overcome your "meh" feelings about the making of it. Or you could gift it to someone who may not find it as over-sized...