Biting Off More Than I Can Chew 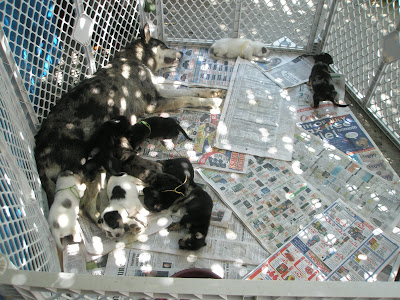 ...only worse. This mama dog and her new puppies were in a "shelter" in San Bernardino (about three hours from San Diego). Mama and puppies missed being euthanized by about an hour, after a rescuer in San Bernardino called a rescuer in San Diego pleading for help finding a foster home...and I happened to click on the "pets" link on craigslist a few minutes later. I offered to take them, and a rescuer from San Diego drove up to San Bernardino yesterday and brought the dogs back. We met at the home of the rescue coordinator and did the hand off last night.

Apparently, the shelter didn't think any of them were worth saving, so they didn't bother feeding the mother, who is now severely emaciated and doesn't have enough milk for her pups. Mama and all the puppies have a severe case of worms. Two puppies died in the shelter, and one more probably won't make it through today. I'm bottle feeding (actually dropper feeding) the nine currently-surviving puppies, and I've become expert at administering medication to squirmy, uncooperative puppies (with nine puppies, expertise comes quickly). 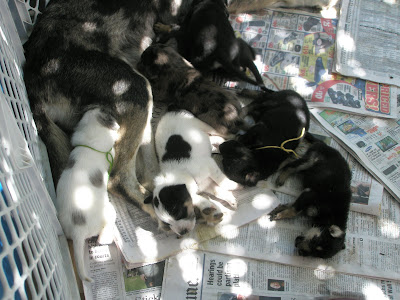 We think the pups are two weeks old, so they've got six weeks before they'll be available for adoption, assuming any of them survive. Eight of them seem to be doing pretty well. If anyone has any connection to the Higher Powers, could you please put in a good word for these babies and their mama? They've had a rough start and could use a little help.

Oh, and send newspapers. Lots of newspapers.
Posted by Yarnhog at 9:11 PM

How could they not feed them? That is cruel and unusual. Good for you for saving them; your halo just got a little brighter.

Oh, the cuties! I can't believe they weren't fed, that's really awful -- the poor things must be pretty traumatized. :( Kudos to you for taking them.

A wonderful thing you did! I hope the puppies make it. They all look adorable.

Not feeding them? What makes that sound like a good idea? Oh, we're going to euthanize this dog anyway so it's okay if we abuse her....
You're awesome for taking them in. There's nothing cuter than a puppy! More pictures please!

Bless you and your big huge loving heart! I cannot believe that "the shelter didn't think any of them were worth saving" how can they live with themselves?!?!?!?! OMGoodness.
I will be praying up a storm for all those sweet puppies! I hope that they find loving forever homes...

Oh no. I can't imagine the "shelter" making them suffer that way. Bless you for offering them a home. What a generous heart you have. My daughter's dog, Maggie, came from a foster home. The mother dog died at the shelter when the puppies were born. Fortunately, there was someone like you who was willing to take the puppies to her home and care for Maggie and her siblings.

My brain just locked up. It can't process the concept of "didn't bother feeding the mother."

Well done taking them on.

Oh my!! You are truly a saint. I hope the pups make it. They are very cute.

Thank you for saving the puppies and their mom. I hope it isn't too much work for you. You've done a truly kind thing.

This is horrible! I recently bottlefed a rescue who's mama didn't make it (horrible neglect story) and decided to try this recipe for replacement milk. It is a total miracle formula - I HEARTILY recommend it for puppies like what you have:

1. 10 oz. of canned evaporated milk or goat's milk (not pasteurized cow's milk - this will cause scowers - dogs cannot drink normal cow's milk) Goats milk is by far the best to use. Wall Mart sells it.

2. 3 oz. sterilized water (baby water or boiled water) this is not needed if using goat's milk

4. 1 cup of whole yogurt (avoid skim or fat free if at all possible)

Seriously - this is SO much better than the commercial stuff, AND cheaper. My vet saw what it did and she had us print it out for situations like this for others in the future.

Oh so many good thoughts on the way. Hooray for you my new dog-saving friend.

Okay, I have a headache from holding back the lightning I want to call down on those people!! How can people be so horrible? Bless you for taking on this task. For mama dog, something that may help is yogurt with live cultures. Helps balance out the digestive system so more of the nourishment she takes in, stays in. My gosh the puppies are adorable!! You do realize you're going to wind up with at least one more dog, right? :-)

I hope mother & babies pull through. I admire your compassion and generosity more than words can say. Your place in heaven is now secured.

I want a puppy.
And yeah, you've bitten off a pretty big mouthful. Good thing someone did.

Okay, this is when I wish I ruled the world, because, the darn animal control people would be left to starve to death. Damnit. People are so freaking mean. Thank God for you and your family for taking in the poor momma and babies!