Yarn on the Hoof

The boys enjoyed feeding these guys dried leaves, which the goats munched down like potato chips. 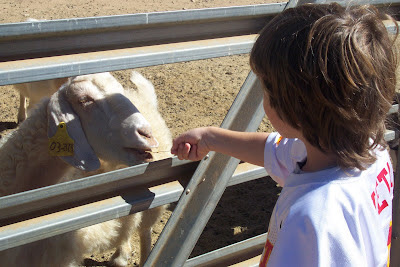 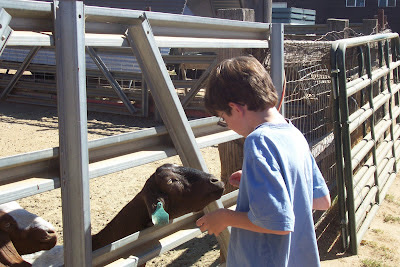 I did wonder aloud what you get from this type of goat, since they're clearly not cashmere or angora goats, and I don't think the males give milk. The owner set me straight. Shhh. They don't know they're "meat goats." 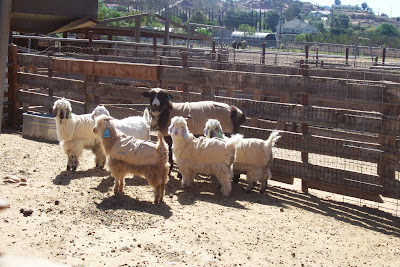 Now, these are clearly wool sheep. You can tell by the neat coats that protect their fleece from dust, leaves, and, well, poo. Apparently, the coats keep them much cleaner than sheep without coats. They certainly appeared clean and well-cared-for. But they must have heard about the "meat goats," because they looked decidedly suspicious and wouldn't come any closer than this.

As for me, I proved once again that I am helplessly wanton in the face of beautiful fiber, even in the presence of witnesses. 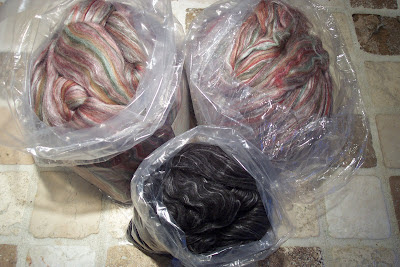 That's a sweater's worth of merino/silk, which I've had my eye on for a while, plus a shawl's worth of alpaca/silk, which the owner of the farm shamelessly induced me to buy through the simple and expedient tactic of opening the bag and inviting me to touch the fiber. I've felt butter that's scratchier than this fiber. The only question then was whether I should buy all she had, cackling madly and repeating hoarsely "Mine, all mine!" or perhaps exercise a little self-restraint and keep the total bill down to a merely hair-raising amount, instead of an amount that would cause my very-tolerant (but still fiber-resistant) husband to balk, or make pointed comments about the difference between income and outgo. I held myself to a mere eight ounces, which, if I can master spinning lighter weight yarn, should be enough for a lovely shawl (Icarus? Who's Icarus? La, la, la--I can't hear you!). The picture does not even come close to doing justice to the exquisite colors and sheen of these fibers. I am almost afraid to attempt spinning them, for fear I'll make a hopeless mess of such artistry. But since I can hear them singing to me when I'm looking the other direction, I probably won't be able to hold out long.

Icarus Countdown: Stalled. Friday arrived as expected. My yarn, alas, did not. UPS assures me it will be delivered Monday. I'm trying to ignore the film of sweat behind my knees as my deadline looms ever nearer...
Posted by Yarnhog at 5:29 PM

Merino/silk and alpaca/silk!?!? I don't think I would have to strength to leave any of that behind.
I really love the sheep with the little coats, it's like they are out there caring for our yarn before it's even yarn.

Ooh, I love the sheep in their little coats!

I believe you showed great restraint. I'll know where my mutton came from if it has a crunchy potato chippy leafy taste. sounds like great fun.

oooh! I was getting caught up on your archives and notice that you TOO, had an "almost-to-the-end-is-there-enough-left" moment! I thought it was just Clumsy Me and my equally-math-challenged Daughter who did that sort of thing. And we're the acrylic-Grandma's-favorite-shawl types, not (yet?) the Icarus types. (I am in awe). And I used to call wild bears "meat bears" to differentiate them from teddy bears!

"Friday arrived.. My yarn did not." how poetic! That's going to be some fantastic yarn- I'm psyched to see how it spins up.

That fibre looks so yummy! I'm glad you didn't resist. It would have been lonely without you.

My basement is yours, should you want it. However, if it's TO (Toronto) you want, it's a bit of a drive...

I succumbed to a Jacob fleece yesterday. "Shameless" is about how I felt.

Try as I might I cannot envision myself eating goat. I cannot even eat their cheese or drink their milk. I just don't have it in me. Lamb, yes. Goat? Not so much.

I've never eaten goat! That kinda surprises me. Sorry to hear about the non-delivery of your Icarus yarn. That lovely new fiber should be able to console you.

This is why I refuse to engage any further in the fiber arts. Knitting leads to spinning and dying and weaving and before you can say fiber addiction I'll be living in my son's tree house to make room for all the fiber. I wouldn't have been able to resist either.

When Edith Piaf was asked why she kint, her response was "It keeps me off heroin."

The fiber is gorgeous!!!

I have 3 balls of merino silk that I sometimes just open my fiber closet and pet. Silky, beautiful sheen, soft, you name it....

The colors you got are awesome. Can't wait to see the finished product.

Oh that looks yummy...(slurp) Can't wait to see what it turns into! I'm not sure I'd be able to do anything with it other than place it beside my bed and stroke it lovingly now and then. I think it's probably a very good thing that I don't know how to spin (although I'm very open to learning!).

Those are going to spin up beautifully! So shiny...

I do believe most of the sheep in coats are goats in coats. (tails up = goats)
They sure are fuzzy critters though.

So much wonderful fiber you've got there!

ps. Your shawl is gorgeous.