One thing about being trapped in the house for days on end, watching fires burning all around on the news and waiting to evacuate--you have lots of time on your hands and lots of nervous energy to use up.

You'll have to excuse the quality of these pictures. With the smoke in the air, outside pictures are impossible. 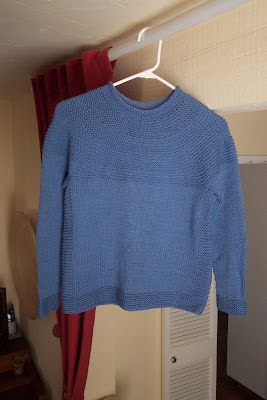 This is Cobblestone (sort of), by Jared of Brooklyn Tweed, from the Fall 2007 Interweave Knits. I couldn't actually use his pattern, since it is only sized for men and this is for my skinny ten-year old, and since I used dk weight yarn instead of worsted weight. I did follow his basic design, though. 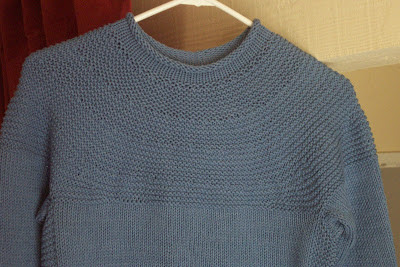 My son loves this sweater. He thinks it looks like chain mail. I'm am very "eh" about it. For one thing, I really don't like one of the design features I did include from the original pattern, short rows at the bottom of the yoke. I've never done a yoke style sweater before and thought there must be some reason for them, so I put them in. I suspect the reason may be to accommodate men's wider shoulders. But since my ten-year-old is built like a stick figure, the result is more of a puffy-sleeved look. If I had it to do over, I would definitely leave out those short rows. The other thing I don't care for is the way the increase rows are done. On a raglan style sweater, the increases are all done along the raglan, which creates a single, angled line of decreases. In this style, the decrease rounds happen every few inches, as an entire round of k1, k2tog, which creates noticeable lumps in those rounds (see the above picture). This is exacerbated by the smooth, cotton yarn I used, and I really don't like it. My son does, though, and that's what counts. 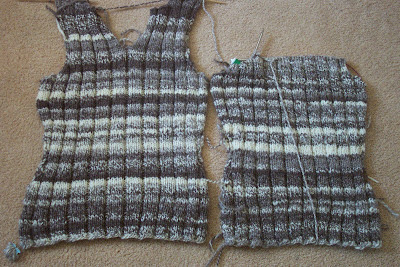 This is the progress on My First Handspun Sweater. (This is what I've been working on while watching the fires for the past two days. You see what I mean about nervous energy.) I spun this yarn from three different shades of undyed BFL, which I spun and plied alternately to create what I hoped would be randomly sized heathered stripes. I think it worked pretty well. I am especially proud of how well-matched the colors are on the front and back--no thanks to my spinning, but rather to careful cutting and color changing on the back to match the front. I could not exorcise my compulsive demons long enough to let the colors happen naturally. Any guesses as to how many ends I'm going to have to weave in on the back? 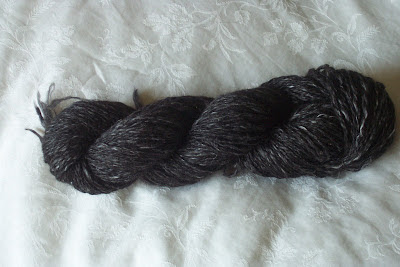 This is my current new love: 680 yards of alpaca/silk in about a fingering to sport weight, which I spun myself! I was going for lace weight, but apparently my spinning skills were not up to the task. The plan is to make a shawl for myself to wear to my friend's wedding--the wedding of Icarus notoriety. I am a bridesmaid, and a little embarrassed about it. Don't get me wrong: I am absolutely honored to stand up for my friend at this very important moment in her life. But at 38, with two kids of my own, I feel a little silly carrying flowers and trying to look virginal. Maybe they could rename the office. I don't think I would feel nearly as silly if they called us "the honorguard" or "support staff" or "moral support" or something. I probably need a bit more yarn than this for a shawl, but I still have plenty of fiber left, so that won't be a problem. At the moment, though, my spinning wheel is packed in the car, along with the "good" yarn from the stash and all of our other essential and prized possessions. Yes, people, I am evacuating my yarn. I'm sure none of you have a problem with that.
Posted by Yarnhog at 10:13 AM

YOur handspun looks great!!! I am glad that you have had the time and energy to work with your wheel. I love mine and have been spinning wool for a jacket for my Mom. Glad to hear that the fires are still staying away from you.

No problems with evacuating the yarn as long as there is still room for those pesky children :–)

Well done on the hand spun. It looks like a very even pattern of colour change.

Any idea when you will evacuate? You are giving me a heart attack with worry. As always I hope you and your family are safe and stay that way. I also hope your home stays untouched. I know everyone says that as long as family is safe nothing else matters, but we all know that there is still the fear and worry over our homes—always. They really are an important part of any family.

I like your son's Cobblestone, esp. the color! I was also thinking of omitting the short row shaping, mainly b/c I'm lazy!

i had to look virginal and sweet at about the same age. it was...weird.

I love the handspun sweater! It's beautiful.

Of course you evacuate your yarn! I wish I'd taken my sewingmachine with me when we had to flee our house due to a fire! We lost the house, and all our belongings(and yes, that is a HUGE part of your life!!!Heirlooms and kid's projects and books and stash...)but we got out allright. I hope you'll be safe now. It's been on the news ever since the fires started.
Quite another topic: Bridesmaids...We have Best man and Best woman, the bridesmaids/grooms are cute little girls and boys all dressed up....
Nice spinning/ knitting!
Take care.

Wow! You have been busy! I love your handspun... I am duely impressed.

I'm glad to hear that you packed your yarn and the danger has lifted. I actually just logged on to e-mail you to be sure you had packed Icarus. Seriously, I was so worried about it... and you too of course.

As always- everything looks great-nice compulsive job on the striping. Maybe at 39 you could call yourself a Seargant at Arms...Bouncer... the Elder Married Lady?

i was really worried about your yarn.
we call being cooped up waiting out a natural disaster 'ice storm mode' thought fire is way more terrible than ice storm.
your handspun sweater is awesome and who knew knitting could resemble chainmail?

so glad to hear the good news about the fires...

your cobblestone looks great! i adore the fact that your son loves it!....that is really all that matters! :)

What an exhausting way to live. From your update, it Sounds like the worst is over and I hope that the evcuation notice is completely lifted so you can get back to normal life.

LOVE LOVE your handspun sweater!! I also am crazy for your Cobblestone and appreciate your critique of certain design elements. I'll avoid the short row stuff and weird increases when I make one for myself. If I had to evacuate, yarn would in the top 5 list of thing to pack.

Your handspun sweater looks awesome! I made a Noro sweater once and kept cutting the yarn to get it to mostly match too.

I think your son's sweater came out really nice too. I don't notice the sleeves being puffy. And he likes it too, so that's a big plus.

I was thinking about your stash... i would evacuate my yarn too! I'm happy though that the fires are still staying away from your house.

You have to evacuate your stash the insurance company would never believe the value. Unless you kept the receipts? Nah, that would be dangerous evidence.

I love Jared's tweaks for the Tomten Jacket. Except they are for a guy. I am not a guy. But his pics look very cool - almost like a medieval monk in hood!

Of course you had to evacuate your yarn. Was there ever any doubt? Great job on the striping on your sweater; as a fellow compulsive I can empathize completely.

wow! you've been busy. i hope when my son is ten that i will make a sweater for him that he loves. glad your little guy loves his new sweater. how cool. everything you've done is lovely. glad things are looking up in terms of the fires. hope that trend continues.