Thank you all for your good wishes and concern. My family and I are fine. Although we have been under a mandatory evacuation order since Monday morning, our neighborhood is not currently threatened, and we are all sitting tight for the time being. Many of our friends and family have not been so lucky and are waiting in evacuation centers for news about their homes. 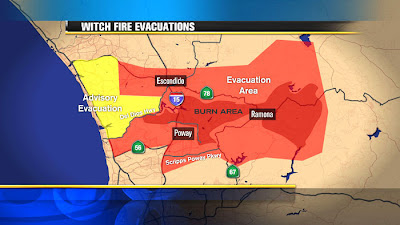 I don't know whether you can tell, but the evacuation area that I showed you yesterday was that little section west of Highway 15, north of Highway 56, and south of that yellow section on the left. As you can see, it is much larger today, covering several hundred square miles. (I live just south of the burn area, just west of Highway 15, and north of Highway 56, just to the left of "Poway" on the map. The fire is probably three miles north of us.) And this is only one of at least five fires burning in San Diego. 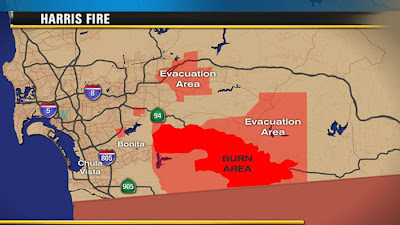 This is another one. As you can probably tell, it also covers hundreds of square miles. There are three or four other major fires burning in the county as well.

In fact, at least 500,000 people have now been evacuated. More than 1000 homes and hundreds of commercial buildings have been lost in San Diego, and more are going up in smoke all the time. Every hotel room in San Diego county is full, and evacuees are now being evicted from hotel rooms to make way for thousands of people who are supposed to be arriving today and tomorrow for a medical convention in San Diego. (If you are one of them, please stay home. You don't want to be here right now.) While there are many official evacuation sites, several of these have been evacuated, and at least one is currently threatened by a raging fire and cannot be evacuated. That center has been covered in flame retardant and the evacuees will weather the fire there. Spontaneous evacuation sites have sprung up at Qualcomm Stadium (home of the San Diego Chargers) and at Mission Bay, with thousands of people taking refuge at those sites with horses, dogs, and assorted other animals. The Del Mar Fairgrounds have been opened to the public and their horses.

The evacuation has been remarkably smooth and orderly, especially considering that San Diego has no experience in mass evacuations. People who have not been displaced have turned out in droves to volunteer at evacuation centers and to drop off water, food, clothing, tents, blankets, and supplies for the evacuees. There has not been a single report of public disorder or criminal activity at any of the evacuation sites, official or unofficial. And in all this chaos, only two people have lost their lives so far.

We are grateful that there have been so few injuries and so little loss of life, although our thoughts are with those injured and with their families. Please continue to send your good thoughts and prayers for our city.
Posted by Yarnhog at 2:43 PM

I've been checking bloglines all day to get your update, then just came to your blog. Glad your are home and safe. Ken is wathcing news clips on his laptop, it is really heartbreaking. and scary.

p.s. you are a wise parent. I will take your advice to take no advice.

I've been thinking of you all day. It's on the news, and we know it is bad. Take care.

I too have been thinking of you today. Stay safe. ::sends thoughts of dampness and calm winds::

If only the collective concern and prayers of thousands could have an instant effect - cool rains would fall all over California. Thank heavens for the blogosphere so we can keep track of one another. It IS heartbreaking; scary redux of the feelings I had during Katrina (and ironically, New Orleans is flooding). We have no mountains, no ocean - but only the occasional tornado. Yep - thinking of you, with all the others.........

So sorry to know that you and hundreds of thousands are living with such a horrific event hanging over your head.

i was watching this all over the news tonight. my heart goes out to you and everyone there. sending prayers your way.

This brings back my memories from when I lived there about 4 years ago. My husband was recruiting out of Mira Mesa and we lived in Lakeside and were surrounded by fire. I didn't sleep that night. No fun what so ever. One brother in law lives in San Diego, the rest is in Corona. Glad to hear you are ok.

My heart is with you. I really hope the flames abate soon.

I also thought about you today. I'm glad you are okay but please don't hesitate to get the heck out of there if need be! I am thinking good thought and praying you get a whole lotta rain right about now!

Thinking of you - excitement nobody needs. What a terrible thing,
Li

Unbelievable. You and your family remain in my prayers!

I lived in a fire hazard area for more than a decade after we moved out here and I'll never forget how tense those times were. I pray for peace too.

I've been tninking of you all day! They've preempted Boston Legal for the special 20/20 about the fires.

I'm glad to hear you and your family are safe. I send many vibes that it will stay that way.

I'm sending more good thoughts and prayers your way. These fires suck. That's the understatement of the year. Stay safe!

OMG! I didn't realize you'd been evacuated! I'm sending all of my good thoughts and wishes your way! Keep us updated if you can? Eeek.

what a scary time for you and your family. How are your kids handling it? My son's girlfriend just started at UCSD and was evacuated today. She is home and safe, classes canceled for the week. We continue to pray for all of you in harm's way. Take good care.
Jennie

Oh, man - I have been thinking about you since I first heard about the fires. I am keeping my fingers crossed that your luck holds and that your family and your friends all stay safe and don't suffer any major damage. Fire sucks!!!