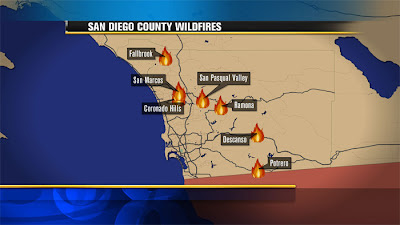 See all the little flames? That's where I live. And see this? 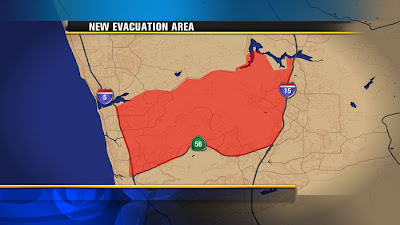 I live in that red area. The evacuation area. That is to say, I live there with my husband, two kids, two large dogs, a tortoise, a snake, and a gecko. We are all packed and ready to go, but since none of the fires seem to be very near us, the evacuation centers keep evacuating, and there is still an open route out of here, we are sitting tight for the time being.

This is what we call "fire season" in Southern California. Every year in October, we start getting antsy about fire. Summers here are dry. No rain at all. And in the past couple of years, we've had only 3 inches of rain the entire year, which is even less than our usual 9 inches per year. After the long, dry summer, all the vegetation is as dry as tinder. And then in October, the Santa Ana winds kick in. These are high, hot, dry winds blowing off the desert from east to west, the opposite of our usual on-shore flow. The high winds tend to blow down power lines, which spark fires, which are whipped into an inferno and spread quickly by the hot, dry winds.

Four years ago, we had huge fire storms, this same week in October. The whole city was choked under a blanket of dark smoke, the schools were closed, and we were all trapped inside for a week. Whole neighborhoods burned down, and the mountains outside San Diego were just devastated. My best friend, who is a fire chief in the mountains, lost her home, and nearly her life, fighting the fires. Many homes still have not been rebuilt.

This time around is reportedly even worse. There are more fires. The winds are higher. The vegetation is drier. And none of the air tankers can take off because of the winds. There is no containment of any of the fires, and several neighborhoods near us are burning. When we went to bed last night, the largest of the fires was more than thirty miles away. Now it is less than five, and moving quickly. Over 100,000 acres have burned and 250,000 have been evacuated.

If anyone has a direct line to the powers that be, could you put in a good word for San Diego, please?
Posted by Yarnhog at 9:31 AM

My only peace comes from knowing that I cleared my land of brush the best I could.
If we do evacuate residents with swimming pools have been asked to put signs on their garages so that firefighters know where water sources are.
Everything is working against us this time, dry brush, high winds, hot weather, water shortage and not enough firefighters.
Are you busy knitting?

Not good is right!! That is terrifying.

I have been, and will continue to pray. What a fearful situation. We just have to deal with the smoke, wind, and ash here... and that's enough for me.

I was just reading an article on the situation in parts of California - San Diego specifically - and was thinking about you. I certainly hope the temps take a drop and the winds die down soon.

Prayers with you all from Ontario, Canada.

OOOh, stay safe yarn hog! We be lost without you!

I second the uber- I was just watching the news and thinking of you and there's the post. Sending moisture thoughts your way. keep us posted as you can.

My little sis lives in the "red area" too -- luckily she and her dog were already visiting my parents further north, but her roommate had to evacuate the chinchilla. (Leave no chinchilla behind!)

Scary! I was in Oakland during the big Oakland/Berekely hills fire. I think that was in 1991. It was horrible. The whole hillside went up. Stay safe. I hope you don't have to evacuate but its good that you're ready. Thinking good thoughts for you!

Oh please don't wait too long before you leave! I will send all my positive thoughts your way. I am thinking how lovely rain would be down your way. Or snow. Stay safe.

I was thinking of you today as I read about the fires around San Diego. Stay safe -- that includes all of you, even the gecko. And the snake. While it would be so very sad for you to lose your home, it would be tragic to lose one of your family.

We're all pulling for you and hoping that these fires are brought under control soon...

thinking about you. I wish last week's rain here in the Pacific Northwest could have been somehow diverted to your area.

I continue to be concerned. Dan said the smoke was so thick in his classroom today that several of the officers in training had difficulty breathing. I went through a bad fire in 1989 in Ventura (near Malibu) and we waited too long to evacuate. I have a very vivid memory running toward flames to help my neighbor try to release his horses from his barn. We were successful in getting five out but six more were killed in the flames. If the fire gets close, don't wait. Get out of there. I will continue to keep you in my thoughts and prayers.

Scary... I hope you and your family don't run into any trouble. I remember growing up in northern california and we had to evacuate once. really scary business. Stay safe!

It's even on the news up here on the west coast of Canada. Wish we could send you some of our rain.
Will be thinking of you.

Hoping and praying for the best from Norway too. You're on the news. If only we could pass over some of that rain we have!

The CA fires are all over the front pages today. I just said a prayer for you & your family. Stay safe & keep on knitting!