I commented last week that one must have WIPs to have FOs. At the time, I had no WIPs to speak of, since I had just finished three projects. But now? Well, those WIPs are gearing up for a coup.

First, we have Icarus, of course. Moving along nicely. (Or at least, it was until this morning, when I tried to work on it during the first-ever meeting of my new SnB. While I have sufficient brain-power to talk, or to knit lace, I evidently do not have enough to do both at the same time. Icarus is now awaiting tinking back to figure out just where I started making yarnovers one stitch too early.) 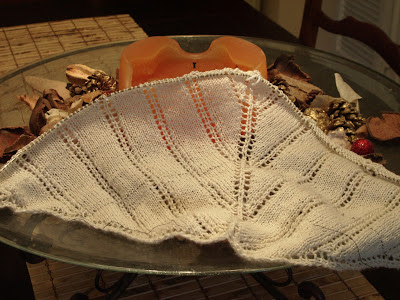 Next, we have the new, as yet unnamed, jacket. I really love the colors and sparkle of the yarn. I'm not really loving the finished fabric. It's kind of heavy and inflexible, and the metallic thread makes it a little scratchy. There may be frogging in its future. 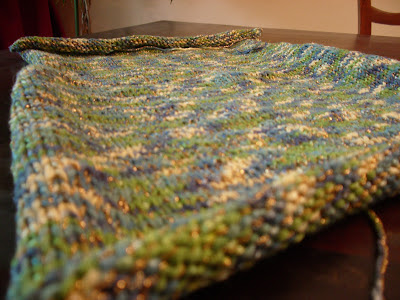 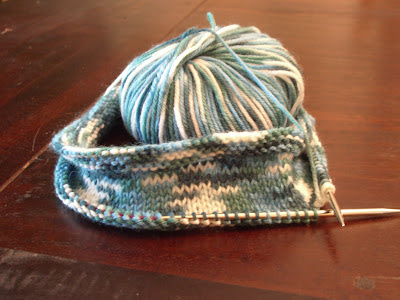 This is the the beginnings of this twin set from "Knitting Lingerie Style" that I felt compelled to cast on last night. 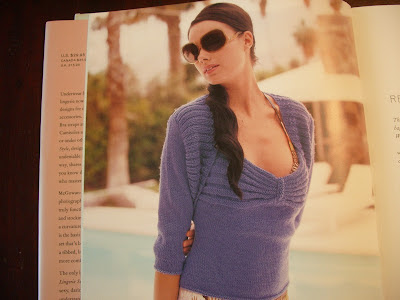 And this morning, an old friend called with the news that she just gave birth to her third child. (She's 43 and now has three kids under the age of five. Can you imagine?) I didn't even know she was pregnant, and I'm feeling bad about that, so I think a baby sweater is in order. I'll be casting that on later today.

My new books and yarns are due to arrive today and tomorrow, so I'm thinking this frenzy of casting on is far from over. Fortunately, I have a limited supply of needles, so I'll have to stop eventually. Or buy new needles.

P.S. If you haven't seen this yet, take three minutes and watch it now. It will brighten your day.
Posted by Yarnhog at 1:10 PM

You are quite the photographer today as well. I love the pictures you took. It may lead to an icarus pattern for candles-

I feel like the knitting police (or my husband) will fine me for too many wips. I allow myself one for the bedroom, one for the tv and one for the road. When I have more than that something eventually gets frogged.

Someone's meme talked fairness to stuffed animals when they were little- I was like that then and I think a little of it carries over to my wip's. If I have too many I get the guilts over neglecting them. More stress than I can handle. Maybe if I see you, as my personal knitting inspiration, go through another round of FO's, I'll get a little better at that.

When I saw that Lingerie book on the shelf, I harumphed and moved on. I saw it last night at someone's house and actually looked through it. Must. Have. So many cute things in there! Judging a book by it's cover?? How cliche can I be?

You are certainly turning your WIPs into FO. That shawl looks nearly finished. You deserve to cast on some new projects.

I'm a firm believer in having many wip's going at once. It usually keeps me from getting bored. Although that isn't working well for me lately.

Icaurs is coming right along!

Thanks for the video link, always love a rags to riches story. And I never start all those WIP's, those little bunnies breed in my bag when I'm asleep and I find them all over the place.Shhheeesh. Don't blame me for what nature has set into motion!!

Thanks for the link! I like when Simon is blown away by someone's talent.
Icarus is looking great.