I thank you all for your words of concern regarding my decision to remain monogamous toward the baby blanket until it is done. I, too, had qualms about publicly declaring my intentions, especially since it is not true love. Not really even true like. Which, of course, is why it took five years and a desperate ultimatum, but I'm happy to announce: 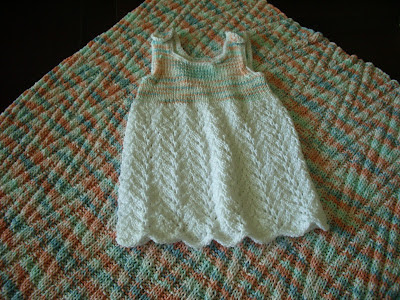 The more detail-oriented among you may realize that I waited to commit to knitting monogamy until I was only a few inches away from finishing, but seriously--did you really think I could keep it up for any significant amount of time? There is Cotton Fleece in the stash! There is Sea Silk! I am going on vacation in a couple of weeks, on a plane, without kids! What kind of fool would tie herself to just one project in the face of that sort of temptation?

And so, it's over. The baby blanket and I are officially separated. I don't know about the blanket's plans, but I'm going to fondle some silk.
Posted by Yarnhog at 10:44 AM

oooh... you're a tricky snicket- good plan on waiting to announce monogamy. I'll have to put that in my stash of tricks. What a lovely present and that friend is going to think you whipped it all together in just days.

Congratulations. The set is lovely and go well together. Good decision to commit monogamy. Vacation? On a plane? Where are you and Ross heading?

Wow--I'm impressed! I'll have to remember that tactic for if I ever declare monogamous knitting (like that would ever happen :)
The set looks great and I really like the blanket. I can see how the blanket might be hard to stick with. I've made exactly ONE, and it took me forever!

It's a spectacular set...beautiful! I definitely struggle mightily with knitting monogamy....

I think the blanket is wonderful both in colourway and in texture. I am glad you finished it.