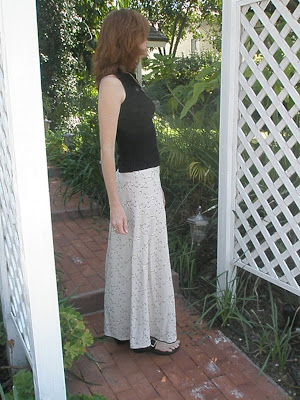 I finished my second skirt. This one is also an embroidered linen blend (I'm sensing a theme here).

I made this using the same basic pattern as my first skirt, only using Frances instead of my mom's sewing machine. I am happy to report that Frances works like a dream. 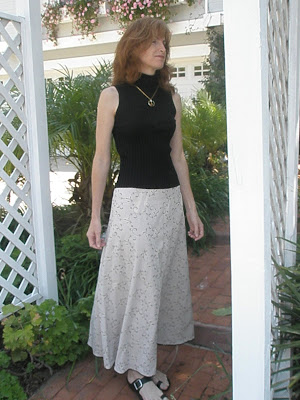 I did learn something new about her, though. She doesn't have a zipper foot. It's not missing; it was never there to begin with. As a brand new sewer, I thought you could only sew in a zipper using a zipper foot. This is not strictly true. It is possible to sew in a zipper with a regular presser foot--at least it is if you're an experienced sewer. For me...well, it didn't go so smoothly. I had to rip out the zipper at least four times. I tried to use the advice some of you gave me about basting the seam together and then sewing in the zipper instead of making a lapped zipper, but the presser foot kept pushing the zipper to the side so the fabric wouldn't cover it. Finally I just gave up. 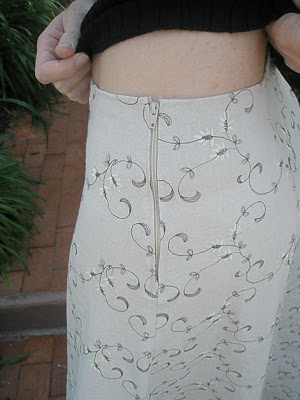 So this zipper is wonky, too, but in an entirely different way than the first one. Fortunately, I'm not all that picky about my attire; I figure no one will notice it anyway. (If I'm wrong, I don't want to know.) 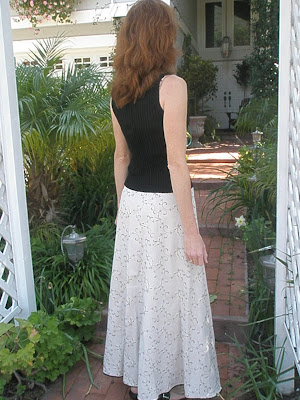 If you look closely, you can see that I added a black bias binding to the hem. It adds a little weight and makes for a nice swinginess. It wasn't hard to do, but I mistakenly bought very narrow bias binding, which made it a little tricky to sew on. Next time I'll pick something wider. Live and learn, eh?

P.S. I'm still desperately seeking bobbins for Frances. Again, if anyone knows of a source for obscure bobbins, please let me know!
Posted by Yarnhog at 6:00 AM

It looks great on you! Can't help with the zipper, though...

Have you tried a local repair shop? Maybe they'd know someone or have some antique parts laying round the shop?

Looks good on you.

You go girl! I am so impressed by your daring and success.

Another great skirt! I just picked up a zipper foot yesterday. They're super cheap - the one I got is adjustable, and was only $3.50!

Love the fabric and the skirt. Looks great and I would not have noticed the zipper.
Have you tried that Sewing machine and vac shop in Poway? Maybe they have old bobbins, or maybe even a pawn shop. They may have old models.

Hello.
I just wanted to say, that it always helps basting the zipper in place before machine sewing. Saves a lot of time and makes for better results. You are learning really fast, I know it took me a lot longer to get the results that you are already getting. Keep up thegood work and have a great day.
Jenny

I don't remember a zipper foot on the old girl I learned on many moons ago. But the way I used to put the zippers on was to hand baste the seam together, press open. Pin and hand baste both sides of the zipper. Carefully cut the seam basting open. Now you can push the zipper pull out of the way when stitching the zipper. A bit fiddly when trying to do this with the machine needle in the down posititon so you won't lose your neat line of stitching. It actually sounds more complicated than it is.
Nice job on the skirt...I like the colour.

You look wonderful in the linen skirt. And I am so impressed and inspired with your new studio. It looks like and organized and creative space.

Love this skirt, too, and the zipper really doesn't look wonky at all! Plus you're right - no one ever notices these things. I like the black binding on the hem - it adds a nice finishing touch to the skirt. What's next? :o)

Nice skirt and I love your new sewing machine in your next post!

My secret for side seam zips is to fusetape the seam edges - because they are slightly bias they stretch easily and cause your zip to pucker, and fusetape prevents this so your zip sits nice and flat. (I've just posted about fusetape on my blog!)