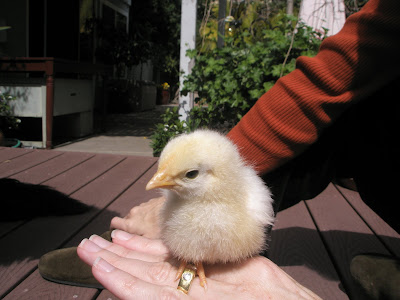 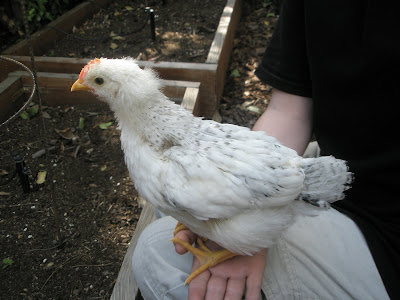 That's Izzy in both pictures. She was less than a week old in the first and is about four weeks in the second. We call her "Godzilla Chicken."

Maggie is growing, too, but not nearly as fast. She's a smaller breed to begin with. Here she is at less than a week:

And now at about four weeks: 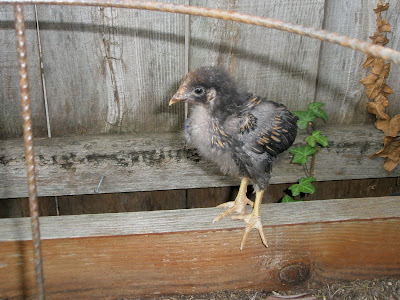 I couldn't get her in my son's hands; she's pretty skittish. Here she is with Izzy for scale: 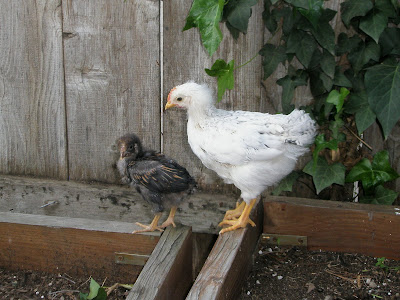 Do you have any idea how hard it is to get chickens to pose for pictures? It took a whole lot of tries to get this one. Most of them looked like this: 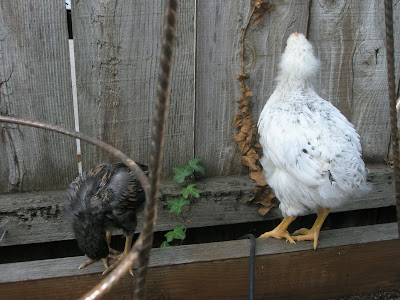 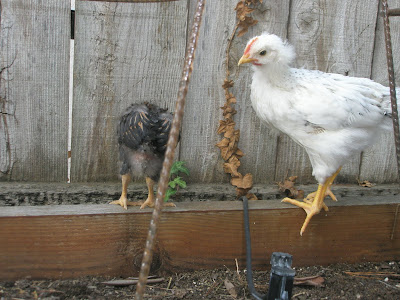 Or this (I think they may have been trying to tell me something): 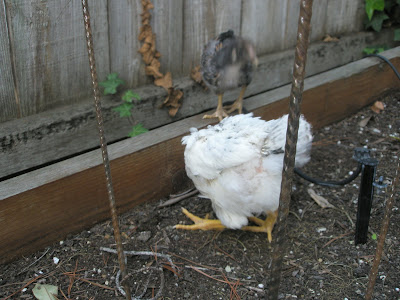 Despite being nearly fricasseed in our little heat lamp mishap, they are both doing well. They are old enough now that we let them out in the (as yet unplanted) vegetable garden for a while every day. They're still too little to be left alone; we have crows and hawks and cats in the neighborhood. In a couple more months they will move out here permanently. We have a chicken coop of sorts to lock them up at night, and the chicken wire will be going up on the fence before the big move. And a couple months after that...fresh eggs!

That's a lot of chicken bum!
So glad they are doing well. Chickens are great pets.

Mooned by chickens. Must be spring break. ;)

they are really cute!!!

I had a chicken once (a Rhode Island something I think) and we had a mishap like the lamp incident. My parents had a gas fireplace (that heats up like a sonofagun) and the chick fluttered up and towards the fireplace, landing on the hearth next to the glass. There was a lot of yelling and the smell of burnt feathers but all was well in the long run. :) Chickens are just that way I guess.

Holy crap, Izzy grows fast! How very cool it will be to have fresh eggs!

Enjoyed the pictures. A "posed" picture is usually the accidental one. It was fun to see the ones that didn't work!

Oh man, I tell you, if I had a backyard, there would also be a chicken coop. But for now, I'll just watch your two girls.

CUTE! We wanted to get chickens here, but the township doesn't allow it unless a person joins some chicken association (which farmers have to do anyway) and the costs outweigh the benefit and fun of having a chicken (or two) ... Maybe I'll just have to visit yours. :)

I love chickens. And fresh eggs.
And trying to take their pictures -- priceless! lol