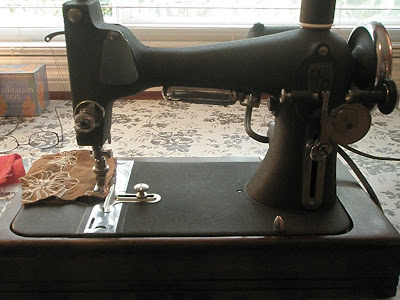 This is the sewing machine I inherited from my great-grandmother, via my great aunt and my mother, who gave it to me two years ago. My mom was very close to my great aunt Fran when she was growing up, so in honor of Aunt Fran, I've named her Frances.

I've been wanting to try her out ever since I got her two years ago, but I got distracted by other things, and then I discovered the needles she needs (and everything else, for that matter) are no longer generally available. I have half a dozen of the original needles, but I wasn't willing to use any of them until I found a source for replacing them. I am pleased to report that eBay came through for me again; I have a pile of "new old stock" needles on their way.

With no more excuses, I returned my mother's sewing machine so I wouldn't be tempted to take the easy way out and sat down yesterday afternoon to figure out how to use her. I spent the entire afternoon reading the manual and trying out different things, like this seam guide: 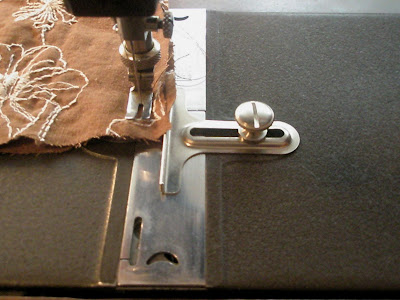 I learned to wind the bobbin, which was interesting. This is the bobbin winder: 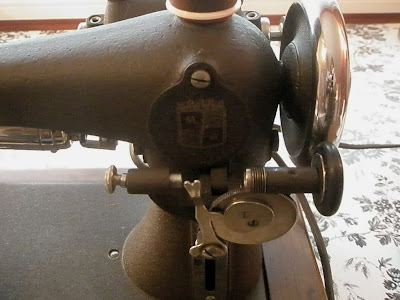 It's not intuitive. And the manual is perhaps a bit more vague than a modern one would be. I spent at least two hours trying to locate the "brake button", including a lengthy visit to Google, with no success. Somewhere on the machine is a button that stops the sewing mechanism while you wind the bobbin, but I played with every single part of that machine and never found it. It's not on any of the diagrams in the manual, and there is only the single reference to it, so I couldn't work it out from context. Finally I decided to just wind the bobbin without stopping the mechanism. It worked fine, although it was a little noisy.

After I got the bobbin wound, I realized I had wound it with the wrong color thread (natch). There is only one bobbin, and it is nothing like a modern bobbin. I thought for a long time about how to handle this without having to unroll all the thread on the bobbin. Eventually I had the brilliant idea to see what sort of bobbin my other antique machine has. Sure enough, it looked identical! I popped it into the bobbin winder and wound on the correct thread color. I carefully followed the manual's instructions on how to thread the shuttle (the shuttle in a "vibrating shuttle" machine like this holds the bobbin; the shuttle actually passes through the loop of upper thread under the needle with each stitch to lock it in place). I placed the shuttle back in the machine...and that should have been my first indication that something was wrong. The manual said nothing about having to force the shuttle back in place. I was certain I hadn't had to struggle to get it out. But there was no diagram showing how to put it back, and there was only one way I could get it back in, which wasn't easy. Still, I persevered, and finally got it clicked into the shuttle carrier. 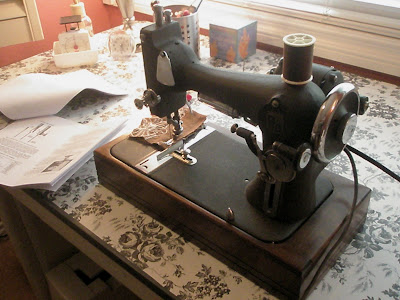 And then I spent two more hours trying to get the needle to pick up the lower thread, entirely without success. I read the manual again. I searched the internet. I turned to my engineer husband. I printed out a schematic of how long shuttle machines work. Nothing. And then it occurred to me to try the original bobbin again. It picked up the thread the first time. It turns out, the two bobbins are not the same. They are very, very similar, but apparently close enough...isn't. Which is a shame, since I ordered ten more of the wrong bobbins from eBay before I realized this.

Another online search turned up not a single source for the bobbins for this machine. It looks like I'll have to make do with a single bobbin for now. [If anyone knows of a source for obscure bobbins, please drop me a line!] 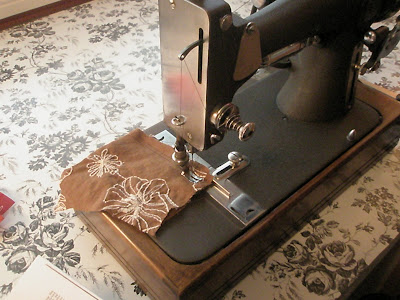 I'm getting ready to start my second skirt now. This one will be made along the same lines as the first, but using Frances instead of my mom's Husqvarna. And then we'll see whether I can get along with this 70-year-old machine, or whether I'll have to break down and buy something from this century.
Posted by Yarnhog at 3:15 PM

If you can conquer the bobbin shortage, I predict you will love Frances. The older machines were built like tanks. They sew perfectly, perfect tension, perfect stitches, over and over and over.

Bobbin winding: Try this. Left hand on the big wheel at right end of machine in order to hold it still. Right hand loosen the small wheel inside the big one. Turn it toward you (I think). This should let you run the bobbin winder without the rest of the machine going nuts. When done, just hand tighten the little wheel again. Ta Da!
Paula in Iowa

I think Paula from Iowa is probably right about how to stop the needle from going up and down while winding the bobbin. My mother's sewing machine, which my sister still uses, is 65 years old - so basically the same vintage as yours - and that is EXACTLY the way we used to wind the bobbin. You loosened the small wheel inside the larger one to wind thread onto the bobbin, and then tightened it again to resume sewing. I hope this works. Susan

Love the sewing machine and the skirt. You might have better luck with the zipper in the back seam than on the side. I have been sewing for a long time and usually the back zipper lays flatter.

If you could post a photo of the bobbin, or a model number of the machine, there is an amazing guy here who works on vintage machines that might be able to help. Contact me at kchamp at nrtco.net

I loved your yarn room also..

Yes you usually either pull out or twist to loosten the bit in the middle of the wheel when winding bobbins.

My Mum had a very old treddle Singer sewing machine she used it for curtains mostly and got up an amazing head of steam!

Frances is lovely. I totally agree with others, post a pic of the bobbin with some dimensions. I'm sure there are several of us that might have some. I've got a whole slew of bobbins that don't fit any of my machines perhaps some of them will fit. Pix of top and bottom as well as a side view. Take a pic of the shuttle too it might help, as well as the name brand and model number, although if I knew what machine all these orphan bobbins fit they wouldn't be orphans! BTW, it's a good thing you didn't brake the needle while you tried that other bobbin, the broken pieces can go flying, been there, done that. Close your eyes or wear goggles when trying new bobbins you aren't sure of and "walk" the needle through by turning the wheel by hand instead of running the machine. If you have a untested needle or bobbin, the needle could break or you could knock the shuttle and/or race out of alignment or even damage them. To find a replacement shuttle or race would be nearly impossible, if not costly.

Frances is beautiful!!! I hope you have luck in finding new bobbins for her, and that you will get to use it a lot!

Welcome to Frances! I'll bet she's been sitting there thinking, "If I could only tell her how to do this...."

I love old machines. I have 2 Singer treadles, one Lotus & one Redeye. And a couple of Singers with plugs-so-old-as-to-be-dangerous that were my mother's and grandmother's. Nothing like them. They will outlast cockroaches.