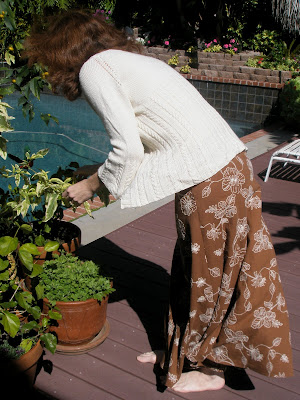 My first sewing project is done! And it took less than a day. Man, sewing is fast! 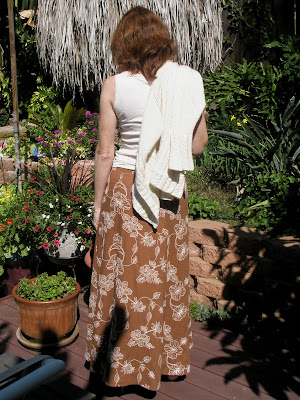 I knit because I love it. My motivation for overcoming my long-standing fear of the sewing machine was different: I need clothes that fit. I am tall, with a small waist and curvy hips. It is difficult to find anything that fits when clothing is based on a size and shape that has little in common with my actual measurements. In particular, I've been searching for skirts I like for several years. I don't generally wear shorts--they make me feel too exposed--and long, lightweight skirts are a good option in hot weather, which we have a lot of hereabouts. It's not easy to find skirts long enough, or in the style I prefer.

I was greatly inspired by Stitchywitch of Green Apples, who is an amazing knitter and crocheter, and recently added sewing to her list of accomplishments. She has been documenting her progress in making clothes that suit her style and shape for some time, and apparently it's contagious. 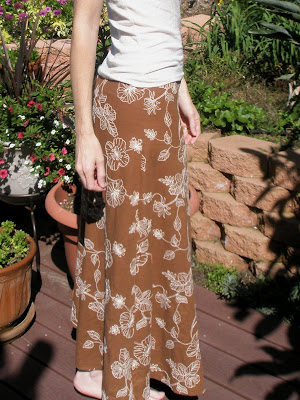 Despite my list of things learned from yesterday, I really enjoyed making this. It's a different sort of thing than knitting, because for me, at least, it's more product-driven. But that's okay when you can whip out a skirt in less than a day! And I'm happy with the results. The fabric is lovely, a linen blend with pretty embroidery. The fit is just what I was going for. The finished product is not perfect. The zipper is a little wonky: 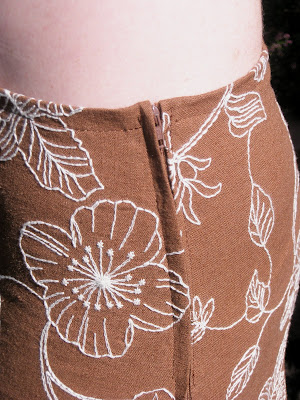 Not too bad, but certainly not perfect. This was the first time I've ever used a zipper foot (obviously), and it was different than hand sewing a zipper. I considered doing it by hand, but decided the object here was to learn to use the machine, so I sucked it up and gave it my best shot.

I'm not at all sure I got the hem straight, either. I pretty much just folded the edge under, ironed it in place, and sewed it down. And I tossed out the pattern instructions when I hit the waistband, because I realized that adding a waist band would make the skirt sit higher than I wanted. In fact, I ended up ripping and resewing some of the seams to create a little more ease around the hips so that the skirt would sit lower than it originally did. I also ignored the length of the original pattern and made this significantly longer. But the pattern was really useful for getting the panels shaped right. 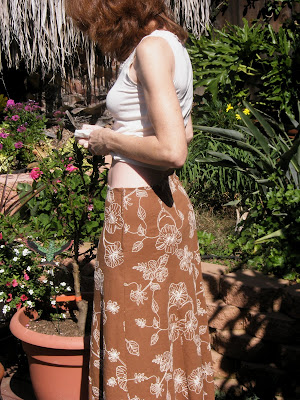 In fact, I've already bought more fabric for another skirt based on the same pattern. And maybe some for a summer dress. And...um...

Good work! You will never again be at the mercy of the ready-to-wear dictators.

I have a similar problem, long legs, wide hips and a much smaller waist. I acutally had some one at a store tell me it was "impossible" that my wait could be 10 inches smaller than my hips "as the norm is 6 inches difference"

The skirt looks great. I also hate wearing shorts, but I have no shortage of long skirts for the summer. I love them

I took up sewing for the length as well. That is quite lovely.

Such a lovely skirt! And the zipper looks good, I'm terrible with them.. usually have to do them more than once to be happy..

And the hem? I'm a perfectionist... which isn't always a bad thing, but my Mom (she taught me to sew), said to remember.... "it'll never be noticed on a galloping horse"..

Because you're mostly in motion and anyone watching won't be able to see if the hems are just a fuzz off!

I have a wrap skirt that I LOVE and it doesn't require a zipper... fyi..

For your zipper concerns, get a weenie hook and eye and handsew it right above where the zipper pull stops.

Its looks great on you. I've started trying to learn to sew too...I'm using my 5 year old as my first guinea pig :) then I may have to step up to the plate.

A zipper on your first project! I avoid them like the plague. It looks very nice.

Great skirt!!! It looks really good on you, and I love the fabric. I seldom wear skirts- there is always the trouble of finding shoes that match...I'm tall with really large feet...- I love to sew though, and have done so ever since I was a teenager. My parents bought me a new sewingmachine last summer, and it is so much fun!

Really beautiful Skirt! I may let myself get tempted to try sewing again :-)

Lovely! You did an awesome job!

I've always thought I should learn how to make some basic clothes because I like simple clean designs and those aren't always easy to come by. Especially when the summer clothes come out here, everything is neon and they all look like victims of rhinestone shrapnel. Not attractive.

Love the fabric, too!

I know all about Stitchywitch's blog and how contagious it is: since she picked up sewing I've been thinking about learning it myself. My MIL loved the idea and gave me a sewing machine for my birthday, and as soon as there's a little bit of time (read: as soon as I finish my damn thesis), I'll start. Now I've got your blog for inspiration as well (and should I begin sewing soon and never finish my degree, well, you're to blame. Beautiful skirt!). Your motivations sounds familiar as well: six feet tall, curvy hips... etc. etc.

That is awesome! I don't have the confidence to try clothing yet!

Me thinks that you are a natural,you are already modifying patterns and doing it your way. That is the sole reason i love to craft. I am not always the best at each endevor but I really enjoy the ride