I'm generally not much for hats. I don't like to wear them, for all the usual reasons: I look silly in them, they mess up my (admittedly not all that well styled to begin with) hair, they itch. Since I live in a climate where hats are almost exclusively a fashion statement (although what all those guys are trying to say with the brims facing backward escapes me) rather than a necessity, I've only knitted one hat in my life. You may remember last year, when Younger Son was required to "dress like a 19th century immigrant" for school, and I knitted him a newsboy cap. It was worn once, for about ten minutes, and that was the beginning and end of my hat knitting experience. Until about three weeks ago.

The hat craze started with Oldest Son (who rarely makes an appearance on this blog). He is 23 and just finished college, and he specifically requested a knit "beenie" in his school colors (black and gold). [For the record, and because I know some of you are doing the math and concluding I must have given birth in middle school, he is my stepson. But I started dating his dad when he was seven, and I figure 16 years of raising a kid gives me the right to refer to him as my son in casual conversation.] I wasn't especially enthusiastic about the request, but, hey, a knitting request is a knitting request. So I spent a few hours and whipped one up to stuff in his Christmas stocking. Alas, it made so little impact on my knitting psyche that it didn't even occur to me to take a picture. But as little ripples spread out far further than you would expect, so does word of knitted caps in winter.

The next "request" (okay, so it wasn't so much a request from him as an offer from me) came from my brother. He has recently started shaving his head (to deprive Mother Nature of the satisfaction of rendering him completely bald, I suspect), and his head gets really cold. He was wearing an ill-fitting machine-made synthetic fiber knit cap when I saw him over Christmas. He complained that none of his hats fit and that they only come in ugly colors. Well. How could I leave that unanswered? So I mentioned I could, you know, make him one, in colors and size of his choice. He looked a little skeptical, and joked that maybe I should just make him a sweater, like the one my husband was wearing. I don't think my brother has quite caught on to the fact that his sister knits, because he was astounded when I pointed out that I could, in fact, make him one just like that, since I had designed and knitted that very sweater. I don't think he actually believed me, come to think of it. Nonetheless, I went home and knitted up this: 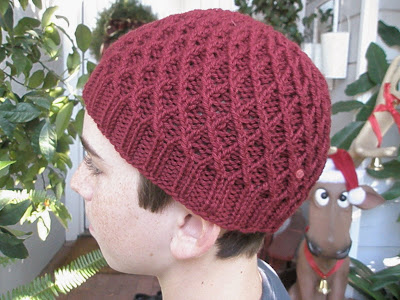 This is the ubiqitous Koolhass, by Jared Flood, and there are about 7 million examples of it on Ravelry. Apparently, though, I'm stupider than all 7 million knitters who have gone before me, because I ripped this sucker four times in three different spots, due to my complete inability to distinguish between "k2tbl" and "t2togtbl", which led to a particularly strange decrease pattern that bore no resemblance to the actual pattern. Or a hat.

Still, it is a wonderful pattern, and I did eventually work it out. This one was done on size 5 and 7 circular needles, magic loop style, with about half a skein of Cascade 220 from stash.

And I thought that was the end of the hat-knitting. Alas, I was mistaken. It seems there is something about hats that draws attention in a way no sweater ever has, because Older Son immediately decided he just had to have a "beenie," too. Since he was heading off to sixth grade camp in the mountains for a week, this seemed a reasonable request, and I asked him what sort of hat he'd like.

Blue, "without all those criss-crossy things" (although he did allow the ribbing): 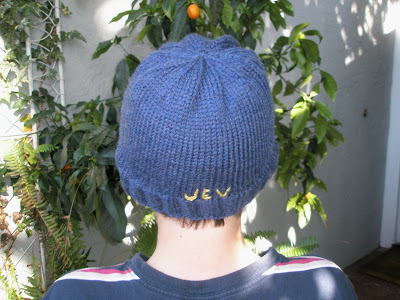 The yellow initials at the back were also by special request, "so that no one could steal it." This one was also done on size 5 and 7 circs, magic loop style. The yarn is Knit Picks Swish Worsted, which I had left over from another project. [And again, I break in here to point out that the hat is shaped exactly as a hat should be. Those odd lumps on the sides are his ears, which evidently stick out much, much further than I ever realized.]

Any of you who have kids know that, at this point, my fate was sealed. There is no way you can give the same thing to two of your kids and not to the third. Younger Son put in his request for a dark red hat "just like Uncle Joe's, but with a different pattern." Hmmm. If you're at a loss as to how to interpret this, you're not alone. Younger Son is...picky. And not always clear in expressing his vision to those less enlightened, such as his mother. A little interrogation led me to make him this: 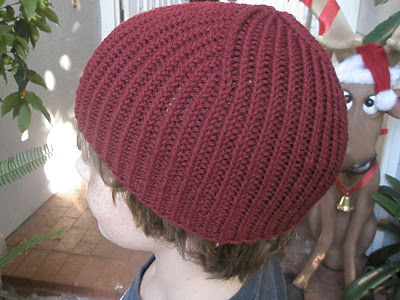 I based it on this pattern I found on Ravelry. My gauge and sizing were different, and he didn't want a rolled brim, so I made the appropriate changes. My favorite part is the decrease pattern: 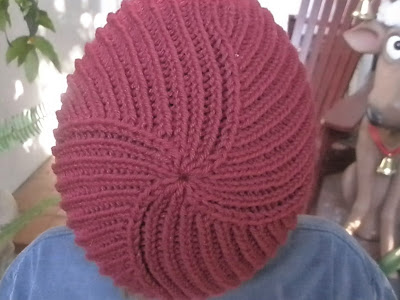 Isn't that swirl cool? This one was also done with size 5 and 7 circs, magic loop style, and the other half of that skein of Cascade 220. 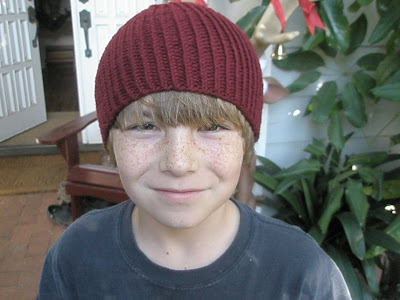 Although it's kind of hard to tell with all that hair in his eyes.

And now that every head in my immediate vicinity is clothed, I'm going to seize the opportunity to cast on a nice, satisfying sweater!
Posted by Yarnhog at 3:32 PM

It's hat time. I generally don't wear a hat, pretty much for the same reasons you don't (except that it is rather colder here in Wisconsin than it is in San Diego), but I just finished one for myself. Mmmm, hat.

All of yours look great! Four satisfied and warm-headed customers!

aww! LOVE those hats! (and the adorable freckles are working on me too). nice work.

Those are some nice looking hats! Isn't it fun to knit for people when you know they want it. And at least they just wanted hats. Growing boys probably aren't the best people to knit sweaters for.

Those are great looking hats! I don't wear hats much, either, but I do like to knit them because they're quick. And appreciated and worn more than sweaters.

Hats: they push your hair down into your eyes. But he's a cutie!

I'm not much for hats either, but I love knitting them for folks. Yours came out very nice! I especially like the Koolhaas.

Cute hats! I'm with you about hats. I've only knit baby hats. I figure they look cute and babies can't yank them off until they are a few months old. These look so good on your boys.

Cute hats! I'm with you about hats. I've only knit baby hats. I figure they look cute and babies can't yank them off until they are a few months old. These look so good on your boys.

I'm not so crazy about the hat thing either, but I wear 'em. Michigan winters tend to wear down your resistance to things like that. The hats look really good - I especially like the decreasing swirls on the top. Spiffy.

Those hats look great! I myself don't like wearing hats much either but they can be such a fun quick knit and immediately satisfying :)

Every time I see a Koolhass I think how cool it looks and wonder why I haven't knit one...

Brava! Great hats! and the wedge has opened up all those guys to the other possible yarny delights a talented knitting female might bring to their lives.

Although I appreciate the art and craft of hat maiming, I would never wear this type of hat. I wear a hat every time I go out. Stetson, Trilby, Fedora - that type. I have many and in different colours. I am looking for a red fedora but no luck.

Your hats are beautiful! You're not alone in the Koolhaas confusion. I made one successfully last month and so I wanted to make another one over Christmas for my dad. I kept frogging several times but I couldn't seem to concentrate on getting the pattern right. One of these days, I'm going to frog it completely and start over. :-)

I too am smitten with that swirl.

My dream hat to make (when I possess the fortitude) is a pillbox type hat for Mr. Sophanne. He requested a fez but I'm certain that's not what he wants. It's on my list of things to figure out. Whatever I find will have to be adjusted (I think that's why I'm not looking to hard) because he has the head the size of a melon.

What a parade of wonderful hats! I am in love with the swirl on younger son's hat.
Here's the fashion statement by backward facing brim dudes: they are saying "I'm a tool."

Great hats! I think they're fun to knit, and gnice to wear especially now wih the cold weather we've been having!
Love your son's freckles:-)