Yes, folks, it was an exciting Sunday afternoon.

I spent most of it turning this: 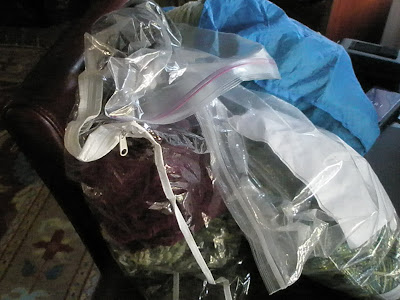 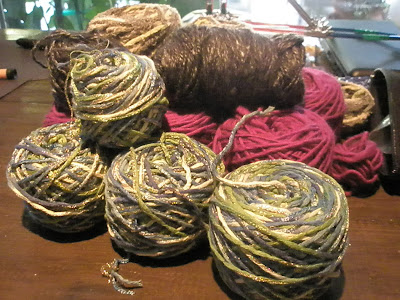 For the record, that's: one shawl, in my own handspun alpaca-silk, that just really wanted to be something else; the back of a cardigan, from my "novelty yarn" phase (now in the destash pile); the front and back of a pullover I started for my son about three years ago, before he announced he hated the pattern (I started over and made a completely different pullover out of the same yarn, but never did frog the first one); and the front of a pullover in (Hello? Did you forget you're a REDhead?) magenta wool. 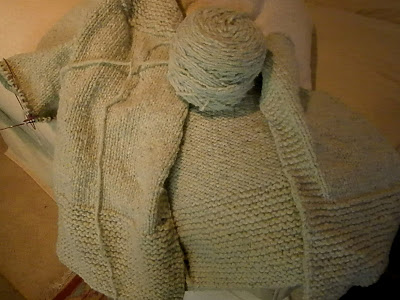 Do you remember the drama of the round yoke cardigan? The one I knitted and ripped about eight times in an effort to make the yoke work? The one I finally got going, only to discover, after the whole body was done, that it measured roughly 42" around? Oh. I didn't tell you that part, did I? I was pretty disgusted with the whole thing by then, since even I know that 42" (the circumference of the sweater) minus 35" (the circumference of my chest) = way to freakin' big! It's been in time out in the yarn closet for a while. Now it looks like this: 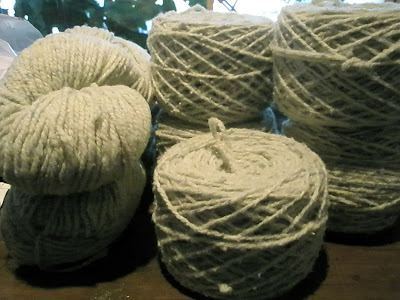 As a rule, I don't mind frogging failed projects, since, as far as I'm concerned, it's like getting free yarn (and besides, having no trace of a project in evidence makes it much easier to deny it ever existed). I have to admit, though, this one stung a little bit. I'm consoling myself with thoughts of all the lovely things I can do with this fantastic yarn.
Posted by Yarnhog at 3:17 PM

I am in complete agreement with your phrogging philosophy. Good riddance.

Oh and thanks for your karma! I blogged about it---I got a summons for federal jury duty on Friday! I am writing a letter to get out of it---hopefully! ;o)

Do you wind the yarn as you are frogging, or is there an intermediate step of pile-of- squiggly-yarn between frogging and winding? Just curious, because so far all my winding involves a compliant 7-yr-old DD to do the winding while I do the skein-holding. I think your potential helpers are older than that and less compliant (as in - they realize that winding yarn is really NOT the most fun thing that they could be doing at that moment in time) ;) Hope your dog is still feeling better.

That Beaverslide yarn wants to be something awesome that fits. I just know it.

Good work. I'm about to do an inventory and sorting of my wips as well. Either finish or frog will be my policy.