Is anyone else starting to feel that updates on the Aran Cardigan are becoming a regular feature on this blog? Most of my projects don't have such...um...staying power. Here's today's picture: 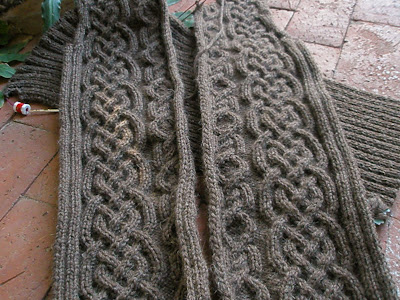 That's two fronts and an almost completed back. It's possible my love affair with rough brown yarn is beginning to wane. Ten million rows of 3x3 ribbing can have that effect on a person. Since the sleeves--all both of them--are also 3x3 ribbing, I'm starting to play games with myself to keep it interesting. Games like: "How many rows can I knit during the next set of commercials? How many rows can I knit without looking at my knitting? How many rows can I knit behind my back?" [Remember the scene in "Amadeus" where Mozart is playing the piano upside down and backwards? That's next.] But seeing the approach of the end of the endless back is heartening and may give me the strength to tackle the first sleeve, at least.

But while my urge to knit with rough brown yarn is fading, apparently my urge to spin with it is not. Check this out: 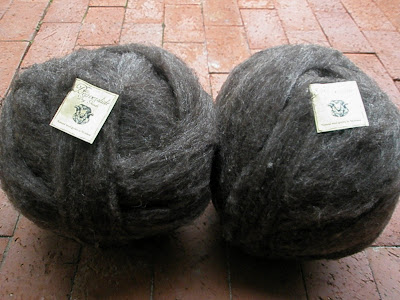 That is a lot of roving from my beloved Beaverslide Dry Goods. There was a reason for this, which seemed perfectly logical at the time. I was drooling over the various yarns on their website, as I am inclined to do on a regular basis, when I saw on the sale page that they were offering "natural black" roving for a truly amazing price. Being me, I quickly determined that I could buy and spin the roving and end up with about the same worsted weight yarn that they also sell on the website for a mere fraction of what it would cost me to buy the already-spun yarn. And I would get the added entertainment value of spinning it myself. Although I am (nominally, anyway) in a stash-abatement period, fiber does not count as stash, since I don't have any real fiber stash to speak of. I whipped out the American Express and ordered way too much roving.

Alas, when the roving arrived, I was sorely disappointed. It was a) not black at all, or even mixed charcoal grey, as described on the website, but rather a dark, chocolatey brown (which I love, but dudes, there is a limit to how much brown yarn I can possibly use); b) not even remotely like the the yarn I so love in texture, but instead coarse and very, very springy; and c) well, just too much.

But I decided it wasn't fair to judge it so harshly without even testing it, so I spun up the equivalent of a swatch: 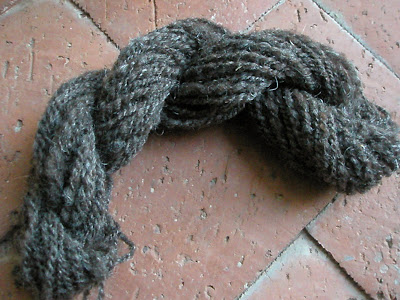 I didn't much enjoy spinning this, truth be told. I am spoiled from spinning commercially-prepared super-soft merino, alpaca, and silk rovings. This is a much-closer-to-the-sheep sort of fiber. It doesn't slip easily through my fingers while I draft, and there is no way I could ever make this stuff spin up smoothly. But after plying and washing it, it's starting to grow on me. Although it's not as soft as Beaverslide yarn, it's no rougher than the fishermen's wool I'm using for the Aran Cardigan. It has a nice springiness to it, and I suspect I will eventually decide it's just perfect for some future project. I'm not in a great rush to spin up this monster pile of fiber, but I imagine it will gradually fill up my spinning basket.

I realize this post is getting much too long, but I do want to show you one more thing before I go: 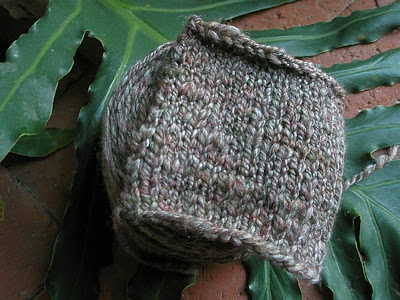 This is the swatch I knitted up for Wisteria, from the merino-silk roving I've been spinning. You can see that even knitting it didn't completely tame the lumpiness of the yarn. I've decided to call it "character" and move on. The good news is, I am getting gauge! I had pretty serious doubts about that, since the yarn seemed significantly heavier than worsted weight, but perhaps it's just fluffy. The swatch has a nice drape, even worked up on size 6 needles to give me 18 stitches to four inches, so I think Wisteria is a go!
Posted by Yarnhog at 8:00 AM

knitting games! crack me up!
the cables are so beautiful.

Beaverslide? I don't know hy, it just sounds rude and not something I would do.

I can knit andf chew gum at the same time; knit & watch TV; and knit with my eyes closed (practice for if I ever go blind). The aran is just rocking! I wil never tire of looking at that awesome display of cable. Nice balls of Beaverslide. teehee. Someday the perfect project for that roving will come along.

I was thinking about casting on a sleeve and a front or a front and the back and mixing up the knitting a bit.

Of course, I'll first need to wind the yarn...
Looking good - though grey on my monitor.

Oh wow that Wisteria is going to be something special:)

I'm totally intimidated by cables, so if I'd knit something as gorgeous as this, I'd be flagging people down on the highway and making them look at it! Please keep posting pix. I love this project. :-)

Your aran looks beautiful. K3 P3 can put you to sleep if you're not careful - I tend to bribe myself with television and yhe "how many rows can I knit during this show" game.