You know it's going to be a rough day when you awaken to a child standing beside your bed, saying, "Hey, wake up! I have to be at the bus stop at ten 'til!"

I, in my sleepy stupor, could think of no response except, "Ten 'til what?" It seemed a perfectly reasonable question, even though the answer has been "ten 'til seven" for nearly six months.

Unfortunately, this was at 6:42. Fortunately, it was my husband's morning to get up.

The day didn't improve a whole lot after that, but at least I have yarn and fiber to turn to for comfort.

I am slowly making progress on the Aran Cardigan: 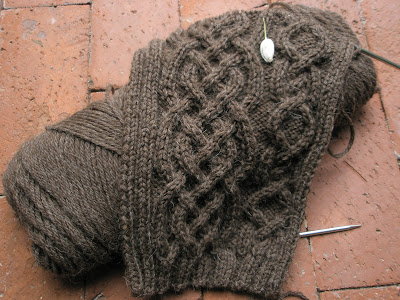 I know this looks the same as the last picture I showed you, but this is the second front! I also have about half of the back done. I am working it simultaneously with the fronts because it is flat 3x3 ribbing, and sometimes I don't have the concentration to work these cables, as evidenced by the four separate times I had to rip back the first front.

And I've finished the spinning for my Wisteria. Seven 100 gram skeins of worsted-ish weight two-ply wool and silk: 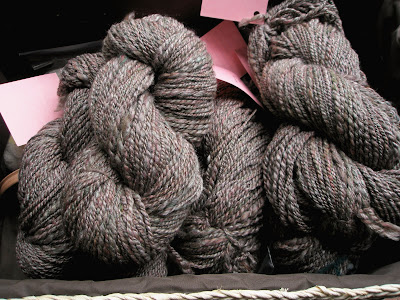 I still can't get a completely accurate picture of the color(s). It's mostly grey, with a purplish cast, due to the burgundy and green accents in the roving. I'm pretty happy with the way it has turned out, although I'm not convinced it will work for the intended pattern. If it doesn't, I have a backup plan for this yarn. It's a couple of projects back in the queue anyway. I need to finish the Aran Cardigan first, and then I have a very simple sweater project in mind for our annual ski trip, which includes 22 hours in the car. I learned my lesson about car knitting two years ago, when I tried to work a lace pattern with two kids and two dogs bouncing around in the back seat. Suffice it to say, I ended up ripping all 22 hours of progress on that one. Now I know: nothing but plain stockinette in the car. The added advantage is that I can knit stockinette in the dark, so even after the sun goes down, I can keep knitting. Obsessed? Of course not. Just...ah...determined.

I did mention that I'm not the driver, didn't I?
Posted by Yarnhog at 1:45 PM

I love love your blog--and yes, my dear, cable knitting is addicting. It is mentally stimulating, yet relaxing at the same time. A paradox, I know. You just might ispire me to take up knitting again!

Way to go on the sweater fronts - and back!

Guess what. I ordered the yarn for mine. My first Webs order. Should I write this on the calendar or something?

Cables are looking good. I would recommend that your plain stockinette in the car be worsted weight; it would have to be for me, but you may very well have graduated to dental floss ;-)

My day is pretty sucky too. Wise move not to bring a complicated project on your long car trip. You can look out the window and enjoy the scenery and knit at the same time. I am so looking foward to seeing the finished cabled sweater! Purty!

Sorry for the comment double dipping! But I just checked the link for your simple sweater porject: Francis Revisited. You'll love it. I had to do extra raglan increases (just increased to the next size up) and I added length to the sweater.

Maybe it's because I suffer from C.R.A.F.T. but I didn't know you spin as well!

Great call on 'Francis', knowing you'll be done before anyone even has to stop to pee!!