I sometimes joke that the only thing I ever inherited from my family is my big butt. That's not entirely accurate: I also got the red hair, and a set of great salt and pepper shakers. But my family has never been wealthy, and most things got used until they just plain wore out. A couple of weeks ago, though, my mother was cleaning out her garage, and I got this. 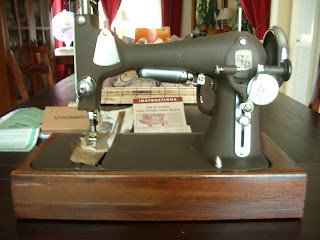 This was my great-grandmother's sewing machine, purchased from Montgomery Ward in the early 1930s. She used it to make clothing and household items for herself and several kids for years and years. Then her daughter (my great-aunt) used it for more years and years. They were frugal people, these women, and they valued what they had. They saved the warranty card and the instruction manual. They kept all the accessories neatly in their original cardboard box. Every single thing that came with this machine is still there. 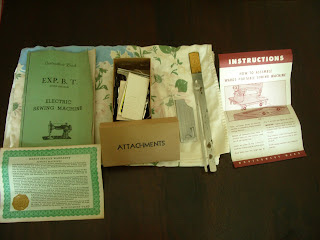 I guess they didn't have the money for a sewing machine case, so my great-aunt made this cover to protect the machine from dust when it wasn't in use, which apparently wasn't very often. 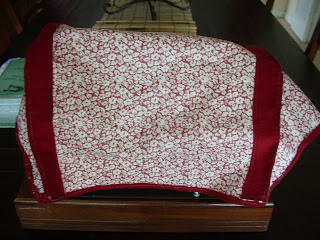 My mother, who spent a fair amount of her childhood in the little house where my great-grandmother, and then her unmarried son and unmarried daughter, spent their entire lives, remembers this sewing machine in almost constant use on its little table in the bedroom my great-grandmother and great-aunt shared until my great-grandmother died. My mother also learned to sew, and made many of her own clothes, and later clothes and toys for her five children as well.

Now it's mine. I have never owned a sewing machine, because of my well-documented adversarial relationship with them. They frighten me. They are noisy and they move too fast. I get spooked by the noise and speed and end up stepping down too hard on the pedal, which causes them to attack, grab the fabric, and viciously chew it up and spit it out. If I am lucky, I manage to get my fingers out of the way in time. I'm usually not lucky.

But I think this time might be different. When I touch this machine, it's like stepping back in time. I feel connected to these women before me: my great-grandmother, my great-aunt, my mother. Three generations of women who used this machine. I am the fourth. Surely something of them must remain in the screws and gears of this machine. Surely their spirits will watch over me and guide my hands when I use it.

So I'm taking the plunge. I have it set up. I've read the manual. I have some scrap fabric. Wish me luck.
Posted by Yarnhog at 8:33 AM

If you know a quilter or sewer, find out if there is a good local repair person in your area. The machine may need a good cleaning and going-over. They don't make 'em like that any more; everything is plastic and crap now.

That said, I feel the same way about my crochet hooks which were my grandmothers' that she'd inherited from many before her. It's a link.

I'm fabulous and scary all at the same time.