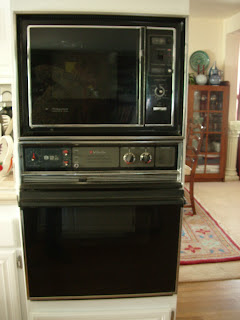 Ordinarily, the death of an appliance is a minor inconvenience, easily remedied by a trip to the local Sears. But in this case, I think a little more is due. You see, my oven, as I discovered when I slid it partway out to measure the opening in the cabinet, was manufactured in 1977.

Do you remember 1977? The bicentennial had just ended. Dittos jeans and Candies were big. "Hippies" were the scandal of the day in conservative suburbia. Teenagers ironed their hair. Billy Carter was a national joke. And I don't know about you, but I was just learning to read. That's how old my oven is. 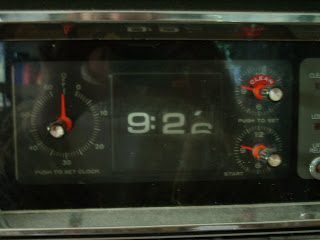 See the digital clock? The kind with the numbers that rotated on little wheels? They were brand new in 1977. The previous summer, we went on our one and only family vacation (to Europe), and my brothers nearly wet themselves with excitement when we saw a digital watch in a shop in Switzerland. This clock died only a few weeks ago, and I saw the writing on the wall then. 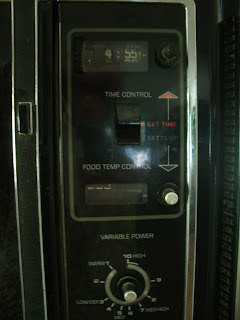 This is the control panel for the microwave. I suspect it may actually be the first-ever microwave. See the digital timer? It has never worked since we've owned this house. You have to stand by the microwave and manually turn it on and off. If you, say, put your coffee cup in it to reheat, and then walk away to water the plants, or answer the phone, or change a diaper, and you forget that your coffee is still in the microwave, it just keeps on merrily cooking away. It never turns off. Eventually, you remember about your coffee, and you tear downstairs and yank open the door, and as soon as the cool air hits the super-heated cup, the cup explodes, spraying ceramic shards and boiling coffee all over the microwave, the floor, and anyone standing in front of the microwave, watching in horror. You'd think that once would be enough to sear that experience into your memory, but I can personally attest to having exploded at least half a dozen coffee cups in exactly this manner.

The other thing that's always disturbed me a little is that, if you're talking on the cordless phone and happen to walk past the microwave while it is running, the static over the phone is deafening. It's amazing we haven't all grown a third ear from radiation exposure. 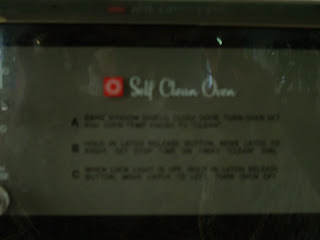 This is a little blurry, but you can still read the instructions for using the self-clean function. Obviously, this was a big deal in 1977--so big that they printed the instructions directly on the front control panel of the oven. See the script? That was high style then, too.

Our house was built in 1977, which, for this part of the world, is old. When we moved in, eight years ago, it was a monument to late-seventies style. Everything in the house was orange and brown. Every room had heavy, formal draperies (even on the showers!) in oversized florals in brown, orange, acid green, and mauve. The ceilings were covered with stained acoustic popcorn. The bathrooms and laundry room were clad in mottled yellow sheet vinyl. The kitchen was completely encased in dark brown wood, except for the mustard yellow tile with the dark brown grout on the counters, and the family room walls were covered with splintered wood paneling. My mother referred to it as "the dog house." But it was in a good location, it was a good size, it had an actual yard, complete with swimming pool, and we could afford it.

Bit by bit, we have replaced and remodeled, and now, there is very little left of 1977. Except the oven. And I find myself wondering about all the life that oven has seen. We are not the first family to live here, or even the second. Judging from the mail I still sometimes get, at least three families lived here before us. How many cups of coffee do you suppose that microwave has heated? How many middle-of-the-night baby bottles? I wonder how many batches of cookies have come out of that oven, and how many serious kitchen-table talks it has witnessed.

By next week, I'll have a shiny, new, stainless-steel oven and microwave with electronic controls and a working clock and timer. I'm told that I won't have to stand by the microwave to turn it off. In fact, I'm told that I won't even have to tell the microwave how long I want it to run, thanks to something called "sensor cooking." And the oven? No exposed heating coil to burn myself on, no knobs of any sort, and the thing cleans itself automatically.

But you know, I just can't imagine that fancy-schmancy oven will still be around thirty years from now.
Posted by Yarnhog at 11:22 AM