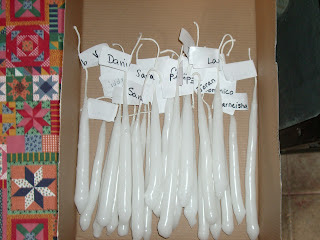 The 4th grade went on a field trip today to a local adobe rancho (a Mexican-era cattle ranch). As usual, I went along. Now, when faced with the prospect of an outdoor field trip in March, when the weathercasters have been predicting colder-than-usual temps and heavy rain, the prudent knitter with a whole closet full of knitted items and more yarn than she can possibly justify to anyone not similarly obsessed, might consider taking along some sort of warm, soft, insulating garment, like, maybe A SWEATER! Take it from me, a t-shirt and windbreaker have very limited insulating power.

Somewhere around the second hour, while attempting to string tooled-leather medallions onto plastic cord and then knot said cord to form souvenir necklaces for a long line of fourth graders, I discovered that most of the feeling had left my fingers. I finished tying the cords with my chin and the heel of one hand.

About the middle of the second hour, while trying to re-knot said cords after the original knots had sprung loose from the slippery plastic and the souvenir necklaces were dropping like breadcrumbs marking our path as we toured the rancho, I discovered my hands were now completely numb. Not to worry: I still had teeth.

By the third hour, while I was attempting to affix sticky labels with the kids' names to the waxy wicks of their hand-dipped candles, I realized that the shaking I was experiencing was not, in fact, a small earthquake, but my own shivering as my body fought off frostbite.

By the time we got back to the bus, the shivering had stopped. I think. I don't remember clearly, but I seem to recall talking to Kermit the Frog. Only he was purple. Or maybe it was Ghandi. I think I may have been delirious.

When I finally got home, I put on two sweaters and gulped a huge mug of tea, then huddled on the sofa with two large dogs. Two hours later, I still hadn't warmed up appreciably. I finally bit the bullet and jumped in a hot shower (I'd have taken a bath, but the only tub in the house is in the kids' bathroom, and that would have meant a whole lot of scrubbing before I was willing to get into the tub). Now, I'm not a big person, and my husband, who's bigger than I am, insists that he never has this problem, but I cannot keep both my front and back warm in the shower. If I face the shower, my back is cold; if I face away, my front is cold. After ten minutes of spinning like a top, vainly trying to keep all of me warm at the same time, I got out of the shower, put on all my clothes, including the two sweaters, dug out the electric heating pad, and huddled once more on the sofa with the two large dogs. And there I remain. If this doesn't work, I think I'll just light my feet on fire.
Posted by Yarnhog at 2:40 PM

Aw man, I loved making dipped candles as a kid! Good luck warming up- I got a tiny shiver just reading your post!

O.My.Stars. I SO feel for you! But as someone who gives tours to 4th graders (inside a nice warm Museum) I almost fell off the couch reading your great description of the field trip! I'm sure they didn't even notice the weather. Now then -- if you're still cold (that was days ago, but it could happen) here's an old Minnesota remedy: hot lemonade with honey. Good for colds and it warms you right up. Or very hot water with maple syrup til it's the color of tea (that's a Wisconsin one and works immediately). (I'm a new reader and I think I love you like a granddaughter!)