My mom and I had a little adventure today.  The frog is my sister Cheryl's symbol, so today we went and got frog tattoos in her honor.  :) 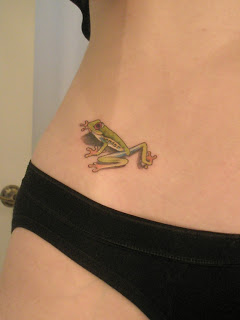 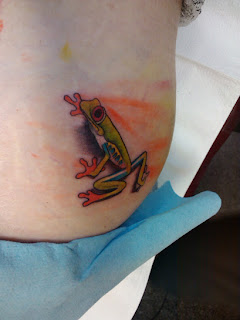 I want to share the tattoo story, because it was really cool.

I’ve never had a tattoo, or even considered it. Ditto my mom. So when we decided to get tattoos, I had to find somewhere to go. We live in San Diego--a navy town--so there are about a thousand places. I did my research online and called the highest-rated place. I called and talked to some random guy, Dave, who worked there, and we went in.

While he was setting up, Dave asked why we were doing it, and I told him, “My sister is really sick, and the frog is her symbol.” He asked if she had cancer, so I explained what happened. And then he said, “Almost the exact same thing happened to my mom.” When she was 48 (same age as Cheryl), he went by her house and found her on the floor. At the hospital, they found she had a massive brain tumor and had had a stroke. She was also really fit and healthy and it came out of nowhere. He was her only child, like Joe is to Cheryl, and they were really close. He nursed her for almost a year before she passed away.

And six months ago, his lifelong best friend died of a brain tumor. He nursed him all through his last months, too, since he had no family.

So, as you can imagine, we all had a long, deep talk about cancer and life and death and what it all means and what’s important all through the tattooing. He told us about some of the other people he’s tattooed--often several members of the same family--who have done it in honor of a family member. He says he’s done hundreds of tattoos for people like us, and that they just seem to show up. The other tattoo artists he knows rarely have people ask for that sort of tattoo. He told me, when his mom was sick, his aunt told him the reason he was going through it was so he could help other people deal with the same sort of tragedies. At the time, he thought that was stupid. But in the 17 years since his mom died, people just keep showing up with the same stories and asking him for tattoos.

I honestly felt like the conversation, the stories of all the people we talked about, and what it all means, was getting tattooed onto my skin as we were talking. Maybe it sounds crazy, but it was an intensely meaningful experience for me, and I think for my mom as well. I’m so glad we ended up meeting Dave!
Posted by Yarnhog at 12:15 PM

What a beautiful story! I have been sending positive thoughts towards you and your sister.....

What an amazing story! Great tatoo.

Although I do not know you, at the moment, you and your family are often in my thoughts. I wish for a miracle every day.

In the Druid Animal Oracle, the frog is a symbol of healing - physical, but also healing the heart and soul. Your tattoo is beautiful. I love that your mom got one, too.

Beautiful, the story and the tattoo. My thoughts are with you x

sorry about all the deletes, my computer was being stupid. But I totally loved the story!

That is a unique and beautiful story.

I love the frog tattoo. It was to be that you met David, it seems. Best wishes to all.

Thanks for sharing the story. And the frog tattoos are so cool.