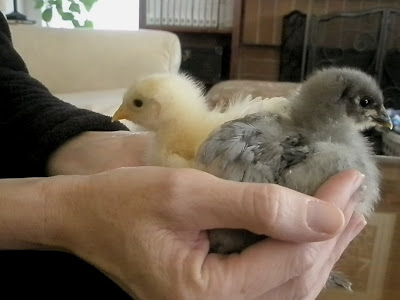 And today they graduated from kindergarten (the brooder) to an outside pen in the grass: 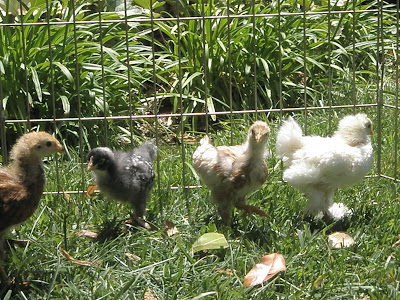 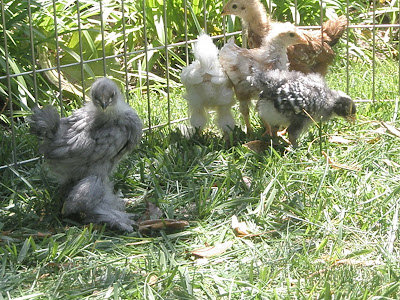 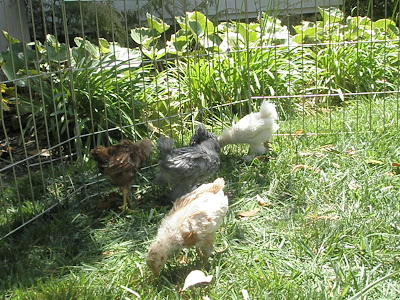 "Ooooo...there are crunchy things in here!  They wiggle when you eat them!  Nom nom nom!"

After a couple of hours, they started getting cold, so I put them back in the brooder to warm up.  All the fresh air seemed to really stimulate their little appetites and they were trampling each other to get to the feeder.  Did I mention their names are Marge (the blue cochin), Lisa (the yellow cochin), Maggie (the runty barred rock), Patty (the enormous and possibly male rhode island red), and Selma (the golden sex-link who follows Patty everywhere)?

It won't be long before they are ready for new digs, so it's a good thing I finally got the coop painted and installed: 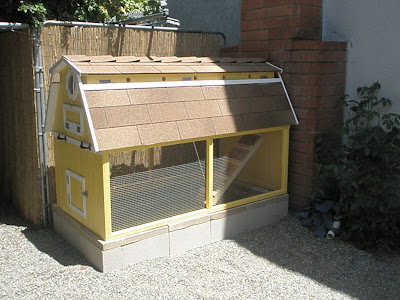 I think it's awfully cute.  I bought it from a local woman who builds them.  I painted it egg yolk yellow with white trim, just because.  I set it on a foundation of cinder blocks on top of doubled chicken wire to try to keep the rats out. 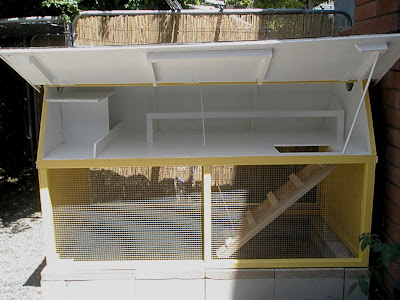 The top opens to reveal the "bedroom".  There are two laying boxes on the left, a roost most of the way across, and a ladder down to the lower area, which has a bed of clean sand for scratching and dust bathing. 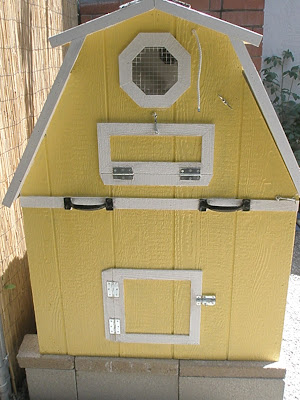 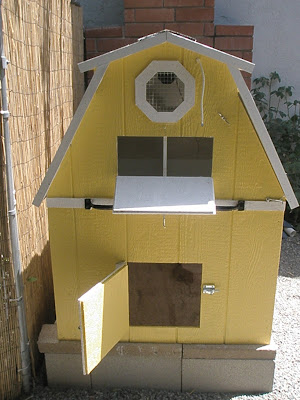 In another week or so, the girls will be old enough to move out here at night and free-range in the backyard during the day.  And in another four months or so...fresh eggs!

Love your chicken coop....we really want to get some chicks but I worry our dogs will go nuts day and night.

On another note, I've been catching up with blogs and I hope you are doing okay. I'm so truly sorry about your sister, and I wish I had some words of wisdom but words fail. Sending good thoughts your way.

Omg! The coop is soooo cute! Love the "egg" color. Your girls should be very, very happy here. Great job!

At first I thought your cockatiels had had babies.... How are Peanut and Daisy? Do they still live with you? I, too, wonder how your sister is doing.

Based on your chickens' name, I deduce you have a son of TV-watching age. (Not that I remembered that or anything.) What an adorable coop!

Do you read Erika's blog (http://redshirtknitting.com/)? She has a mini-flock about the same size as yours and blogs about them occasionally.