It Ain't Just a River in Egypt 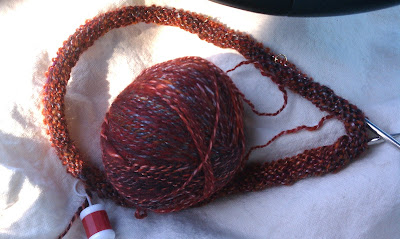 This is the progress I've made on my happy knitting.

What's that you say? Smaller than in the last picture? Ah, but that's only because you didn't see the part where I finished the whole raglan, separated out the sleeves, and tried it on. And it was too short. Way too short. Which I knew it was going to be several inches earlier. Not suspected, not feared: knew.

So I knitted for a while. And it was pretty clear pretty early on that I was increasing at a rate that was going to get all my increases done well before the raglan was deep enough. But I thought, "Eh," and kept knitting.

When I had only two increase rounds to go, reality began to assert itself a little more forcefully, as I realized that the only person this raglan was going to fit would be someone under three feet tall. So for the last two increases, I increased every fourth round. Because surely that would make up for the entire rest of the raglan and magically add three inches, right?

Inexplicably, it didn't. But, hey, I'm a knitter. I can make it work. I continued to knit without increasing for an inch or two, until my raglan line stared to morph into something less identifiable and even I had to admit that it didn't look quite, um, right. At that point, I decided it was probably good enough, separated out the sleeves, and tried it on.

Yeah. Nothing like a fit test for a reality check.

I momentarily considered possible work arounds involving steeking and grafting and messing with the space-time continuum, and then I finally bowed to the inevitable and ripped. Hard.

It's a good thing I like the yarn, because it looks like we're going to be spending a lot more time together than I initially planned.
Posted by Yarnhog at 7:04 PM

Yup. I work the same way with denial...glad you like your yarn!

Been there, done that, enjoyed the view while it lasted.

You mean I am not the only one who this this kind of thing?

I hate when that happens.