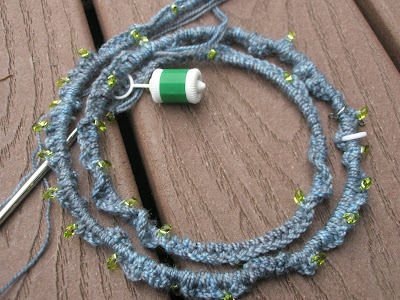 I started winding the yarn for Enchanted Wood last night, but I couldn't resist jumping ahead to the cast on. Which took three hours. 375 stitches, double-stranded lace cast on, working with two ends of the ball and using beads. None of these things caused me any trouble. So why did it take three hours? Apparently I need to return to kindergarten for a little brush up of my counting skills. The cast on was mostly just "cast on ten, place bead, repeat." Alas, mine was more like, "Cast on ten, place bead, cast on...wait, how many was that? Is this bead before or after that stitch? Uh, oh. I must have messed up back here. Rip, rip, rip. Cast on ten, place bead, cast on ten, place bead, cast on ten...why don't I have the right number of stitches? Let's see...ten...nine...or is that ten? Where is this bead supposed to be? Is that one stitch or two? Damn it! Where are my glasses?" And so on and so forth. But I did get the cast on finished and--wisely, I think--stopped there. I'm hoping I've gotten the stupids out of my system now and the rest of this will just jump off my needles. Hey, a girl can dream, right?
Posted by Yarnhog at 3:48 PM

Casting on and counting a high stitch count is the only part I don't enjoy about knitting... I'd even rather finish ends (well, don't enjoy that either but at least then I'm almost done).
Happy Knitting!

It's like you channeled my brain with the counting trouble! But the cast on looks really beautiful, even if it was a hot mess of counting to get it done.

Ouch. Can you say perimenopausal? Welcome to the club.

cant wait to see it as it progresses..