FO: Not So Sahara 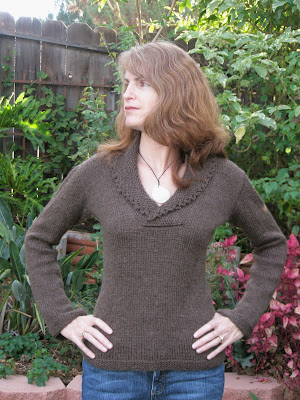 Pattern: Sahara from stitchdiva, sort of. I modified it to work with a heavier weight yarn and to create a shallower, shawl collar, and to have narrower sleeves and a different trim. But the basic shape is pretty much the same.

Yarn: Cascade Ecological Wool in Chocolate, just over two skeins. This is a satisfying yarn. It's "minimally processed" and undyed, so it's still pretty woolly, but there was no vegetable matter and not much lanolin, as far as I could tell. It didn't smell particularly sheepy, either. But when I put the finished sweater in to soak, the water turned very brown. I thought, "Oh, look, the dye is running." And then I realized it's not dyed yarn. Ugh. I washed it four times before the water was finally clear. The finished sweater is also lighter in color. Amazing what washing out the dirt will do. The yarn is fairly soft even in the skein, and softens and drapes more after washing, but it's not what I would consider next-to-the-skin soft, although I am an acknowledged wool wimp and there are probably plenty of people who wouldn't be bothered by it. 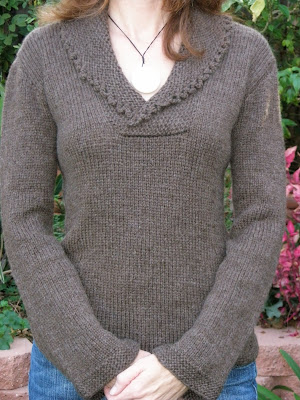 Thoughts: I intended this to be a very basic, throw-on winter sweater, and I think it fits the bill admirably. I did add a tiny bit of fussiness by crocheting a little edging around the collar. I don't think it's my favorite sweater ever, but I do think it will get more wear than most of my sweaters, just because of its simplicity. I am a lazy dresser. My more impressive and dramatic knits always seem to demand more of an effort than I am willing to expend; it's the simple ones I reach for over and over again. Sounds like there might be a lesson in there, somewhere...
Posted by Yarnhog at 5:13 PM

Labels: eco wool, not so sahara, Sahara, top down

Lovely. The collar is terrific and the color is one that will go with everything.

AND I love love love this Not So Sahara!! All last winter I wanted to knit a sweater that looks just like that but couldn't find exactly what I wanted... I think I may need to steal your idea.

I too, love the collar. It just the right amount of fussiness. I am so jealous of how much knitting you get done. Since I can't knit as much as I would like, I live vicariously through you. I can't wait to see what is next.

I just love how the yarn looks when knit up! Another beautiful FO. (You must be having cooler weather...at least cool enough to model a wool sweater, lol)

Wow, four washes? I'm glad it turned out soft and clean. You made another great sweater. I'd like to see you knitting closet.

Wow I didn't realize that dirt was a new thing to worry about--gah!! This looks great on you, such a great sweater.

every time you knit something that I think I' m going to copy, you finish it and start something else I want to copy.

Great job! It's so well fitted to you, and yes, I think this will be a frequent part of your 'winter' wardrobe. The crochet edging is a lovely touch.

That looks nice and warm. I like the detail on the collar.

This is so well done, elegant neckline detail.

Love it! I'm a 'wool wimp' like you so I really appreciate your comments on how soft yarn is! Great job!

Excellent sweater. That is definitely one you will reach for whenever it is chilly.

Very pretty. Love the added touch on the collar!

Beautiful. I'd love one myself but since I am not only a lazy dresser but a lazy knitter, it's not likely to happen. Darn. I keep hoping that one of these days the KG will bop me with her magic needles and I'll suddenly become SuperKnitter! (ta-da!) and start whipping out all sorts of wonderful sweaters. Of course I also cherish the vain hope that my teenagers will spontaneously clean the house one day. What can I say, I'm a dreamer!

It's beautiful and fits you so well! I saw this yarn at a LYS once and thought it looked pretty natural too. Does it feel rough though?

I really like this one! The little bit of crochet edge around the collar is a really nice touch!

I love how it turned out! The collar is really nice -- it adds just the right touch of lightness and femininity.

I am deeply in love with that collar! Awesome simple classic sweater. I hear you on the Not So Sahara thing; it's like my Not Cropped Cardigan which started off based on the Cropped Cardi pattern but modified so much it's a different sweater. That's gross about the dirty wash water. Ick