I have an idea for my next sweater project. Well, actually, it will be the sweater after next, since I owe my husband a cashmere sweater. Plain stockinette. Crew neck. Black. Sportweight. Yeah, I'm really looking forward to that.

But after that, I have an idea for a new project. Have you seen these? They are the Shibui Transitions gloves. I'd love to paste a picture here, but I don't want to steal anyone else's picture, so this is a Ravelry link.

Oh, okay. Here is a little picture from shibuiknits.com: 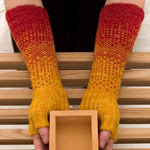 I fell in love with this design instantly. I love the way the color shifts from top to bottom (this is done with two solid colors, using fair isle colorwork). But I have no real use for fingerless gloves, and as we all know, I have a small sweater addiction I just can't shake. Still, this concept has been kicking around in my subconscious for a while.

A few weeks ago, I scored some Malabrigo Silky Merino in a Ravelry destash. I had been wanting to get my hands on some, and none of the yarn shops within driving distance carry it. So when I saw someone destashing four skeins for about half the retail price, I jumped on it, even thought the color was Cloudy Sky, a greyish-blue that I would never choose for myself: 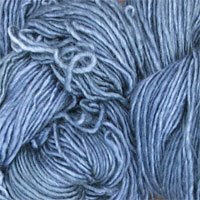 With the exception of blue jeans, or the occasional navy power suit, I don't wear blue. I have red hair and olive green eyes, and blue isn't really my color. But the yarn...oh, the yarn! It is amazingly soft. Buttery soft. The sort of soft that makes you want to roll around naked with it. Or, um, maybe that's just me. But you get the idea.

Sadly, four skeins is not enough to make a sweater, even if I wanted a blue sweater. It is enough for a lace shawl, but I think we've beat that dead horse enough. So I've been waiting patiently for inspiration to strike.

I was checking the Ravelry destash pages today and found another knitter destashing eight skeins of Silky Merino for a very good price, this time in Redwood Bark, which appears to be a dark, reddish brown. Here's the picture from malabrigoyarns.com: 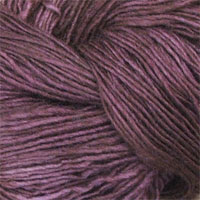 The pictures I've seen on Ravelry are much redder than this, so I suspect this is not a terribly accurate shot. But the basic idea works: four skeins of grey-blue + eight skeins of red-brown = one transitions sweater.

I'm thinking I'll base the shape on the Opulent Raglan. I wear mine all the time, probably more than any of my other sweaters. I love the deep, square neckline, and the elbow-length sleeves are not only surprisingly comfortable, but also much cooler than full-length sleeves--which is important when summer extends into December. So I think this will be a longish, fitted sweater with a deep, square neckline and elbow-length sleeves. The color will transition from blue to brown (or brown to blue; I haven't decided) somewhere around the midriff. I've never tried fair isle before, but I don't imagine it will be too difficult, especially with only two colors.

Did anyone else hear the KG laughing? No? Must have been my imagination.
Posted by Yarnhog at 7:00 AM

You'll be fine. KG is hanging out on the east coast.

Send me the yarn and the pattern specs and I'll be happy to knit mindlessly with a sweater's worth of cashmere. That is like a birthday party to my knitting hands.

I too am fascinated with color transitions like that. There are a couple floating around in my head even as I type. Your sweater sounds great (not the black one)!

Brilliant idea! And Becky is right. KG is hanging out in her neck of the woods so you're safe for a little while.

Oh wow this might be your biggest knitting coup yet! Can't wait for all the deets...

And I thought I wasn't a blue person either but whenever I wear it I get major compliments:)

Heck I was going to offer you the use of one of my knitting machines. Anything plain stockinette, I whip it onto the machine because I get too bored with the stockinette.

Can't wait to see how they turn out!

Love the sweater from your last post....looks beautiful!

Sounds like a lovely project! DH has recently commented that he hasn't seen the last 2 sweaters I promised him. Sigh. There's a lovely and quick pattern in the newest IWK and I just happen to have enough in a DB aran, a green that will look great on him. I hope he'll like it.

The designer of the Transition mitts is a friend of mine, so should you get stuck I totally have a lifeline! But since we watched you tenaciously hang in there this year with projects that drove you crazy *ahem Sligo sweater ahem*, I know there's nothing you can't figure out.

My verification word was "slywar". That was just too bizarre not to mention.

Must be my display, because the redwood bark looks purplish on my screen. Either way, that's a great idea. Just remember that stranded knitting gives you an extra layer and I know how warm SoCal can get.

I love the idea of color transitions! Good for you for staying focused, looking for more yarn for your project! I'd love to see what you come up with!

Those gloves and the yarn are awesome!

Wonder if you went shopping and bought a plain black sweater and just took all tags out if he'd notice? LOL