So Silver Belle was a grave disappointment. I am still planning to make it, but I'm debating whether to use the same yarn and rework the pattern, or use a light worsted/dk weight and knit the size small. I found someone on Ravelry who is my size and who successfully made one, but she did the small and took out two cable repeats. I say again, what is wrong with this pattern?

Let's not dwell on that now, though. I have another project to share. I'm a little reluctant to even show you this one, because it seems to be flying under the Knitting Goddess's radar and I don't want to jinx it. It's going so nicely, though (knock on wood), that I couldn't resist. 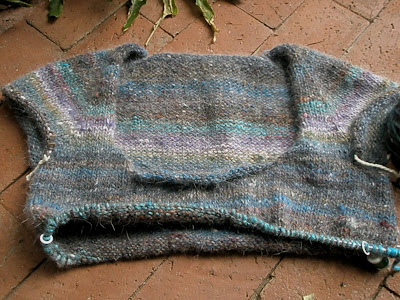 This is my Kochoran Scoop, so named for the Noro yarn (oh, angora fuzz, how I love thee!) and the deep scoop neck. It was inspired by Kolsva, which is a Cornelia Tuttle Hamilton design using Kochoran. In fact, I bought the pattern book intending to make Kolsva. I like the simple, fitted shape and deep scoop neck. But I don't like the saggy cowl and I don't really want to knit it in pieces and sew it up, because, you know, I'm really loving the top-down, one-piece knits these days. And then, the original is really too short, and I want long sleeves, and...

So, in a small fit of pique after ripping Deep Purple, I wound up some skeins of Kochoran I had in the stash (I think I got this from The A.D.D. Knitter in a destash a few months ago--thanks, Heather!), and without benefit of pattern, plan, or calculator, I cast on with reckless abandon.

And wouldn't you know, it fits perfectly and I haven't ripped once.

Considering the fates of some of my recent, carefully-considered, well-thought out, agonizingly- planned projects (what round yoke jacket?), I'm not sure whether to be happy or annoyed. I've decided to go with "happy" for the time being. 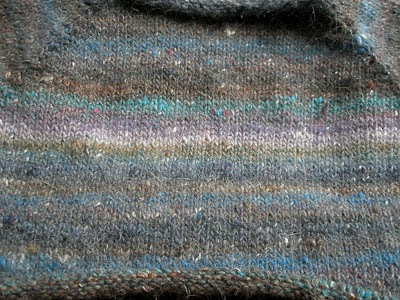 Because, really, what's not to love?
Posted by Yarnhog at 1:36 PM

Ah, it's lovely! I have enough Kochoran in the stash for a couple of scarves. I would love to have a whole sweater in it!

We should start a group on Ravelry of "people who have gotten A.D.D.'s destashed yarn."

So sorry about the Silver Belle. I have my own problems with a Debbie Bliss pattern. I just posted an excerpt from the pattern to see if someone could help decipher it, so frustrating.

Your new project looks great. Can't wait to see it!

I *think* you are channeling Elizabeth Zimmerman, which is never a bad thing. Knit on, etc!

People say i knit a lot and fast, which I don't, but you certainly seem to. The colours of this fill my eye.

Sometimes no plan is the best plan... may you continue to fly under the radar!

Thanks for the help! I frogged last night after work and immediately started again. Now I'm about 7 inches away from finishing the body!

I've never knitted with Noro before, but that yarn looks beautiful! Does it automatically self-stripe?

Nice to know there's some balance in your knitting karma. The Yarn Goddesses sometimes send painful messages about our projects that just shouldn't become FOs. I've had a few that bounced off the opposite wall before being recycled back into the stash. The new top looks great!

And again I say....would you please, please, pretty please with yarn on top knit for me? The things I knit never even look that good in my head, let alone on the needles. Sigh.

Noro makes everything better. Kochoran is jsut so so lovely. Enjoy this knit. I agree with kmkat that you're channeling EZ.

wow, you've been busy in my absence. love all your lovely knit goodies. the sahara is definitely much improved. you are always so inspirational that way!