Ripping My Heart Out 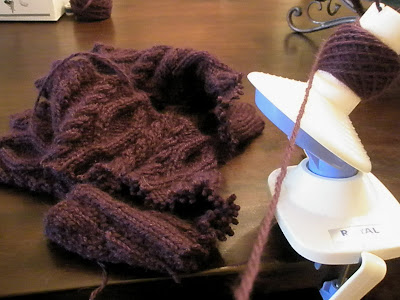 I did it. Fast, like a bandaid, so it wouldn't hurt. It did anyway.

Thank you all for the advice and support. I did email Cynthia (from the comments), only to discover that her peplum, which she thought was too big, was smaller than mine. By a lot.

Still, wanting to be sure, I took Deep Purple with me to my knitting group this morning, to get an unbiased opinion from knitters not emotionally invested in the project. They laughed. Out loud. It was suggested that it might make a good table skirt.

And in case you're still not convinced, I decided mid-rip that I really ought to lay it out flat and measure the thing, since it was off the needles anyway. 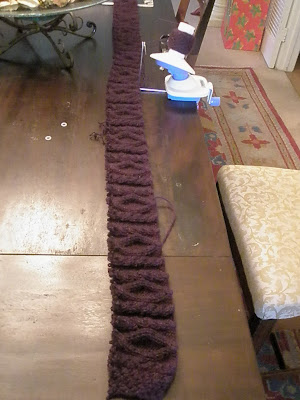 My dining room table seats eight comfortably; ten in a pinch. I could always use it as a table runner, I suppose. 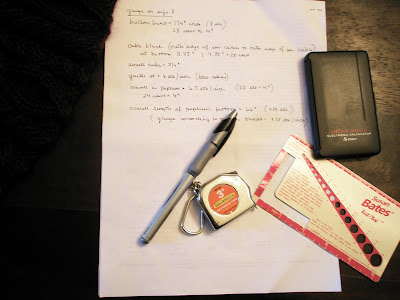 I did, at least, think to take complete measurements of every part of the peplum before I ripped. I measured and noted and calculated. So I guess you could say I just made the world's largest gauge swatch.

I also discovered source of the problem. As I mentioned before, the gauge for the peplum is not given in the pattern, nor is the finished measurement of the bottom of the peplum. But there is a measurement on the schematic (in the wrong place, but there all the same) for the top of the peplum, where it joins the bodice. There is also a stitch count for the top of the peplum. If I were the sort of person who thought ahead in this way, I could have figured out the gauge for the peplum by comparing those two numbers before starting to knit. As I am not that sort of person, I only discovered this connection today. Taking those two numbers, the required gauge for the peplum works out to 7.88 stitches to the inch. This is in aran weight yarn. My gauge for the peplum in aran weight yarn on size 6 needles is 6.5 stitches to the inch. Over 428 stitches, that is a difference of 11.5 inches. Even if I had made the size small to begin with, there is no way my gauge would have given me a finished product that corresponded to the actual or perceived size of my body.

So the next time you wonder if gauge really matters, the answer is a resounding YES!

But I am a little miffed by the whole experience. The pattern, to be honest, sucks. I know; I don't like to criticize other people's creative work, either, but if I had paid for this, I would be royally peeved. (For those who don't know, this was a Vogue Knitting "cover pattern" bonus from their anniversary issue, and is available as a free download from the VK website.) But this pattern is a Debbie Bliss design, which I understand is a reprint from one of her books. If I had paid for a pattern book to get this, I would be outraged. The only gauge given is for the seed stitch part of the bodice, the schematic does not show measurements for several important parts, and some of the measurements that are given are clearly incorrect. But what really confuses me is how anyone could ever get the required gauge with aran weight yarn. 20 stitches and 30 rows in seed stitch is almost doable (although I had to use a size 5 needle to get close), but nearly 8 stitches to the inch for the cable section? Most of the successful finished projects I've seen on Ravelry used worsted weight yarn or lighter, not aran. And most of those were modified to make them smaller. So I am baffled as to what the designer had in mind with this one. 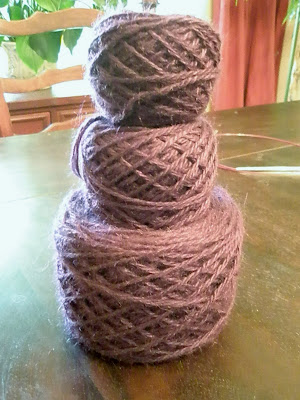 Gauge can be a major PITA (pain in the A**). I made a vest for DH and doing the gauge swatch in stockinette didn't make sense to me with an allover pattern, so I made and followed the pattern gauge swatch. Ahem. It was 9in too big. FROG pond! Learning experience, yah!

I feel your pain, as they say, and it is lovely yarn.

YIkes. I found the measurements given on the schematic confusing as well. On a positive note, just think how much faster the knitting will go the second time around with much fewer sts. The purple is still looking lovely.

i'm really sorry about this :-(...i know what it feels like to work on something for so long and feel so passionate about it only to rip it...in fact, that's probably going to be the fate of my notting hill

on the bright side, maybe your "free yarn" can be put towards a different project and be something really spectacular!

While I empathize with your ripping, the actual length of that sweater is CRACKIN' ME UP!!!

Reading this, I flinched. But it had to be done.

Ouch. I feel your pain. Still, better to end the denial now than finish the sweater only to find out you could donate it to Sea World for their sick wales. Reminds me of the beret I did that could double as a toilette seat cover. It was so bad, it was funny (in a lughing through your tears sort of way).

Oh man, it was rough just reading the post...I would have been majorly cranky if I were you. Are you planning to give the whole project a permanent time out?

Oh no, that is so disheartening. Are you still going to knit it up or are you done?

Oh my lord, that pattern sounds like a nightmare. Your critique of the pattern is entirely justified and logical. You could have bound off the giant huge peplum and called it a scarf. Now you are free and the yarn is free!

I'd be tempted to take all that lovely yarn and wed it to a Nora Gaughan pattern, or maybe the Riding to Avalon hoodie (which would look smashing on you.) Who needs a darn peplum anyway....

I was cringing as I saw that yarn on the ball winder. At least you can say you realized it wouldn't fit well BEFORE you finished!

I knit a Debbie Bliss pattern years ago that gave me a lot of trouble even though I was getting gauge. If I remember there was no schematic at all too. I swore I would never make another one of her patterns afterward and to date still haven't.

One reason why I make up my own designs. Patterns are often difficult to say the least, especially those written line by line. Give me a chart any day. And a shape with correct measurements on.

I share your outrage, this is exactly what happened to me! I fiddles around with it and was making the smallest size on a smaller needle (for my extra large body) and it was still huge. Waste of time, much?!!!

I read on another blog about Bliss' patterns being hard to decipher and kinda a rerun of her other patterns. I only have one of her books from a long time ago and its kids patterns and I didnt like the way the patterns were written either.

i have a quick question...i finished the waist shaping part of the opulent raglan, but i'm not sure if i did it correctly...it is incredibly shaped on one side, but not shaped at all on the other side...i think this might have been due to the pattern where i started with the first dec round, it says to "k1, k2 tog, k until 3 sts before next side marker, dec blah blah blah"...well i interpreted the "next side marker" to be the marker that was only a few stitches away when i start the round, therefore after one round, it's 3 stitches decreased around there, and 1 stitch decreased near the end of round, and thus all decreases are on one side...did i do it wrong?...was i supposed to interpret "next side marker" as the one on the other side? thanks!

that stinks!
The yarn is pretty though.

I hate when that happens...

I'm about to frog 1100 yds of unworn sweater. You've made me brave.