Sahara was a peculiar project for me. I loved knitting it. The pattern was wonderful and the yarn, Lorna's Laces Shepherd Worsted, is my all-time favorite. But the end result did not please me at all. The variegated yarn did what variegated yarns so often do and looked completely different in the finished project than in the skein. I also tried to skimp on the yarn (because, folks, this is not cheap yarn), and ran out while the sleeves were still quite a bit shorter than I wanted. All in all, I ended up with a fairly pricey sweater that I knew I would never wear. Here is the "Before": 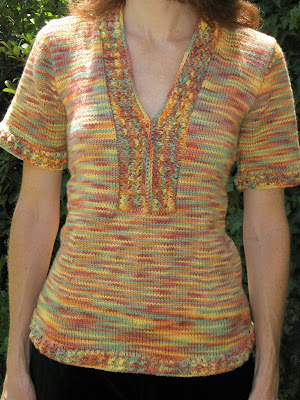 After the rather painful crash and burn that is the Round Yoke Jacket, I needed a win. I found someone on Ravelry who had a skein of the same yarn I used for Sahara and talked her into selling it to me (by the simple expedient of offering money). When it arrived, I divided it into two equal balls. Then I took out the bind off on the short sleeves of my Sahara, put the live stitches back on the needles (oh, how I love top-down knits!), and worked until the sleeves were the length I wanted. (Dividing the skein up front allowed me to work each sleeve to length without having to worry about running out of yarn for the other sleeve.) 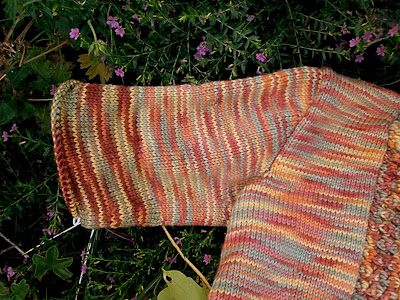 The colors did not match. Not even close. The new skein was much darker. And it pooled something fierce. But I wasn't worried about any of that, because I had already decided the only thing that would save this sweater for me was overdyeing it. I did this once before, with a beautiful angora that was originally dyed an inexplicably unfortunate combination of orange and purple. In that case, I tried to dye it black, but it turned out more of a heathered sable color. Unexpected, but very pretty.

This time, I decided to try for a warm brown. Because the original colors were red, green, orange, and yellow, I was kind of limited in my color choices. I figured red would turn to brown when it hit green, green would turn to brown when it hit red, and orange wouldn't work with much of anything. So brown seemed reasonable. When I got to the grocery store (yes, I used RIT dye from the grocery--I was too impatient to order real dye), I saw a bottle of scarlet dye next to the brown and thought, hmmm, a reddish brown would be nice, so I grabbed a bottle of that, too. 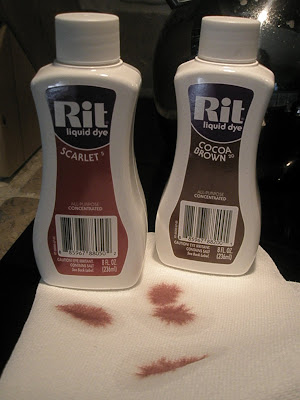 I mixed up the dye bath using the very scientific approach of adding about half of the brown dye and a couple glugs of the red dye to a half a large pot of water. [Please note, though: I seriously underestimated the dominance of the red dye. My dye turned out much more red than I intended, even after I added the rest of the bottle of brown to the dye bath. Just for your information, should you choose this approach.] I soaked the sweater in warm water, brought the dye bath to about the same temperature, then transferred the sweater to the dye bath and simmered it for about an hour, stirring (gently) every few minutes. This yarn is superwash wool, so felting wasn't too much of an issue, but I used the same method when I overdyed my angora sweater, and it didn't felt either. I think the key is not changing temperatures dramatically and not agitating the sweater any more than you can avoid. 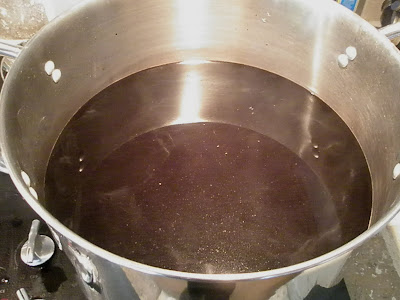 Once the dyeing was done, I let the dye bath cool a bit, then transferred the sweater into a dish pan and began rinsing it, beginning with hot water and slowly reducing the temperature with each rinse. It took a LOT of rinsing. More than a lot. [Note: Wear gloves. Repeat: WEAR GLOVES.] The drawback to using RIT dye is that it is a multi-purpose dye, meaning it actually contains two different types of dye to address different types of fabric. Only one of the dyes adheres to wool, so the other one just sits on the surface of the fabric and must be rinsed out. I also used far more dye than I needed to, just to be sure it would fully cover the original colors.

Several hours of soaking and rinsing later, I put the sweater in a gentle spin cycle in the washer, and then tumbled it in the dryer until it was damp. I find that superwash wool stretches like mad when you wash it, and a short trip through the dryer really helps to set it right. I laid it flat to finish drying, and that was it! Here is the finished Sahara Revisited: 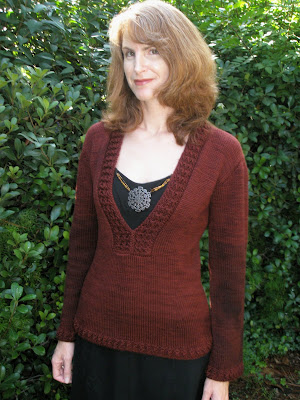 (Yes, that's a little excess dye that still needs rinsing out on the sleeve.)

I am thrilled with the results. This one went from a sweater I would never have worn to one that I will use often. In fact, I think I am going to cast on for another Sahara next!
Posted by Yarnhog at 8:00 AM

The final color is beautiful! I love your scientific dyeing method. Very similar to my own "wing-it" method!

That came out really pretty. You lucked out!!

OH MY! What a great revival story! And what a difference. I'm planning the same strategy to some bright white knits that would get more all-season wear in a new colour, thanks for the step-by step info and tips. That shade you created looks great on you - so much nicer than the original!

You are the overdyeing master! It looks fabulous, and I love the new color.

You never stop to amaze me. I'd be too chicken to step to such drastic measures.

Stunning! That was a great idea, and perfect color "choice."

Lovely! Brava for a job well done and retrieved from the I'll-never-wear-it drawer. You've given me some encouragement to try Rit dyes myself.

Oh my goodness, that color is GORGEOUS!

WOW!! I really liked the original colors until I saw the finished product. Love the flared sleeves too. Did you change the neckline too?

Good idea to dye it! The new color looks great! Glad you didn't have to frog the project because you hated the end results.

WOW. I almost want to accuse you of swapping out sweaters :). That is fantastic. You have totally opened my eyes to more possibilites with yarn color. Thanks!

Wow! You are a genius! I can't get over the transformation. Thanks for explaining the process too. I may give that a try on one of my sweaters. I guess if I'm not wearing it, I'm not risking much.

nice... I like the new color! I have a sweaters worth of yarn in a color I hate.... I think I need to dye it too

That's AMAZING!!! You did a fantastic job with the color and I am so impressed that you are brave enough to do it. Many people aren't and would have just lived with it.

Just a quick note, one of the reasons you spent an eternity at the sink rinsing is because of the red. When I dye fabrics I pretty much commit to turning my skin puckered when I do my reds. That color bleeds like crazy and takes an amazing amount of time to get the excess out. So be careful when you wash it again, it most likely will bleed a little time each time you do. Keep it away from your pretty white sweaters!

Wow, that looks great! The color came out fantastic!

Wow! That looks fabulous! What a great sweater for Autumn.

Gosh! What a rescue. Excellent!

Beautiful! I like the new color much, much more than the old one. It's lovely on you, too. Wear it with pride!

it's gorgeous! you're so good at whipping out all these FOs! i love burgundy, it's one of my favorite colors...plus i think this shade really brings out the front neckline and the edgings :-)

btw, i casted on for opulent raglan last night and managed to get to the part where i joined the body...it says to go for 19 rounds, but i wonder if you had lengthend it after the 19 rounds due to the smaller row gauge, and thus not reaching past the bust yet...it took me forever to get a swatch gauge of 19 stitches and 25 rows

DAMN!!! What a an amazing transformation! I love the new overdyed Sahara. Great job.

What a wonderful save! I adore the final colour, and the subtle varigation it has. And what great timing - sweater weather is approaching rapidly! :)

Perfect! That really did save the sweater...the new color is awesome, and I swear the detail on the collar went from "wha?" to "wow".

Ha! I love your dye method -- it is exactly what I would do. Great end result. Again, congrats!

I'm sooo behind on your blog!! I love the sweater, it came out great! A total transformation.