I was trying to think of something interesting to post for this contest at Life With.... The idea is to post a picture of one of your collections. The problem is, I don't really collect anything. I don't like clutter and I've never really seen the point of having stuff just to, you know, have it. My stuff is all stuff I use, or have used, or think I might use (despite what my husband says), and so not particularly interesting or decorative. I do have a lot of books (one person's "a lot" is another's "not nearly enough"; by "a lot" I mean I have full bookcases in almost every room, and more books under the beds and in baskets and boxes and stacked on the backs of the toilets...what can I say? There's a reason I majored in literature, and it wasn't because lit grads are so well-paid.) But I don't consider my books to be a collection. They're not nice copies or first editions or anything. They're mostly paperbacks and many of them are falling apart because they've been read so many times. I am a firm believer in re-reading. I always get something new out of a book each time I read it, and re-reading a book for the fourth or fifth time is like visiting a favorite vacation spot.

I thought about posting a picture of my younger son's Lego collection, which is truly impressive. There's nothing like Lego kits for an obsessive kid with strong perfectionist tendencies. Need to keep him busy and quiet for several hours? I guarantee he will not move until that 700 piece Lego is complete. Not for fire or flood or bathroom emergency. But that is his collection, not mine, after all.

I even debated whether my garden could be considered "a collection." I do have a quite a few plants, and many of them are unusual. I love to garden and can rarely resist a new and interesting plant. I have a small yard, so I generally buy only one or two of each plant, which lends a "collection" sort of air to my garden, but really, I'm not a plant collector. I buy plants for their beauty and adaptability to my garden, not for their uniqueness or value.

In the end, I decided that the only thing I really collect is...yarn. I buy it to use it, of course, but that cannot account for all of it. There's lots of yarn in the stash that I will probably never use--yarn that I bought, not because I had a project in mind for it, but because I simply loved it. And, let's face it, there may be more yarn in there than I ever can realistically use, especially since I continue to buy more yarn, and at a rate that may be faster than the rate at which I am actually using yarn. The jury is still out on that, though. I've been forced to conclude that my yarn may be the only thing that I truly do collect, so even though it is painfully unoriginal (at least for a knitting blog; I suspect it may be a little more unusual in the world at large), here is My Collection: 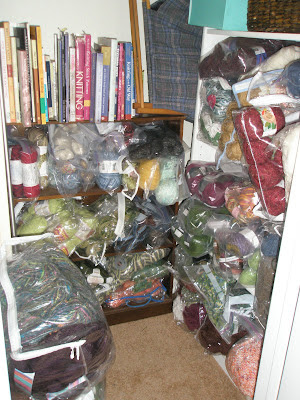 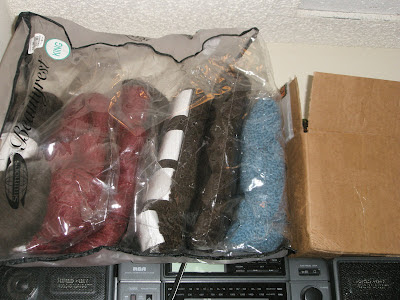 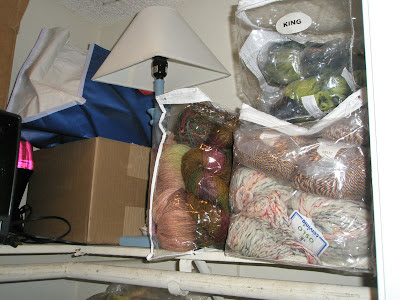 This does not, of course, include the yarn that is currently in use, sitting in project bags or baskets, stuffed down beside the couch, or already knitted into completed projects. It also does not include the spinning fiber. That is in a separate stash near the spinning wheel. We're talking yarn, here, not fiber.

I'm sure many of you will be surprised that the stash is so small. Others may be surprised that it is so large. Stash size is relative, and personal (see "a lot" above). I think my stash is moderate. If I were to cull the yarn I don't like or don't think I'll use, I could cut it down by a third. If I were to add all the yarns currently on my wish list...I'd have to move.
Posted by Yarnhog at 7:30 AM

and so beautifully organized!

I love it when people flash their stash. It looks like you have the yarn very well protected from moths. Is that a pink lava lamp in the bottom picture?

Alright, now I have stash envy!

I think you have a very nice collection. I like how you have it organized.

Thanks for encouraging me on my spinning. I look forward to the time when I can spin smooth,even yarn.

You know, I think our stashes are about the exact same size!

One of us has to have a yarn collection!! I would consider your garden to be a collection. I've never really thought of it that way but you spend time lovingly choosing each plant. That's gotta mean collecting.

It think what is interesting about that post is that a "collection" by your definition has to be an aggregation of unusual, high-value, or otherwise unique items. From one lit major to another, if those bookshelves are plural, and full, then you have a book collection. The fact that they are dear to you confirms it.

I think your garden is beautiful; I'd consider it a collection. But maybe I have a broad definition of collection.

I hear you on collecting. If I *collect* anything it is because I want to use it. Just having it to have it, bleah -- takes up physical and psychic space. That's what museums are for. My house is for living.

Having said that, like yours, my only real collection is of yarn, and my stash is, I think, roughly the same size as yours. Perhaps that is the optimal size stash for a non-collector...