At last. This has been done for about two weeks, but I only just got pictures. 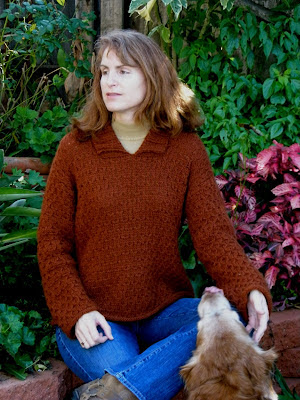 Yarn: Believe it or not, Elsebeth Lavold Chunky Al, the exact yarn called for in the pattern, in color 006. 13 balls, which is what I had in the stash. I ordered two more, thinking I would run out, but the Knitting Goddess loves practical jokes, so I had plenty--and two more balls still en route. Anybody know what to do with two balls of chunky alpaca?

Modifications: Not too many. I lengthened the body by three inches and the sleeves by one inch (a mistake, by the way. They grew a lot after wet blocking. At least my hands won't be cold.) I added waist shaping. And the observant may notice that the collar on my sweater is not the same as the collar in the picture I showed you here (scroll down for a link to the picture on the designer's website). This was not really a modification. It was more an accident. But it works for me, so we'll call it a design choice, 'kay? 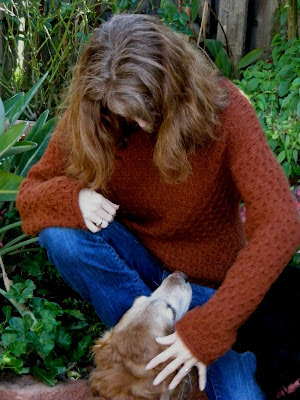 Thoughts: The pattern was perfect (despite my not believing this and the resulting "design change" to the collar), and the yarn was just lovely to work with. Very soft and surprisingly drapey, but a little prone to snag, since it's a softly twisted single ply. I don't imagine it will be terribly durable, but it is a pleasure to wear. The only weird thing--and I'm not crazy, several other people have confirmed this--is that the FO picture in the book clearly shows the stitch pattern as a diamond lattice. In reality, it is a square honeycomb pattern. See? 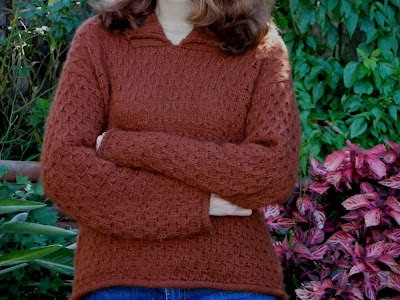 I triple-checked my reading of the instructions, and the designer even calls it a honeycomb pattern. But the picture shows something very different. Odd.
Posted by Yarnhog at 10:27 AM

That is really beauitiful! I hadn't seen that pattern before...I like the drapiness of the finished sweater. Me, myself, and I have just had a conversation in which" I" was reminded by "me" and "myself" that I have 2 unfinished sweaters that need attention before I can even think about taking on a new project. They're no fun!!

Wow! That looks beautiful on you!
You have a very cute dog too.

I think this must be my most favorite of you fo's! Nice nice nice.

Love it! It looks very soft, warm and comfortable. I haven't tried that yarn yet. But I bet you will have much swappage opportunity for your leftovers on Ravelry.

What a beauty! Love the pattern and it fits great. That is very weird about the FO in the book. It's a completely different pattern.

I love that sweater. Looks warm and cozy. Sounds like really nice yarn to use and the color is great on you!

How did you get both the sleeves done? I'm on my 3rd try on my second sleeve.

That looks nice and warm. The color looks great on you too:) The knitting goddess is cruel at times and good sometimes. Hmmmm... I'll look at my one skein book to see if there's anything you can do with the two extra balls...

I like the overall design and the collar adds a nice touch to it.

Oh, that is absolutely lovely! Odd about the pattern/photo disconnect, but the result is great!

I'm glad you are enjoying the book. I love almost all of the patterns in it.

Ah, love that yarn, and that shade. The sweater looks great - a classic.

I agree it looks really diamond lattice in the picture.

The sweater is fabulous. One day I am really going to go over to your house to get some knitting done.

I think the collar modification is brilliant - especially since the high shawl collar in the original would be way too hot here, especially in alpaca - looks really nice and cozy. I'll think good thoughts for continued cool weather, at least for another week or two!

The PERFECT color for you, what a fantastic achievement!

your sweater looks lovely. i like your collar better than the one in the picture. great job!

ok that is one of those beautiful sweaters you can wear over and over again.
i love it.
fabulous job!

Beautiful sweater, and the model is pretty nice too! :-) Looks great!

I love it! And I love your collar, too - makes me want to knit one!

Ooooh, very pretty! And I like the change you made to the collar very much. Beautiful job! :)