Some time ago, in the throes of an online yarn sale, I ordered some bulky alpaca-wool boucle yarn. A lot of it. Don't look at me like that; I had a plan for it. I wanted to make this jacket for my mom. I thought she would like it, it would be a good Christmas present, and it would be great for wearing in her freezing cold office in the winter. I liked the jacket so much that I decided I would make one for myself as well. (It was a sale.) So I ordered some cream-colored yarn for her and some brown for myself and waited impatiently for it to arrive.

When it arrived, I discovered that the color I had picked for my mom's jacket was bad. Ugly. Like a dirty sheep, only not as pretty. So I packed it up, schlepped it to the post office, paid the postage, and sent it back for another color. And I waited impatiently for it to arrive. I refused to cast on for my own jacket, because, all evidence to the contrary, I am pragmatic and realize that the chances of my losing interest in a project before the end are high, and the chances of my ever managing to repeat the same project are low. Getting my mom's jacket done was my first priority.

Finally the yarn came. It was just what I had hoped for--a sky blue the same shade as her eyes. Perfect. I immediately wound it into balls and cast on for a swatch. (I do swatch. See "pragmatic" above.) And that's when things started to go wrong. The yarn seemed unusually stiff. And difficult to work. And produced an unpleasantly uneven fabric. And my hands and wrists were aching before I even finished the swatch. I changed needles. Plastic. Bamboo. Metal. Straight. Circular. Different sizes. Finally, I wadded up the whole mess and stuffed it in the back of the stash closet to age, like a fine wine. Clearly, this yarn was simply too new. It needed time to mature.

And so it sat, for months, until last night. I was lying in bed with my seven-year-old, in his sky blue and brown bedroom, doing our nightly Harry Potter reading, when it occurred to me that a warm, knitted afghan would make his bed much cozier. A warm, sky blue and brown alpaca-wool afghan, to be specific. As soon as we were done reading, I dove back into the stash and pulled out the yarn. I collected a variety of needles and headed downstairs to watch Jurassic Park for the umpteenth time and swatch. I tried different needles, different sizes. I knitted tightly. I knitted loosely. I ripped and reknit and ripped again. By the time the helicopter finally arrived to rescue the scientists from the velociraptors, I had this: 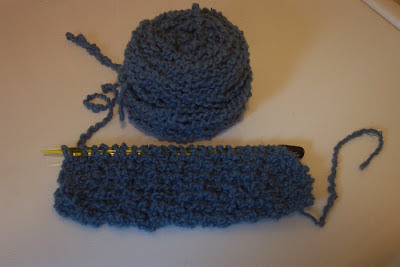 A two-inch by ten-inch strip of stiff, lumpy knitting. My hands and wrists were throbbing and I was not having fun. Since this is the first of 28 balls of this yarn, the future of the afghan was not looking bright. And then I had a radical thought. What about that thing I used to do with yarn that wasn't knitting? The thing with the hook? 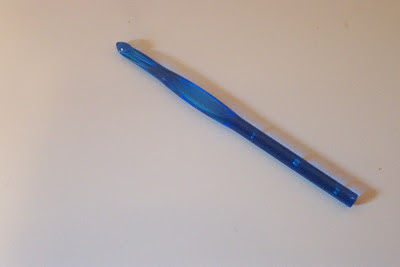 Like many knitters, I know how to crochet. I learned as a child in the 1970's, when everyone knew how to crochet. It was like macrame and long hair. You couldn't avoid it. But once I learned to knit, I stopped crocheting, because knitting is--what's the word?--oh, yeah. Better. So much better. Once I picked up the needles, I turned up my nose at the humble crochet hook and never looked back.

Last night, in my desperation, I crossed back over to the dark side. In half an hour, I had this: 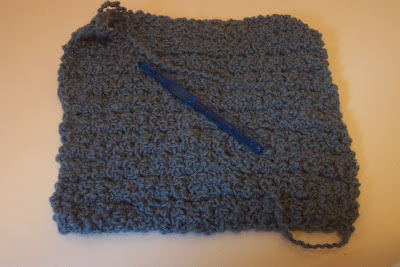 A ten-inch square, perfectly suitable for a warm, fluffy afghan. At this rate, my son will have his new blanket by Thanksgiving. And with the boucle yarn hiding the stitches, you could almost mistake it for knitting.
Posted by Yarnhog at 9:16 AM

Macrame and long hair, the two main signifiers of the 70s!!

Glad this tale had a happy ending. I was worried. The colour combination is going to be awesome!

What an epic tale! It has it all: plans gone awry, pain, doubt, worry, a beast (the 28 skeins!) and finally triumph. Were you smoking another 70s signifier when you ordered all that yarn?!

I sometimes am glad that the C-word is part of my vocab. Sometimes I miss it. Time. I need more TIME!

That is going to be an awesome afghan. Lucky kid.

For the love of fiber, you do what you gotta do.

I'm going to check out the great mofo delurk

good for you for finding a good solution for the yarn that could sat in your stash until the end of time. can't wait to see the finished blanket.

Being pragmatic, you've no doubt mastered the art of not adding stitches at the end of every row. This I can not do. I can only work crochet in circles.

I think it will make the perfect blanket! What is it about November that just screams BLANKETS!! I want to make about a hundred blankets but i have Christmas knitting to do. *Sigh* I can't wait to see your finished blankie. :)

Oh wow... crocheting a blanket! That takes guts. I don't know if you remember my "blanket that completes our love" story... It was a crocheted blanket in double crochet that sucked the life out of me.

Yarn is patient. It waits for the right project to come along.

I'm glad you got something going with the hook. I had to put mine down for a while now. The "dark side" let go of me and I'm back in knitters world. :) Good luck on the blanket.

Uh oh. You've crossed over to the dark side. ;) Welcome! Heehee

I must say that the ONLY large project I ever finished was a crocheted afghan! I learned to crochet before I learned to knit, and even left-handed I found it much easier, faster and more forgiving---and SO much easier to work in circles!

I think it's great to use whatever method for the afghan that works best for you and the yarn---if that's crochet, it IS much faster so go for it!! It looks like it's going to be great!

I secretly long to work up some stuff with "the C-word," but unfortunately, it ramps up my forearm tendinitis to unbearable levels....otherwise I think there would be more mixing of crochet and knitting around here! I've never been a loyalist to one craft---used to LOVE macrame', beading and pine-needle basketry....yes, another child of the 70's! :)

Yup, I learned to crochet in the 70s, too. It makes great afghans, though -- thicker and warmer than knitted. And did you know there is a word for your blue and brown color combination (which sounds great, btw) -- chocqua! Chocolate and aqua.