My son's room is done! 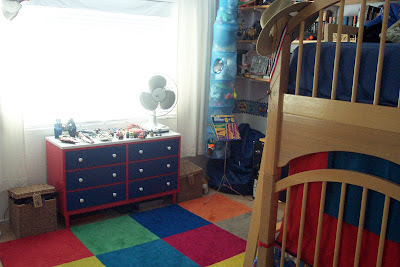 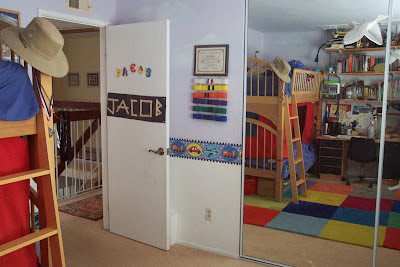 My older son is ten years old. Although this was a great room for him even before the makeover (although a bit messy), there were a couple of problems with it. First, the walls had not been painted since we moved in eight years ago. Can you see the puffy clouds on the baby blue walls and ceiling and the toddler transportation-themed border? It was really cool when he was three. Second, the dresser is way too small. It never occurred to me that kids' clothing gets bigger as they do and requires more space to store--until recently, when I could no longer fit even his relatively modest wardrobe back into the drawers on laundry day. So the plan was new paint and a new dresser, with a bit of cleaning and reorganizing.

The hardest part was clearing out the room so that I could paint. Unless you've done it, you cannot imagine how much stuff accumulates in a kid's room over the course of eight years. 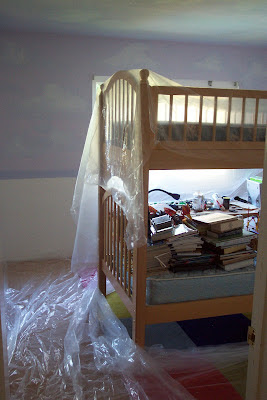 By the time I got to this point, I had completely filled the guest room and the upstairs hallway, as well as several trash bags. I also discovered some unpleasant truths about children.

They have dirty hands: 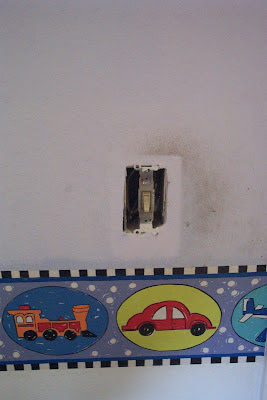 And they wipe...things...on the walls: 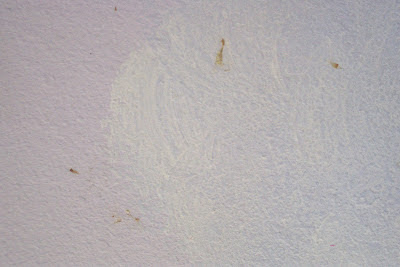 I have my suspicions about what these rock hard, greenish raisins stuck to the walls actually are, but when you are the one scraping them off, it's best not to think too much about it. 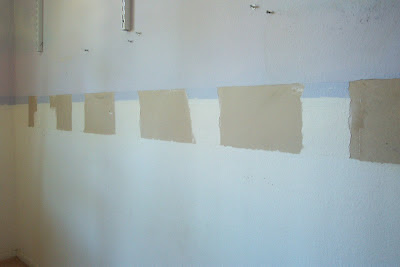 Not to worry, though. A can of spray-on texture and a coat of primer and no one will ever know the difference. 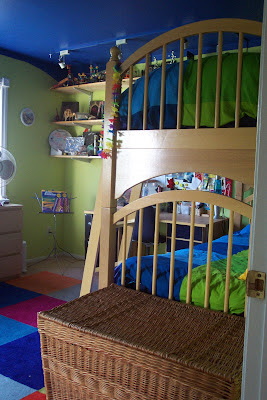 In the above picture, you can just see the corner of the IKEA dresser that took me all afternoon to assemble. Here's a slightly better shot. It's almost impossible to get a picture of anything located under this window: 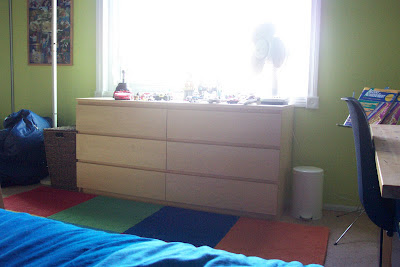 It is one of those flat-packed things that comes in a shoe box, weighs a thousand pounds, and, with the aid of 10,000 fasteners of various sorts, assembles to create a life-sized replica of the Titanic. It is a lot bigger than the old dresser and easily holds all my son's clothes without the need for complex origami folds. 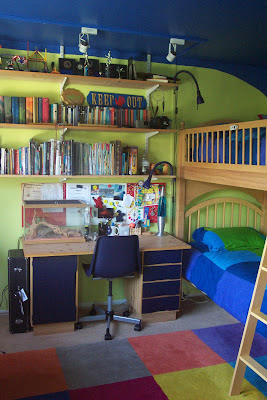 You may have noticed that the ceiling does not yet have its planned constellations. We are still in negotiations about those. On the whole, though, I'm pleased with this makeover. No major changes, but a nice update for little money in a short time. And just because I'm so pleased with how well it all coordinates, here is another shot of the swatch that inspired the makeover: 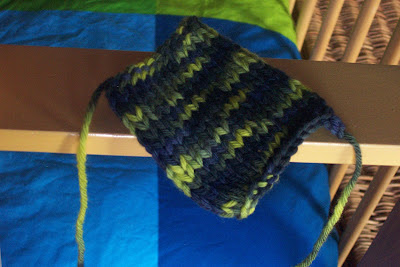 Is there any question as to what I'll be casting on next?
Posted by Yarnhog at 8:36 AM

I know how much stuff adds up over the years. That's why we move every couple of them and then weed out. The other good thing about military housing is, that the walls are white and when we leave they get repainted - white again. But then, you can't really get that creative either, because it's not yours to stay at. Nice job on the redo.

That is a very cheerful room. I like the tent effect on the ceiling. And you have to love Ikea for kids room solutions.

Awesome redesign!! And when I was his age, rock hard, greenish raisins were my specialty;)

I really love the paint colors! And the carpet. Fast too, takes me ages to get anything done over here. Course your kids can take themselves to the potty, so that helps.

I am totally in hysterics about the Titanic.

that looks like a great place to nestle in.

Well I was just looking over your list of 100 things about you and while I didn't see the word I was looking for, "over-achiever", it's pretty much inherent in your list.

Anyway, the room looks awesome! I bow down to your talent and productivity which both far surpass anything I could even hope for.

Do you know how I paint (or more acurately don't paint)? I start thinking about all the prep work, the moving stuff, and all the hidden stuff (not to mention anyting green or goopy I might find)... then I get overwhelmed and cast on for a new pair of socks.

Great job -- can I be your son? I especially love the way you extended the blue ceiling onto the walls a bit. Creative, yup, that's you! (and fast!)

Oh wow!! You did a really, really nice job!!

What a lucky kid!

i love ikea.
and
when we went to sell our old house, the one "they" grew up in? I was amazed at the dirty hands and feet goo I had to scrub before the first showing.

Great job! Looks like a super 10-year-old boy room to me. Heck, this (mumblemumble-year-old) mom wouldn't mind it!

What an awesome remodel! The blue and green look great together. Lucky son!

Great job! What a lucky boy and now he can wipe boogers on the lovely green walls and they will blend in. I love that you took a picture of the dried boogers.

I love the curved painting you did near the ceiling! That's so cool! If that whole lawyer thing doesn't work out, you could certainly interior design...

Great job. When we painted our daughter's room with a blue ceiling we added the wallpaper planets. They come in little circles that you place around the ceiling. Easy to put up and yes they did come off later without too much work. The company is called Wallies. Just Google "wallies space" and you'll et a bunch! I also like to paint rooms - quick satisfaction.